The place is here

In his exhibition at the O Space in Lahore, Syed Hussain paints portraits of family that stay away from explicit identity politics, but even then it is hard to fully escape the traumatic past 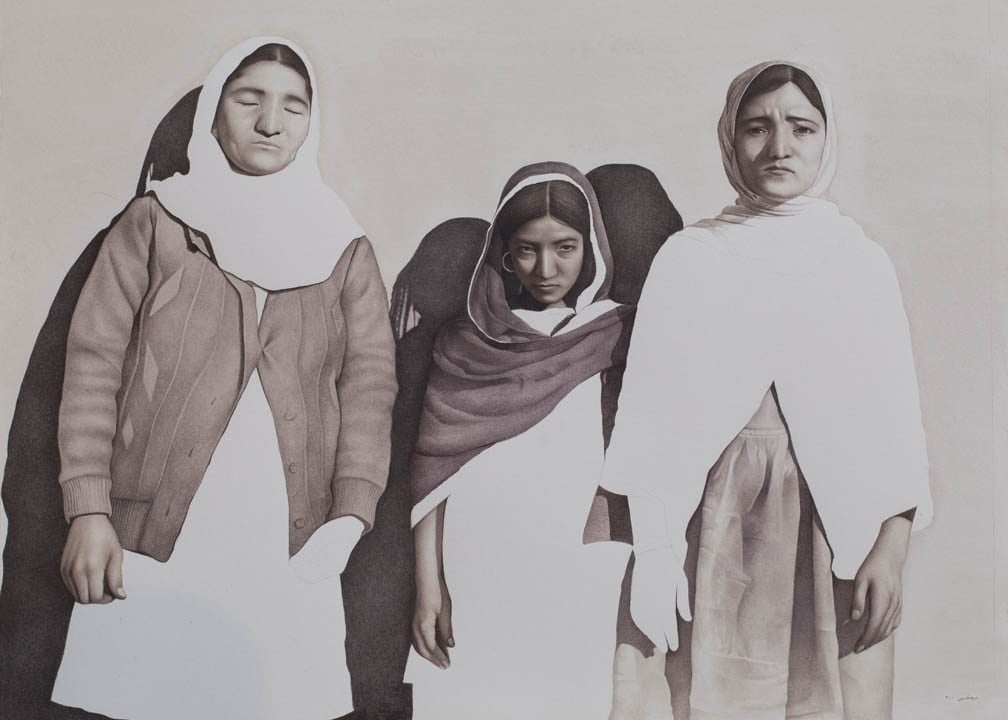 The family has a dual status. It is both a legal structure and the framework for interpersonal relationships, and in recent times more emphasis has been placed on its emotional aspects. The connections between the family and painting have been evident since the popularity of the medium; painting quickly became a family activity, and the family portrait was one of its recurrent subjects.

The portraits of newly-weds and new babies made up the paintings that had been kept and handed down from generation to generation. They followed set rules governing background décor, and the way the figures were arranged, rules that defined a genre that was imposed on the obedient subjects. Meanwhile, the amateur became one of the steadfast practitioners of family portraiture. While the studio painter was involved only on special occasions, the amateur recorded the little events that made up the fabric of everyday family life. Traditionally, it was the man of the family who took on the role of keeper of its collective memory. Both studio and family portraits were a form of social celebration: they recorded the stages at which new members were integrated into the family - through marriage or birth - and reinforced the sense of belonging to the group.

The register that informs Syed Hussain’s exhibition at the O Art Space in Lahore, entitled ‘Under The Same Sky’ is that of painters who find their subjects in their immediate family circles. Painting and photography of one’s kith and kin has become an established genre, whether it attempts to tell a story, to describe a personal bond, or is an aesthetic project that forms part of a larger scheme of things.

Being a dissident member of the Hazargi (from Hazarajat in Afghanistan) community residing in Quetta, Hussain observes the people with whom he lives on a daily basis, and, in most cases, before significantly turning to the outside world, devotes himself to studying those with whom he is so closely involved. It is hardly surprising therefore that members of the family the central figures in many of his paintings on show, as if Hussain was appropriating from classical painting the traditional image of the holy family. They are the living embodiment of the passing of time during a period when personal identity as well as communal identity could be at stake.

Hussain’s practice is based on visual narratives of family life, whether improvised or carefully planned. The moments of daily life are recorded in all their profound ordinariness. We are not surprised, therefore, to find people of the Hazara community with their Mongoloid features portrayed in the everyday settings of their domestic lives. These settings, or the objects that inhabit them, sometimes become motifs illustrating some aspects of family intimacy. Hussain has ended up creating, in this way, a family album in which past and present overlap. But, unlike any ordinary family album, this is not exclusively addressed to the family it portrays, but also to the anonymous spectators who give it its status as a work of art.

While Hussain, in his statement, admits being the ‘odd man out’ in his country by virtue of his physical features, accent and tone of speech being member of the Hazargi Shi’ite community living in near-siege in Quetta, and has experienced dissociation, alienation and isolation, but he has not chosen to present images that illustrate the rifts, the conflicts, the tears and the hatreds that mark the intimate family lives led behind closed doors by the Hazara community. If there is a sense of propriety that sets a limit to the representation of private unhappiness, is that to say there is no public for such a subject?

Nostalgia for the past and an affectionate view of the present seem to be the abiding moods in Hussain’s waslis. Hussain’s sentimental journey to uncover his past led him to search his ancestral archives. He collected legal documents, affidavits, thumb impressions, signatures, official stamps, typed-out information alongside hand-written one, and photographs that had ‘mutilated’ with time.

Veracity and human resilience (read compromise) underpin Syed Hussain’s art; many of his works subvert established histories and appropriate familiar imagery to realise a contemporary relevance. The sepia tones of gouache on wasli rendered as miniatures are reminders, or memorials, of a hidden collective trauma, even if Hussain doesn’t like dwelling on them and making active political statements. Throughout his work, the harrowing past still haunts the present - enigmatic but always in plain sight. Cleverly enough, Hussain secures the identity of some of his subjects by masking out their facial features, especially in Shanasnama - e – Awwal and Doyam. He is surely dispensing some political lesson. Surely there’s some reflexive point to be drawn from the negative spaces - a chance to contemplate the delicious urgency of ‘the issues.’

The place is here