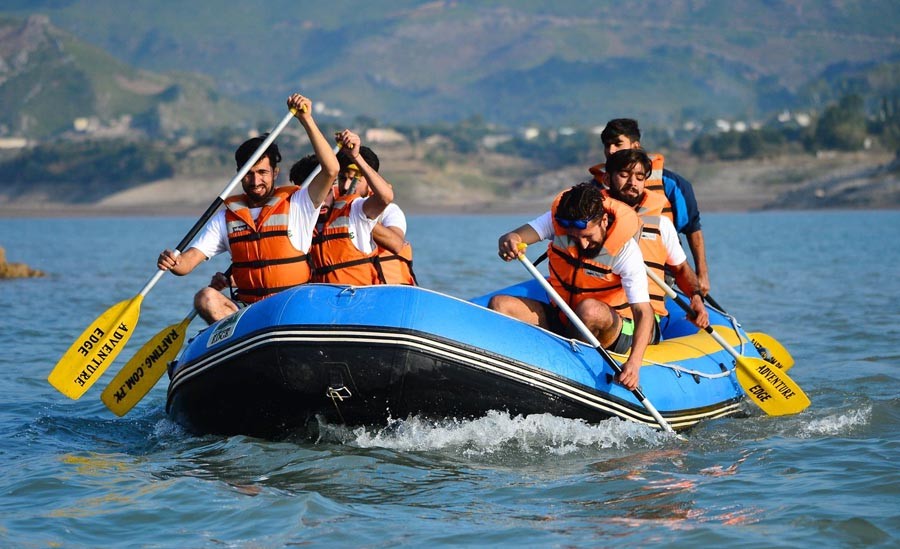 On a winter morning towards the end of November, 60 enthusiasts of adventure sports warmed up in the Margalla hills. They were participating in an unconventional sporting event -- a day long adventure marathon involving three different activities: hiking, mountain-biking, and rafting. It was forecast to be a dry day, a welcome sign after the few days of rain, presenting a splendid opportunity to enjoy the natural beauty of Islamabad and Khanpur. I was a volunteer supporting the event but as we were about to get started I found I was just as excited as the participants.

The young and the young at heart

The participants were a mix of students and professionals from different parts of the country, including Peshawar, Gilgit, Islamabad, and Lahore. Most of them were male and in their twenties. However, there were also a few women and some men closer to 40 but young at heart. Quite a few of them had participated in a similar event held earlier this year and were eager to beat their previous best.

Hiking up and down the hills

The marathon started with a hike of more than 10 kilometres in the hills, starting from the village Talhar, on the outskirts of Islamabad. It was quiet and green all around. We were on a jeep track but one without any traffic. One felt so close to Islamabad’s Blue Area and yet so far away. The teams had to hike up on a winding path up to the Karwali Top and then walk down to the other side to Tunya village.

TCKP and Adventure Edge are collaborating on a range of projects and are testing out this concept of an adventure marathon. The concept is in its infancy and the budgets are small.

We were sending the 5-member teams off at regular intervals. This was the longest of the three activities and perhaps the hardest. Breathing deeply and sweating profusely, the participants were trying to jog uphill and run downhill, no mean feat. Some were much faster than others, but you could tell that everybody was having fun. I found that there was a cricket pitch right in the centre of the trail near the highest point but there was no time to play. Most participants took between 60 to 90 minutes to complete the hike. Their energy was infectious. Seeing them give it their best, I also picked up pace and did it in just about 90 minutes.

Mountain biking on a jeep track

After the completion of the hike, the teams had time to regroup and relax. They were taken to the starting point of the cycling challenge in vehicles and served tea and biscuits in a makeshift camp site next to the beautiful Khanpur lake. Everyone was all smiles.

Now it was time to get on mountain bikes for the next phase. The challenge here was to maintain balance while retaining speed. If you pushed too hard, you could take a fall, hurting yourself and ruining the team time. If you did not push hard enough, you would pile on unwanted minutes. You also had to be prepared for the unpleasant surprise of a motorbike or car that could (and did) somehow show up and slow you down. Most teams managed to complete the cycling between 12 to 15 minutes.

Rafting in the Khanpur lake

If hiking tested the stamina and cycling tested the skill of the participants, the rafting tested their team work. The water level had dropped to a surprisingly low level in the lake but it looked stunning as ever. Each team of five was to paddle the rubber raft from where they finished cycling to the end point of the marathon near a hut. The water was more or less still but the challenge was syncing your rowing. If you did not know how to manage the raft, you would be going round and round in the same place clocking up time and wasting your energy. To avoid the novice members exhausting themselves and getting adrift in the lake, the organizers lent some help. Each raft had one staff member who steered the raft in the right direction. That made the task a lot more doable but the need for team work remained. The fastest teams completed the task in just about 9 minutes while the slowest team took 16 minutes.

There were only a handful of women who joined the marathon. What they lacked in number, they made up for in performance. They made the hike look like a walk in the park. Smiling and singing, they kept a highly competitive pace. This was no fluke. They had been actively participating in sports at their university to earn this edge.

It was the second of its kind event organised through a public-private partnership between the Tourism Corporation of KP (TCKP), the public-sector sponsor, and Adventure Edge (Pvt) Ltd, the private-sector technical expert. It was a highly subsidised event for the participants with a registration fee of Rs3000, which covered one night stay at the youth hostel in Islamabad, meals, snacks, transportation, and organisation.

TCKP and Adventure Edge are collaborating on a range of projects and are testing out this concept of an adventure marathon. The concept is in its infancy and the budgets are small. I think it would probably be unfair to draw comparison with similar events held internationally. I could see that there was room for improvement, but I also think one has to give the organizers the credit for taking a new idea this far. The participants were also willing to overlook minor irritants, showing their sportsmanship.

Finally, the wait was over and the result was out. It was to a mix of cheers and tears that the Deputy Secretary of TCKP and AC District Haripur along with the CEO of Adventure Edge announced the winners and distributed prizes of Rs20,000, Rs15,000, and Rs10,000 to the three top teams. The real winner of the day, however, was the enthusiasm and sportsmanship of the Pakistani youth who made this adventure marathon a success with their wholehearted participation.