Que Rico offers an array of Spanish dishes to select from, but the uninitiated might need to spend some time on the menu 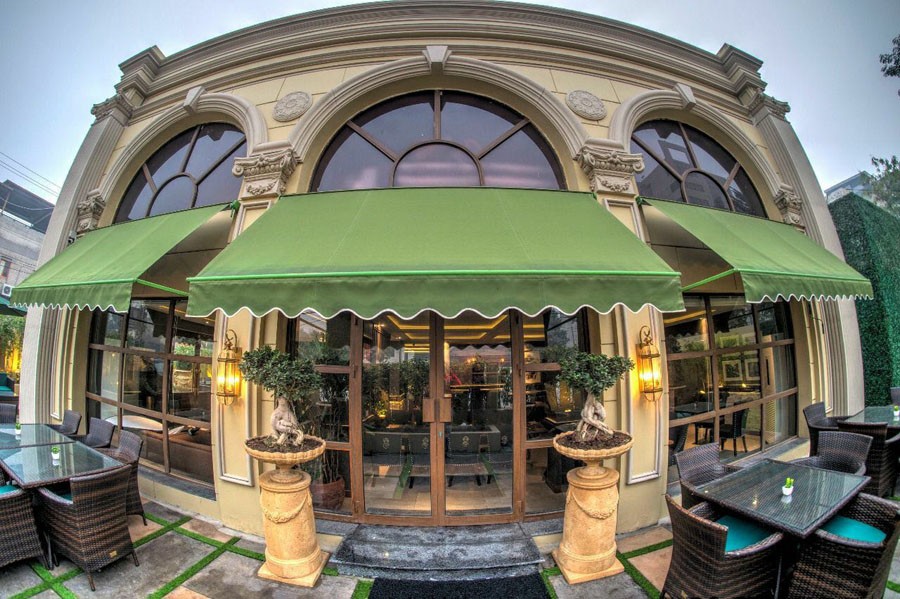 ‘Que rico’ is a Spanish language phrase that means ‘delicious.’ So, when you have a restaurant by this name opening in the city, you are bound to be attracted.

For a proud Lahori and a big foodie at that, I was obviously intrigued by this peculiarly named and particularly built (you have to see it to marvel at its architecture!) eatery on MM Alam Road.

Inside, charcoal grey and white dominate the space reinforced by the use of stonewalls. Framed black&white photographs hang low variously from the ceiling. The restaurant has been neatly divided into sections -- the outdoor seating is quite spacious; there are small candles on the tables that flicker, adding a romantic feel to the ambience; while the ground floor exudes a certain old-world charm making it a perfect dining spot for families.

A project of Taha Zamir and his Kashmiri wife, Que Rico offers the diners an array of Spanish dishes like tapas, paella, and tortellini to select from, but the uninitiated (like myself) might need to spend some time on the menu. When I visited the restaurant, the server explained a few things to me.

A trip to Que Rico is incomplete if you haven’t tried their desserts. I had the pleasure of having torrija -- made with bread soaked in eggs and milk, with caramel sauce poured over it, and a dollop of vanilla ice cream. It’s surely worth every bite.

Earlier, while entering the place, I met live musicians that were playing outside. I thought they added an interesting character to it. They were followed by a couple of very dapper ushers, dressed in traditional Spanish outfits.

I must especially mention Que Rico’s vast selection of mocktails that proved to be delightful. Their sweet and sour apple mint, with a dash of lime juice, is simply divine.

The original menu consists of chili ginger, passion fruit, and sangria made of non- alcoholic red wine, orange, peach, and cinnamon powder. I chose basil strawberry mojito with pomegranate on top. For me, it scored full marks -- it had a great flavour and an extremely balanced taste.

I learnt that the owners had hired a Michelin star chef consultant from Spain to curate authentic dishes. Francisco, who runs a noted restaurant in Spain, had prepared croquetas, traditional tortilla, espanola, edamame, ratatouille, grilled ostrich with beetroot puree, churros, and torijja.

Breaded and fried cream cheese and mushroom filled croquettes served with parmesan and bell pepper sauce gave me a jumpstart to lunch. I didn’t quite like the portion of edamame (beans) that had been tossed in rock salt with paprika and garlic seasoning. I found the salt content quite high.

Up next were sliced pepperoni twirls done with just the right amount of mozzarella, and herbed tomato sauce baked in soft dough. What gave it its true taste was some fresh pesto topped with fried onions, sliced cherry tomatoes, and balsamic reduction.

Tortilla Espanola is said to be the national food for the Spanish people, and vies for attention mostly known for its mild taste but extremely rich choice of ingredients. In simple words, it’s a slowly cooked omelette, prepared with spinach, potatoes, plenty of eggs, cheese, onions, and garlic. The potatoes and onions are slow-fried in olive oil then mixed with the beaten eggs. Once you’ve tried this you’ll remember the taste. Still, I wished it had been served with bread or garlic roll to complete the experience. It scored high on my list, anyway.

Spanish food is low on spice content, so I am not sure if the place will appeal to the traditional Lahori’s palette. Que Rico’s main menu is largely composed of sea food specialties, including salmon en papilotte, galletto alla diavola, chicken roulade, etc served with three mini-burger sliders in beef, chicken, lentil or quinoa patty. The sliders are colourful and exciting to look.

Tortilla beef wraps, served with salsa fresco, cheese with peppercorn, coriander seeds and vinegar, are a meat lover’s delight. Only an experienced chef would know how to slice the selected meats and make best use of the sauces and seasonings.

You cannot end your meal without having their signature chicken paella. It is served with Arborio rice, a mushy mixture, and cooked with saffron, smoked paprika, and capsicum. It’s a comfort dish in the chilly winters.

A trip to Que Rico is incomplete if you haven’t tried their desserts. I had the pleasure of having torrija -- made with bread soaked in eggs and milk, with caramel sauce poured over it, and a dollop of vanilla ice cream. It’s surely worth every bite. Don’t also miss Spanish Churros, accompanied by hot chocolate; a combination that is crispy golden brown on the outside and soft, gooey inside. They claim that the chocolate and strawberry dessert, which I tried and simply loved, is not to be found at any other restaurant in the city.