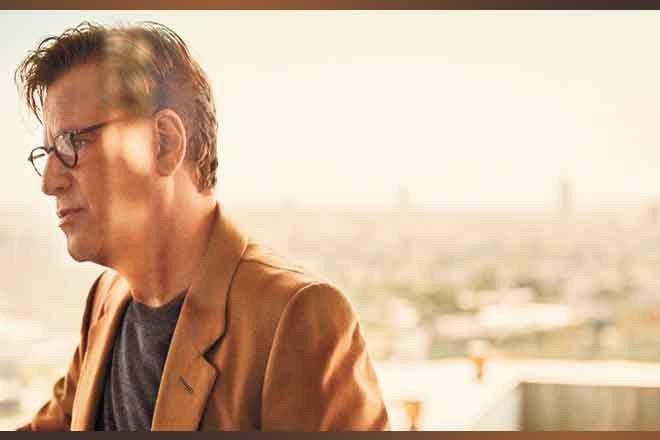 Hollywood’s most celebrated and scrutinized screenwriter ups the ante for his directorial debut as he floats a ‘West Wing’ reboot (with a black president) and reveals the anxiety that fuels his ambition.

On a late summer evening, Aaron Sorkin wandered into a pizza shop, folded himself into a counter seat and ordered a plain slice, with a Pepsi to wash it down. He was stomach-grumbling hungry and in need of a distraction.

Down the street, at the Toronto Film Festival, his poker thriller Molly’s Game was playing for the first time before a crowd of some 1,500 festivalgoers. Sorkin didn’t need to be in his reserved seat at the Elgin Theatre to know exactly where in his film the audience was. He took a knife and fork to his slice -- "a mortal sin if you grew up in New York," he acknowledges, but he couldn’t risk a spill on his premiere-night suit -- and began, in real time, running through the movie, the first in his three-decade career as Hollywood’s most celebrated and scrutinized screenwriter that he directed as well as wrote.

"Did I ever change that thing I wanted to change?" he panicked. "That sound right there of the skate on the ice, did we get that right?" His mind raced, concerns ping-ponging between the response of the audience and that of the film’s inspiration, the infamous poker princess Molly Bloom, who was seeing the fictionalized retelling of the bleakest chapter of her adult life play out for the first time in a packed theater.

"I was very nervous," Sorkin says more than a month later, seated in his dimly lit office on the Warner Bros. lot in Burbank, surrounded by framed photographs of his heroes: Arthur Miller, George Bernard Shaw, Tennessee Williams and Hunter S. Thompson. Dressed in his uniform khakis and a button-down shirt, his eyes gaze toward the window: "I’m still very nervous."

When Sorkin’s directorial debut, starring Jessica Chastain and Idris Elba, comes out on Christmas Day, its success will be measured against the unfairly high bar of his own past work. "I’m proud that when I write something, expectations are high," he says, "but it’s not an advantage." The fact that Molly’s Game tests an entirely new creative ambition -- Aaron Sorkin, movie director -- only raises the stakes. For the 56-year-old auteur, whose name is synonymous with a certain hallmark style of percussive dialogue and whose association is damn near a guarantee of widespread attention, the ability to experiment quietly is a luxury he gave up long ago. Sorkin doesn’t need those images of Miller or Williams or Shaw looming above to intimidate him; he does that all by himself. "Whether it’s an episode of television, a movie or a play, I always feel like my life depends on writing something good," he says, "and in a very real way, it does."

At this point, the industry’s highest-paid screenwriter, who earns $4 million a script (and another $1 million if the film gets made), could make a fine living by simply rehashing his past successes. He already has agreed to tackle a live staging of his first breakout, A Few Good Men, for NBC, though now he reveals he’ll need to push back its planned spring 2018 airdate another year. Filling out a cast led by Alec Baldwin (as Col. Jessep) has proven a challenge, and he can’t quite figure out how to make the 1980s-set play feel fresh.

There’s also a standing offer from the same network to reboot The West Wing, which Sorkin considers on occasion. When asked if he’d introduce a Trump-like figure in his fictional White House, he winces, arguing that the current president holds no appeal for him, fictional or otherwise. "Trump is exactly what he looks like: a really dumb guy with an observable psychiatric disorder," he says. Sorkin’s preferred scenario, he tells me, would involve "Sterling K. Brown as the president, and there’s some kind of jam, an emergency, a very delicate situation involving the threat of war or something, and [President] Bartlet [played by Martin Sheen], long since retired, is consulted in the way that Bill Clinton used to consult with Nixon." How he brings Allison Janney’s C.J. Cregg or Bradley Whitford’s Josh Lyman into the new scenario is where Sorkin gets stuck. So, for the time being, fans will have to settle for reruns.

To Sorkin’s amazement, Molly’s Game came considerably easier, though not without its own backstage drama: He battled over the release date, cut ties with longtime agent Ari Emanuel and watched as emails referencing his alleged financial woes were picked apart in the wake of the Sony hack. But now the film is done, and all he can do is sit back and wait on the audience -- to say nothing of the awards groups, which are already screening the movie and will determine its place in this year’s wide-open Oscar race. "It’s this huge weight on his shoulders," says Molly’s Game producer Mark Gordon, who also produced Sorkin’s last screenplay, Steve Jobs, "because the expectation from everybody is, ‘If it’s Aaron, it’s going to get nominated.’"