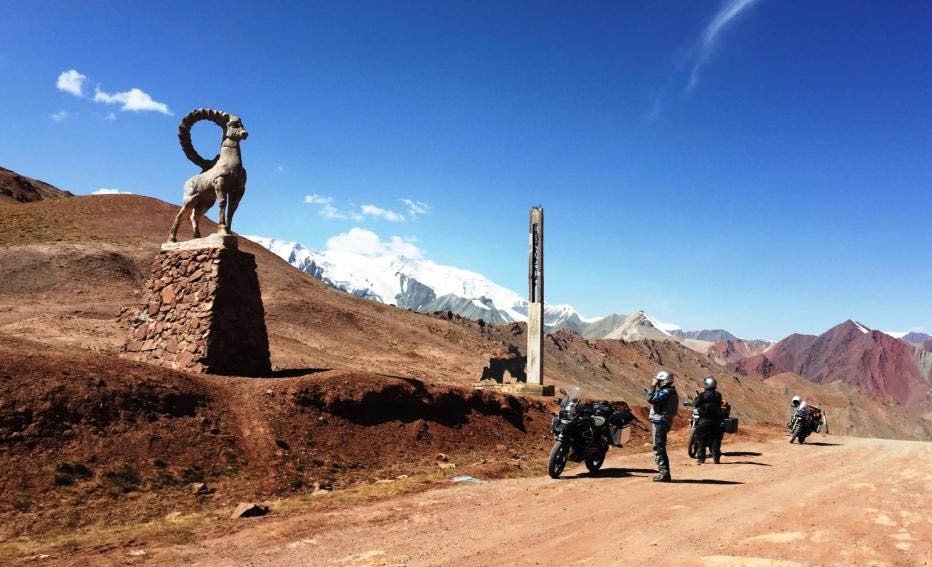 Sven Hedin, the traveller and artist who wrote Through Asia inspired me to visit the Pamir Mountains. The decision to see the Pamir Highway on two wheels added extra flavour and excitement, since on a bike one is part of nature and able to interact with the air, smells, and scenery on a different level.

Contrary to the corollary, the shortest distance between two points is not always a straight line, and in case of the Pamir Highway, ‘Roof of the World’, it traverses through a few countries. Over 2,000km long, the road also known as M-41, historically starts from Mazar-e-Sharif in Afghanistan and terminates in Osh, Kyrgyzstan.

It is the road that also formed one link of the ancient Silk Road trade routes.

Our preparation for the trip started almost a month in advance. The first major undertaking was to obtain visas for China, Kyrgyzstan and Tajikistan, and to prepare our adventure motorbikes for the 5,700 km long journey. To begin with, six motorcyclists showed their willingness to embark on the expedition but in the end only three of them were able to obtain visas and fulfil other official formalities in time.

The bureaucratic Chinese Immigration and Customs took almost two days to clear our motorbikes in Tashkorgan, the Chinese border town 120km from Khunjerab.

Ideally, the trip should have started from Afghanistan but due to the political situation, we had to forego the segment of the Afghan part of the Pamir Highway. To further compound complications, the only border crossing between Tajikistan and China, Kulma Pass, is not open to foreigners. To access Tajikistan, we had to cross China first, and from there make our way to Kyrgyzstan.

The ride started from Lahore on September 9, 2017, with a night stop in Batakundi, Naran, we reached Pasu the following day through the Karakorum Highway. Surprisingly, the Customs and other officials at the Sost border were very helpful and facilitated our passage swiftly.

We crossed over the Khunjerab Pass, 15,300 feet above sea level, the highest border crossing in the world, and entered the Chinese side of Khunjerab.

On this side though the over-bureaucratic Chinese Immigration and Customs took almost two days to clear our motorbikes in Tashkorgan, the Chinese border town 120km from Khunjerab.

Thanks to CPEC, the Karakorum Highway in China has been lately rebuilt with new road alignment, providing spectacular views of the Muztagata Mountain. It is over 24,000 feet above sea level and is situated at the northern edge of the Tibetan Plateau.

With a short spell in Kashgar in the Xinjiang province, we exited China the following day through the Irkeshtam Pass. That night we stayed in Sary Tash, the border town in Kyrgyzstan. At the local home-stay, we were welcomed by the traditional yak meat and milk, and the following morning a wholesome breakfast was prepared for us by our hosts with local breads and goat cheese.

Everyone was excited about the ride as we were going to start our sojourn on the legendry Pamir Highway from Sary Tash. The border crossing at the Kyzylart Pass was a breeze and staff at the Tajik border very welcoming. To enter the Gorno-Badakhshan Autonomous region a special permit is required besides the visa, which we had obtained online before departure.

Tajikistan is covered by mountains of the Pamir range, and more than 50 per cent of the country is over 9,800 feet above sea level. Mountains cover more than 90 per cent of the country. Halfway at noontime, we stopped at Karakul Lake and had a warm lunch. With temperatures touching freezing point, the meal reinvigorated us for the journey ahead. We covered a distance of 230km from Sary Tash to Murghab in 10 hours, including the border crossing. The elevation of the road varied from 10,000 to 15,000 feet above sea level. The road that was made up of loose gravel, ruts and tarmac patches with potholes posed a gruelling challenge for us men and our machines, and turned out to be a test of our stamina and skill.

This part of the Pamir mountain range has several peaks over 20,000 feet, including Pik Oktobarskyi, Kul Dzhilgatau and Peak Lenin. Murghab is the only significant town in the eastern half of Gorno-Badakhshan region. It is the highest town in Tajikistan at 11,900 feet above sea level and is located at the junction of the Murghab River and the Pamir Highway. In 1893, the Russians founded the place as Pamirsky Post, their most advanced military outpost in Central Asia.

The Tajik language is a variant of Persian and closely related to Dari Persian. Many words from Urdu are common, although the hotel staff spoke English, so we didn’t have to exercise our Darri comprehension skills much.

After spending the night in Murghab, we went to the local bank to exchange currency the following day and later visited the local market, which consisted of makeshift steel containers, reminiscent of the Soviet era.

The next destination was Khoroug, 320km away from Murghab. We passed through the Pamir range on our north, and the Hindu Kush Range and Wakhan corridor on our south. The gentle rolling landscape of the area, pastures with grazing yaks, and snow-capped mountain peaks in the background were mesmerising. We stopped several times to capture the scenes and to absorb the tranquillity of the region.

The weather was cold but sunny when we left in the morning but after being on the road for over two hours, the temperature started to plummet and went close to freezing, with snow flurries raging all around us. This slowed us down a great deal, but thankfully these conditions only lasted for an hour or so, and the clear weather brought us some respite.

The lunch stop at Alichur at the local home-stay comprised of vegetable soup (shorba), naan, palao and green tea. The naans are usually served cold and are had with hot shorba. Tajik cuisine is very mild and is similar to Afghan and Uzbek food.

From Alichur, at over 12,000 feet the road went downhill until Khoroug at 7,000 feet above sea level. We crossed a few small villages on the way without any traffic except for some bicyclists and motorcyclists from Europe and Russia. On the way, we saw many peaks of the Hindu Kush range including Kohe Hevad, Lunkhoe Dosare, and Kohe Urgunt all over 20,000 feet. Khoroug is also the capital of the Gorno-Badakhashan Autonomous region and the Soviet-styled city roads are lined with huge Poplar trees. It took us nearly nine hours to reach Khoroug.

The following day the journey started along the Panj River to Kalai-Khumb, which was nearly 250km away. The landscape changed as we were descending, as more vegetation and flora started coming into view. The ruggedness of the mountains started mellowing gradually, and along the Panj River we saw a border crossing leading to the northern side of Afghanistan. It took seven hours to reach the newly built modern hotel in the Kalai-Khumb, which was our last night stop before Dushanbe.

The next day while travelling to Dushanbe 280km away, we saw rolling fruit orchards and state-owned agricultural fields on both sides of the road. Our first task in Dushanbe was to look for a tire for my bike, which had developed cracks on the sidewall while travelling on the long stretches of gravel and ruts of the Pamir Highway. Surprisingly, we were able to find a tire close to the size of my bike’s rim, and we managed to change it at a local autoshop.

Dushanbe is the capital and largest city of Tajikistan. It means Monday in the Tajik language and from 1929 to 1961, it was called Stalinabad. The old Maple trees on the Soviet-styled wide roads of Dushanbe makes it a very attractive city.

After two days of rest and exploring the city of Dushanbe, we left for Khujand 300km away, and now our ride was off the Pamir Highway.

Khujand is one of the oldest cities in Central Asia, dating back about 2,500 years and situated on the Syr Darya at the mouth of the Fergana Valley and was a major city along the ancient Silk Road. This region is very fertile and full of vineyards and orchards, which can be seen from the highway. Unfortunately, our night stop in Khujand was very brief and we were not able to explore the city.

The following day we left early in the morning since we had to cross the border between Tajikistan and Kyrgyzstan at Batken to reach the city of Osh 370km away. After crossing the border around midday, we stopped in a small town and had a fabulous meal at a roadside food place, which was run by an Uzbek woman. Due to close proximity with Uzbekistan, the two countries have many people living and working on both sides of the border.

Mughal emperor Babur was born in nearby Andijan city, in Fergana Valley.

After spending two days in Osh, we were back on the M-41, to ride on the remaining 190 km of the Pamir Highway and reached Sary Tash in the late afternoon to complete our 1,350km long journey on the Pamir Highway. The return voyage from Sary Tash took six days, and we reached Lahore on September 30, 2017.

It took us three motorcyclists from Lahore a total of three weeks to complete the journey across three countries, to ride on the legendry Pamir Highway and to strike off this destination from our bucket list.