Food and business on the go

Food trucks are a new phenomenon in Lahore. Eat Me is tipped to feed it even better 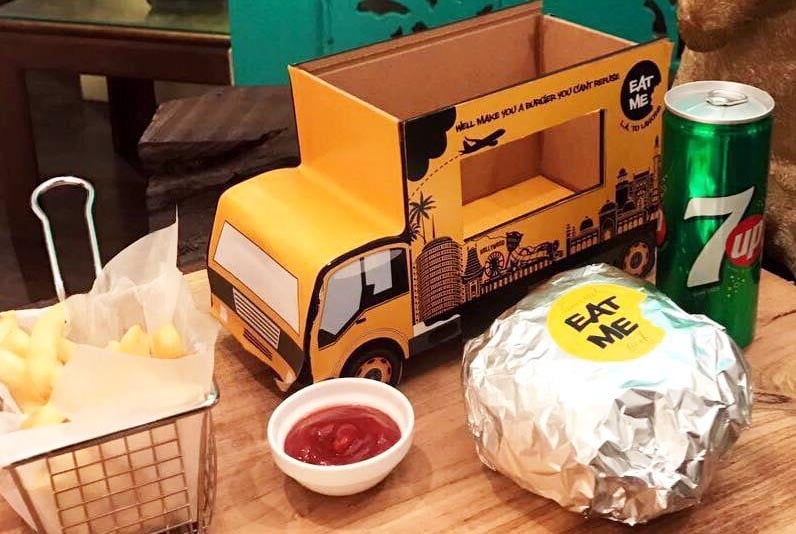 Strictly speaking, a food truck is ‘a restaurant on wheels.’ But it is certainly a lot more than that. For the customers, it’s a mobile eatery which they may not need to go it, as it shall find them.

Across the world, we see many food truck companies as well as popup shops doing increasingly well. In Pakistan, it’s an attractive idea with lots of potential for business waiting to be tapped. Eat Me, one such mobile restaurant that deals in fast food, is set to change the way the Lahorites go café-hopping.

It’s the brainchild of Khalid Sulman, a young Lahori with a passion for cuisines, who says he travelled all the way to Los Angeles, USA, where he discovered that creating the perfect burger is an art.

His partner Bilal Mukhtar reveals how together they would treat their guests at home to some amazing food varieties. "Every time the people gushed about what we offered [to them], we were motivated to do even better." Eventually, they launched the food truck.

From business point of view also, it was a safe idea, as it required less financial investment -- compared to a full-service restaurant -- in terms of both space and overhead costs.

Burgers have come a long way since McDonalds. Eat Me dares to depart from the conventional, fried-patty stuffing and experiments with light, crumbly buns with sesame seeds on top.

As Mukhtar says, it begins simply with getting a truck -- a used one, in good condition, will also do. Sulman is the entrepreneurial chef at Eat Me.

Instant customer feedback was another factor the enterprising duo cared for. A food truck seemed to do the needful for them. Besides winning a loyal clientele that will religiously follow the truck’s location online, Sulman and Mukhtar are hoping to be able to "hold food carnivals [in the future] that shall attract people also because of side activities such as fun rides for kids and plenty of seating space for families."

Though, the Lahorites’ initiation happened two and a half years ago, with the launch of the Food Truck Company, Sulman is sure Eat Me shall give it "healthy competition."

Eat Me’s menu is small but exclusive. It basically offers a range of burgers, each marked for its own USP. I ordered their much-talked-about ‘pulled Punjabi burger’ -- an all-beef, shredded undercut that is served with crispy fries and a chilled drink.

This spicy burger was topped with finely chopped seasonings and herbs. The zesty taste of coriander, green chilies, and a dash of ginger is actually good for the digestive system. Never for once did it feel heavy on stomach, like most beef burgers do. For me, that was a great start.

There was a layer of melted cheese and a fried egg on top to enrich the offering.

Burgers have come a long way since McDonalds. Eat Me dares to depart from the conventional, fried-patty stuffing and experiments with light, crumbly buns with sesame seeds on top.

The chicken variety is available in both gourmet patty and pulled Punjabi option. Though, my love for their beef burger is only growing.

The price of a meal is Rs450, a fairly affordable one, it goes down for the vegetable burger.

It is hard to imagine a veggie burger without an ‘aloo’ (potato) patty, the one at Eat Me is a departure, again. Its apparently thick patty turns out to be soft in the middle and crisp on the outside, with the yummiest filling of cottage cheese, mushrooms and gherkins.

It’s time for you to follow this food truck that may be stationed near you. They also do home delivery, but the best bet is to have it on the spot, piping hot, made live, right in front of your eyes, by the chefs.

Food and business on the go