Where there is a will 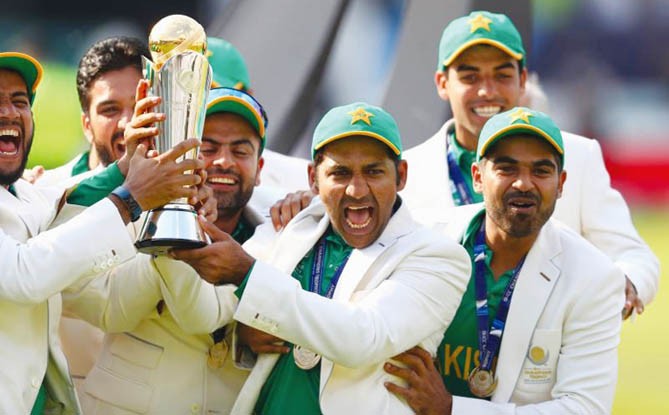 Pakistan cricket team entered the Champions Trophy in England as the lowest ranked side earlier this summer. No one would have bet for the men in green, especially after they lost their match against India.

But, as it happens in fairy tales, the men in green shocked fans around the world, beating the top-class Indian side in the final comprehensively.

The team not only received heroes’ welcome on its return but also received lucrative cash prizes from the government and private entities. But it didn’t stop at that.

In the process of putting up a splendid show, they sent a message to the world that Pakistan would keep on fighting -- play them at their home or not.

The cricket officials that love cricket and the players that worship the game realised that by depriving the nation of Pakistan of international action, they were actually not serving the game.

Darren Sammy, the former West Indies captain, summarised it by saying that the players involved in the World XI that played in Pakistan were part of something more important than just their selves.

"We have a reason, a greater cause," said Sammy, who led West Indies to two ICC World T20 titles. Sammy said this series could play an important role in bringing international cricket back to Pakistan.

"I believe Sri Lanka and Windies are also planning to travel to Pakistan, and if the government, the security agencies and cricket authorities there can keep the momentum going, it won’t be long before we have full-fledged tours there," he said.

So, hopefully cricket is now steadily returning to Pakistan. The aura around Team Pakistan extends to more brand value. Marketers and students of marketing can easily understand that sponsors are attracted to this aura. Brands want to be seen around achievers and for the same reasons a normal person wishes selfies with celebrities.

Accept or deny this phenomenon, the high or low ‘fandom’ of a team actually decides the level of sponsorship.

Former England skipper Paul Collingwood, who is also a part of World XI, has said that "no-one can pretend the money isn’t great". PCB has definitely raised money from its sponsors.

Decision-making is a complex process and it could not be scaled down to one simple reason. A decision of a foreign world class player to visit Pakistan must have depended on several reasons.

The players who were part of the World XI were assured of security. Otherwise, no amount would have convinced them to land in Pakistan. "What’s there up for grabs?" would certainly be an important part. And finally a more abstract reason but an important one -- that we are playing our part for the betterment of the game of cricket.

"Trying to help Pakistan is important for cricket -- and no-one can pretend the money isn’t great -- but, added to that, playing them in their own backyard also really floated my boat," Collingwood said in his column for ICC.

There’s no denying PCB has always received better sponsorship as compared to other sports’ federations in the country. But the federations and the board faced the same problems following the 2009 terrorist attack on the Sri Lanka team.

However, cricket has been toiling out of ignominy with the team’s performance. The PCB has also been criticised for having outdated, inefficient infrastructure. However, players are coming with an aim to make their presence felt.

There’s a lesson to learn for other sports’ players in general and the hockey team in particular. Aim for good performance and prove your mettle in the international arena. Everything else will follow.

Despite having been in ignominy for a couple of decades, Pakistan hockey team is still the most successful side in the world. Pakistan is still one of the most successful nations in the history of squash. Talent just cannot dry away. Many cynics didn’t expect Pakistan could beat India in Champions Trophy final. But it did. Likewise, our hockey team and other sportspersons could also do it. And all of them need to know that fortune do changes with good performances.

Sarfraz Ahmed, who led Pakistan to the Champions Trophy title, was struggling to get a chance when he was part of the World Cup squad in 2015. He did put up impressive performances in some games. And now he has become the captain in all three formats of the game!

Where there is a will there is a way. That way will always remain open. It depends upon our sportspersons and officials. Are they able to see that way?

Where there is a will