Hope kept bringing me back to K2 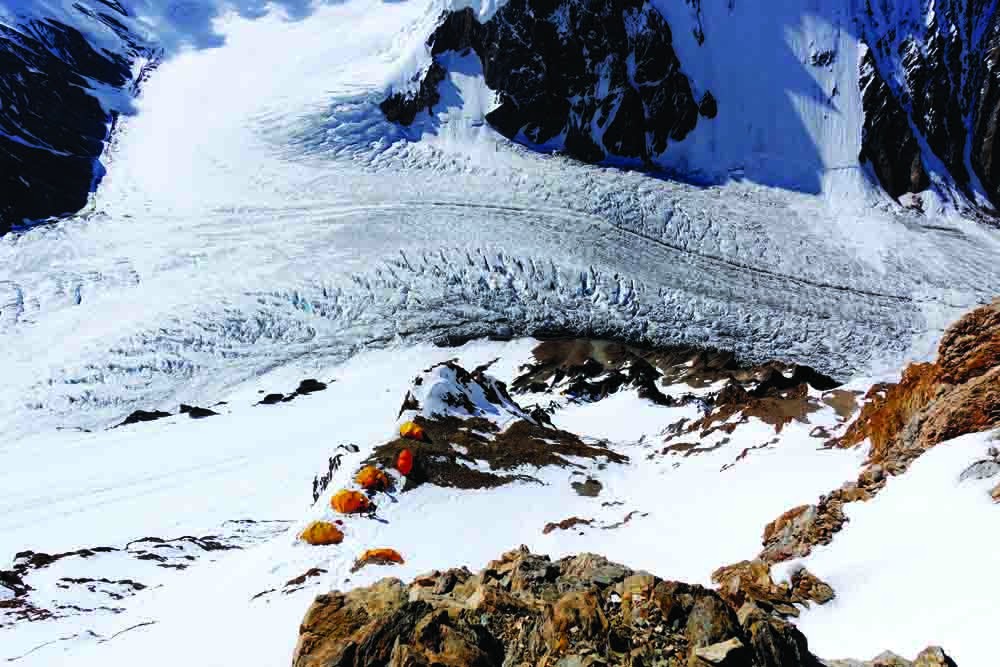 On July 28, 2017, Pakistan was interested in one news story only: The disqualification of erstwhile Prime Minister Nawaz Sharif by the country’s highest court. They missed out on another historic story. On that day, Vanessa Audi Rhys O’Brien, a British-American mountain climber, explorer, public speaker and former business executive became the first American and British woman to successfully summit K2 --- the second-tallest mountain in the world. The story created well-deserved waves in global adventurers’ circles as Vanessa has already climbed the highest peak on every continent and has a Guinness World Record for doing so in 295 days, setting a record for the fastest time a woman first achieved this goal. She has also completed the Explorers Grand Slam in 11 months, becoming the first woman to do so in under a calendar year and the 8th woman in the world to accomplish this. Two weeks ago, Vanessa presented the Pakistani flag she hoisted at K2 to Pakistan at a specially-organised ceremony at the Pakistan High Commission in London. The News on Sunday spoke to her about her recent adventure and her impressions of Pakistan.

The News on Sunday: Congratulations on summiting K2, the mountain many believe is the killer peak. What kept you coming back despite faltering twice?

Vanessa O’Brien: What kept bringing me back to K2 was progress and hope. Every year we made more progress than the year before; say being able to establish Camp 2 in 2015, then higher to Camp 3 in 2016. That set an expectation that more was always achievable with the right amount of determination, patience and hard work. We also accumulated knowledge each year and could learn from any mistakes. Although the conditions were very different every year, we stayed on the same (Abruzzi Route) - so there was ongoing accumulated knowledge of where each camp should and shouldn’t be placed.

TNS: Did earlier unsuccessful attempts make K2 a "personal battle" for the climber who has already scaled the seven highest peaks in seven continents?

VOB: K2 was different; it didn’t work the first time so in a sense it became a personal battle. In 2015, logistics and weather (El Niño warmer temperatures) wore us down. In 2016, things looked great until bad luck and poor weather wiped away all tents, oxygen, supplies and equipment with an avalanche at Camp 3. This year my health was worse as I recuperated from three torn tendons on my rotator cuff, preventing full use of my right arm. I also had a fractured sacrum and a dodgy knee. So that phrase "There will always be next year", well… maybe! But you might not be in the same shape or your luck may be running out (or building up!).

It is an honour to be called a Real Ambassador for Pakistan and this is not something I take lightly nor have I earned this label elsewhere. I think Pakistan is a special relationship for me.

VOB: I believe there are three great motivations for participating in extreme adventure. First, to prove to yourself that you can reach your goal after putting in the hard work and training. Second, for more commercial reasons --- raising money for charity, bringing attention to a good cause (UN Women / Peace, Solidarity and Friendship between Pakistan and US/UK) or promoting or testing a product. Finally, to contribute to science by advancing medical or environmental knowledge. Mountaineering does not offer money, fame or fortune. In fact, it will deplete resources! Despite being an obvious place for sponsorship because of the messaging -- getting to the top, being number one, rising up for the challenge, etc. Sponsors are afraid to engage in high altitude mountaineering because they cannot be bothered to mitigate risk. What if he or she dies? And it is a shame because little risk equals little return.
TNS: Most sporting people challenge other humans. You decided to challenge yourself and nature. Any particular reasons?

VOB: In many sports there is obvious competition and usually two teams. Team 1 competes against Team 2, using an agreed upon set of rules, and produces a winner and a loser. High altitude mountaineering is very different and therefore appealing. First, there can be many teams who may or may not collaborate, and more than one winner or loser per game (or season). Said differently, my summit does not preclude someone else from summiting - which is the beauty of it! Both conventional sports and mountaineering have aspects of teamwork, but I see more leadership opportunities in mountaineering because it lacks structure - those agreed upon set of rules found in conventional sports. Mountaineering doesn’t have a league, a coach or a set way of training. Furthermore, to win in mountaineering depends on things outside of your control like the weather, which would drive most people nuts. But it makes one flexible and adaptable. Finally, because our season or game lasts 6 to 8 weeks - the mental and psychological strength of character can be a higher predictor of success than physical aptitude.

TNS: Compared to Tamae Watanabe -- who set a world record by scaling the Everest at 73 -- you can be termed a teenage mountaineer with multiple world records to your name. But isn’t 52 [years] extra-ordinary for such extreme activities?

VOB: High altitude mountaineering tends to skew towards those in their late 30s to 40s. This is because high altitude expeditions take 6 to 8 weeks which is a fair amount of time for anyone to take off work and older people are generally in a position to do this or delegate at work. Second, expeditions incur some expense, as high as $50,000 and up. That means someone has to have some disposable income --- not always, but more likely that is an older person. Sherpa, guides and HAPs will be younger because they are working in the industry. I did most of my climbing in my 40s, and would even have summited K2 just as I was moving from 49 to 50, if I summited the first year. As we touch on psychology -- it is worth noting younger climbers may lack maturity, experience and judgement while older climbers may struggle with health, speed and stamina.

TNS: You are one of the handful adventurers who have completed the Explorers’ Grand Slam. Can you explain it to readers what the phenomenon really means?

VOB: The Explorers Grand Slam is achieved by, at a minimum, skiing the Last Degree (111km) to both the North and South Poles, and completing each of the Seven Summits - i.e. summiting the tallest peaks on each continent. When skiing to the North and South Poles a minimum must be achieved - that last degree from 89 to 90 degrees North or South. It is preferential to undertake a full coastal trip to the poles - and that has many more rules --- whether you are supported, unsupported, solo, re-supplied, etc. Those trips take about 60 days and weather is brutal. The Seven Summits is more complicated because there are two lists - the Bass and Messner list - each having a different Seventh Summit. For many mountaineers including myself - that makes 8 peaks as we end up completing both Kosciuszko in Australia and Carstensz Pyramid in Indonesia.

TNS: Why would a mountaineer like you try the ‘smaller’ mountains after summiting the highest peaks?

VOB: First - smaller peaks can be much more technical and by no means easier! The same goes for unclimbed peaks - where routes have not yet been established. Both provide excellent challenges without the risks inherent in high altitude climbing. The other reason would be simply to take friends for fun or for training. Somewhere like the Adirondacks in New York have 46 peaks over 1,200 metres. In a case like that it would be simply the fun and pleasure of ‘collecting them all’.

TNS: Annapurna in Nepal and Nanga Purbat in Pakistan are considered the deadliest peaks in the world. Any plans to scale them in future?

VOB: Not at this time.

TNS: Over one-third of the world’s 30 highest peaks are situated in Pakistan. What can mountaineer celebrities like you do to attract international climbers to come to Pakistan and scale these peaks?

VOB: First is to let people know what is in Pakistan. As many as 160 peaks above 7,000 metres and many extraordinary glaciers will appeal to mountaineers as well as general tourism. Then it becomes about demonstrating a positive travel experience. As many as 100 international climbers come to Northern Pakistan every year, as do so many more trekkers from all over the world and as many as one million local tourists. I believe that a training centre for High Altitude Porters would be a game changer to build up mountaineering expertise and give confidence to international tourists, however, sponsorship is needed to make this happen. One to watch is China, which has invested heavily in tourism for Everest by building a mountaineering centre that includes lodging, restaurants, and a museum. This will be completed by 2019, three years ahead of the 2022 Beijing Winter Olympics.

TNS: Your public statements defy prevailing "conventional wisdom" about the country in recent years. Do you find international media treating Pakistan rather harshly?

VOB: International media is looking for stories that sell news. And sensational headlines get there first. But seeing is believing. If you want to see the real Pakistan, make some Pakistani friends, spend some time with them, and by all means plan a visit!

TNS: Access to Pakistan’s northern areas is considered a security risk for some time now. Were you nervous going to areas that petrify many?

VOB: Initially yes, in 2015, but not after I was there and had experienced travel in Pakistan. By now I have experienced every type of travel from walking 100 km from Askole to K2 Base Camp, taking a bus from Skardu to the Karakoram Highway, private cars and taxis, PIA internal flights, and even a C-130 cargo flight. All of it was safe. The Northern areas are very friendly and it is my hope that one day there will not be any disputed territories and the past can stay where it belongs - in the past!

TNS: You have recently been described as the "real ambassador for Pakistan". Do you find such warmth customary wherever you go scaling mountains?

VOB: It is an honour to be called a Real Ambassador for Pakistan and this is not something I take lightly nor have I earned this label elsewhere. I think Pakistan is a special relationship for me. If there is one good thing about my K2 summit taking three years it is that I had plenty of time to travel to Pakistan to fully appreciate and understand the challenges and opportunities the country faced. Mountains make excellent metaphors -- to what heights can we not rise or what challenges can we not overcome? I adore Pakistan and its people so I will be back to see what I can do to help, if and when appropriate. The writer works with the Jang Group of Publications.

Hope kept bringing me back to K2