Lost in a chaotic maze

Messy souks, beautiful architecture and rich history… A week in Morocco is truly a sensory overload 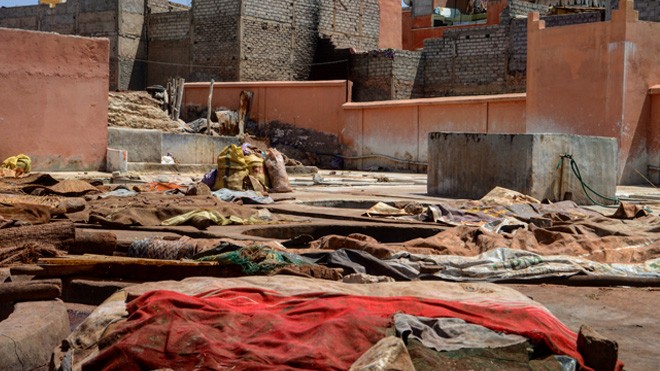 This January, my family and I escaped the cold British weather for a week, rode a camel, drank more mint tea than I thought was humanly possible, got lost in markets, and ate weird and wonderful delicacies. Winter was the perfect time to visit Marrakesh.

We stayed in a riad (traditional Moroccan hotel). Regular hustle and bustle on the outside, it is beautiful, calm, peaceful and cool inside.

Marrakesh is made up of Medina (old town) and Gueliz (the new town and high-street).

The Medina was magical. My senses were overwhelmed. Terracotta houses and shops lined claustrophobic streets filled with merchants, tourists, cars, scooters, bikes, donkeys, and street-cats. A few minutes in those dimly lit alleyways on foot had us completely lost. So we ditched the maps and enjoyed exploring. The deeper we ventured in, the more interesting it became.

The convoluted lanes had so much to offer: overpowering spice stalls, glimmering jewellery, live animals and street music.

The souks (markets) were also a navigational challenge. We tried using Google Maps but Marrakech is the kind of city that refuses to be defined by a map. But that is the appeal of the city, to always be lost. The best thing to do is just go with it. Take whichever direction looks the most interesting and dive in.

As bargaining is a huge part of the souk experience, I put my haggling hat on. The souks can get too intense. The noise, the smells and the constant attention were a bit overwhelming at times. There were shouts of "England!" "fish and chips!" and if you’re unfortunately wearing a GAP shirt; they’d love to educate you about what it really means "Gay and Proud" (the last one resulting in laughing fits) but it was in good humour, they didn’t mean to offend, and it wasn’t intimidating.

Part of the souk experience, I put my haggling hat on. The souks can get too intense. The noise, the smells and the constant attention were a bit overwhelming at times.

As the sun set, we would head down to the iconic square, Jemaa El-Fnaa which comes to life in the evening, despite what the words actually mean -- assembly place of the dead. It is a UNESCO World Heritage site and is the centre point of the local nightlife and cuisine. At first glance, it all seems chaotic with both locals and tourists always on the go watching street performances, playing games at the stalls, eating, shopping, getting henna tattoos, listening to live music and storytellers, watching snake charmers, magicians, monkey-shows and acrobats. It’s one of the most mesmerising people-watching places. Food stalls pop up all over the place selling delicacies to set your taste buds tingling -- each selling an assortment of Moroccan cuisine; ranging from tagines, spleen kebabs, goat heads and snails. It’s heaven for all gastronomic globetrotters. Freshly squeezed orange juice for four dirhams a glass was the best I’ve ever had.

Overlooking the square is the minaret of Koutoubia Mosque, a beautiful display of Almohad architectural style. It’s still an active place of worship, so entering without being dressed appropriately is out of question. However, we got a good view of its exterior.

One of the most exciting parts was heading out to the palm tree grove, Palmeraie, away from the city. We joined a tour that included a camel ride through the desert just 30 minutes away from the medina. Watching the sunset on the camel’s back in peace and tranquillity was one of the most magical moments of the trip. The tour also allowed us to stop over at a local’s mud house in the middle of the desert, where we had tea and our camels stopped over for a quick refill of their water-bank.

For a bit of fashionable history, we went to the Jardin Majorelle. This hidden garden was created by French painter, Jacques Majorelle and later owned by the French Fashion Designer Yves Saint Laurent. The garden has a collection of 300 species of plants. Strolling in this magical garden amid exotic plants and under shady trees was definitely the kind of serene escape and tranquillity I needed after a few days in the bustle of Medina. The terracotta tiles, and splashes of cobalt blue painted walls in the greenery served as the perfect backdrop for pictures.

The 15th century Ben Youssef Madrasa was definitely worth the visit. The college was one of the largest theological colleges of its time and contains geometric carvings and inscriptions. It was an amazing place to learn more about Islamic architecture with its beautiful tile and woodwork, colourful mosaic walls, and the tiny rooms where the students used to live.

Bahia, "the beautiful", was the next palace we visited. Although the palace has 150 rooms, only a part of it is open to public. I was awestruck as I wandered in the sweet-scented, beautiful courtyard garden with orange trees. The intricate artwork and ceilings, mosaic tiled floors and stained glass windows are breathtaking.

As established before, maps are no good in Marrakesh. So unfortunately, when we went on to find the largest Jewish cemetery and colony in Morocco that dates back to the 16th century and is still in use today, we got lost and never found the graveyard. However we stumbled upon a Jewish museum and wandered in the narrow alleyways of the colony.

Next up; we wrinkled up our noses at a local tannery. Most local tanneries are about 15 minutes’ walk from the souks but it’s almost impossible to find them on your own. A local kid showed us the way and then got annoyed when we didn’t give a big enough tip. Locals act as guides near the entrance and explain the leather making process. We were given a sprig of mint to help with the pungent smell as leather is bleached in bird droppings!

On our last day, we took a day trip out to go to the Atlas Mountains. It started with a challenging trek by a waterfall. But there was a delightful element of cultural immersion on this excursion as we witnessed unspoilt traditional Berber culture. Our host made the best Moroccan food we had in our whole time there. The meals were cooked in a mud oven over burning wood, which accounted for the strong authentic taste. The snow-capped High Atlas Mountains served as a dramatic backdrop.

On our way up, we were taken to a small shop selling organic Argan oil and got to see the oil being made by Berber women.

So yes, Marrakesh was large, messy, crowded, loud, intense and a chaotic maze but it was also beautiful, stimulating, and full of history, architecture and culture. It was a sensory overload and a truly hypnotising experience.

Lost in a chaotic maze