The challenge of gender inequality 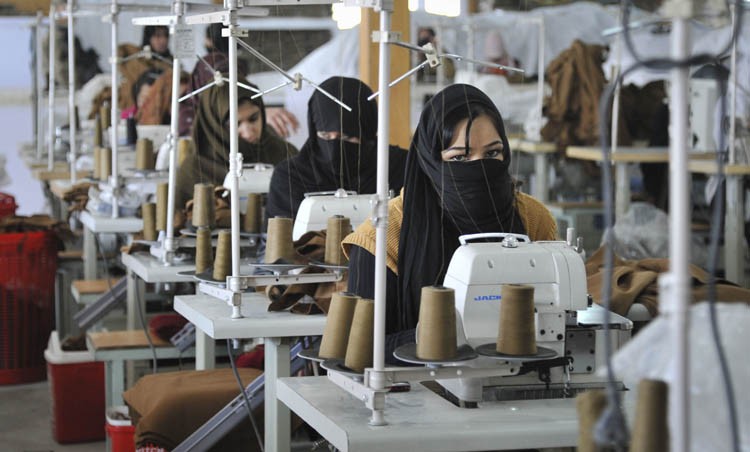 Despite the government’s commitments on gender equality, Pakistan’s ranking for gender equality remains one of the lowest in the world. Global Gender Gap Report 2015 ranks Pakistan at 143 out of 145 countries on women’s economic participation. 45.6 per cent of the Pakistani population is living below the poverty line. Women’s labour force participation is very low at 26 per cent excluding their informal work that is the key poverty mitigating strategy for poor households. Women informal workers are largely illiterate and lack financial independence. Violence against women is widespread in the country and 32 per cent married women experience physical violence.

Women employed in formal work in Pakistan face issues in travelling to work safely. Workplaces are generally not women-friendly. The organisations need to ensure that the workplaces are free of harassment and women workers have access to daycare facility. Women don’t have access to training opportunities to elevate to higher levels of work. Poor representation in terms of numbers and skills of women in trade unions leads to women having no collective voice for their rights. Labour inspection doesn’t capture gender dimensions of work adequately and therefore measure to address is missed. There are not enough women in mid management positions. Generally, the decision makers in private sector companies are not gender sensitive.

In Pakistan, social vulnerability juxtaposed with economic vulnerability keeps women underpaid and overworked, even when they overcome structural and social barriers to seek employment. The near invisibility of women in micro and macroeconomic policies compounds the issue, as the different initiatives of the federal and provincial governments are aimed more at income generation than bringing women into the economic mainstream. The situation warrants a deeper analysis of the data, and this report is an attempt to provide some detail to the twenty-six per cent of women recorded in the labour force in Pakistan.

The fears and reservations remained uniform for women of all ages. They feared snatching of their belongings while commuting by public transportation.

Homeworkers produce goods and services for both global and domestic supply chains. Under the most common sub-contracting arrangement, the homeworkers provide the workplace, pay for utilities, and buy/rent and maintain their own equipment. The contractors provide the work orders and raw materials, specify the product/s to be made, and sell the finished goods, or supply them to firms further up the chain. In most cases, the homeworker goes to the contractor to receive raw materials/deliver finished goods. In a few cases, the homeworker is herself a sub-contractor who splits the order and raw materials that she receives among other women in her neighbourhood.

Also, some sub-contracted homeworkers work together in groups: either in one woman’s home or in a common space within their neighbourhood. Whatever the arrangement, many homeworkers have limited knowledge of the markets and prices for raw materials and finished goods because they do not deal in these markets.

Most homeworkers are paid by the piece and the piece-rates remain very low -- far less on average than what factory workers in the same supply chains are paid. Moreover, unlike factory workers, homeworkers have to cover many of the non-wage costs of production (workplace, equipment, utilities, transport) and absorb many of the risks of production (delayed or cancelled orders, unreliable supply of raw materials, delayed payments, rejected goods). A recent study in three Asian cities found that transport represents one third of the operating costs of home-based workers. Also, homeworkers do not receive the worker benefits that some factory workers receive.

Similarly, domestic work is part of the huge informal sector in Pakistan. There are no clear estimates of the total number of domestic workers in the country, however, according to a study, every fourth household in the country hires domestic workers and majority of these workers are women (especially children). Moreover, according to an ILO study, around 4-10 per cent of total employment in developing countries is in the domestic work sector. Domestic work employs a large part of women workers. It is a widely held notion that the working conditions for women in informal sectors are not conducive. They are exploited and often paid less than their male counterparts.

Domestic workers face a wide range of human rights violations, excessive working hours, physical and sexual abuse. The work-safety and social security benefits should be given to the labourers as per the ILO standards, but the domestic workers, especially the women in Pakistan, are the most disadvantaged and exploited groups. At least 62 per cent of the children engaged in domestic jobs are girls, shows a study conducted recently by a local NGO under its rapid assessment project covering Islamabad and the four provincial capitals.

For decades, domestic workers in Pakistan were the most exploited among all workers, toiling long hours for meager pay and performing unappreciated tasks. These female domestic workers are mostly found working in the homes of the middle and upper class. They are relegated to the position of second-class workers, suffering exploitation and frequent abuse. Living in private homes, these workers are isolated and completely dependent on the people paying their wages. They are expected to perform menial work in accordance with strict rules and to suffer the consequences of straying from those rules.

Along with a magnitude of problems/issues which domestic workers face, the key challenge is the unawareness of their rights. With the growing realisation that domestic workers do not have access to their rights and entitlements, there is a need for recognition of domestic workers as registered labourers under the existing labour laws. They must be granted rights such as minimum wage, social security cover, safe and healthy working environment. Given the above context, there is increasing need for working towards the formalising of the informal domestic work sector in Pakistan.

In the pursuit of sustainable development and poverty reduction a critical challenge is to find a new balance between economic goals and the social protection of the world. Indeed economic growth is necessary for the advancement of human well-being. However, new approaches to economic growth must be based on new understanding of the vital role that a healthy, literate and secure society must play in creating conditions for economic progress.

The recent massive transit options introduced in Lahore have left us with a question as how the public transport is supporting the women who are moving daily and using the local transportation for meeting their day to day needs. How safe these public transports are for women to travel daily and, above all, are these means meeting the needs of women despite the fact that high proportion of budget is being invested.

Meeting few women who daily commute for work and use different means of transportation reported that they mostly take three wheelers from their homes or streets which are easier. They don’t use metros as the routes are not suitable. Though rickshaw rides are unsafe, women regularly use them.

The fears and reservations remained uniform for women of all ages. They feared snatching of their belongings while commuting by public transportation. For the metro bus rides, the limited space available for female passenger was an issue. In addition to this, all women reported being stared at by men on streets or in buses, at some point during their commute.

The challenge of gender inequality