Hamlet on a pavement 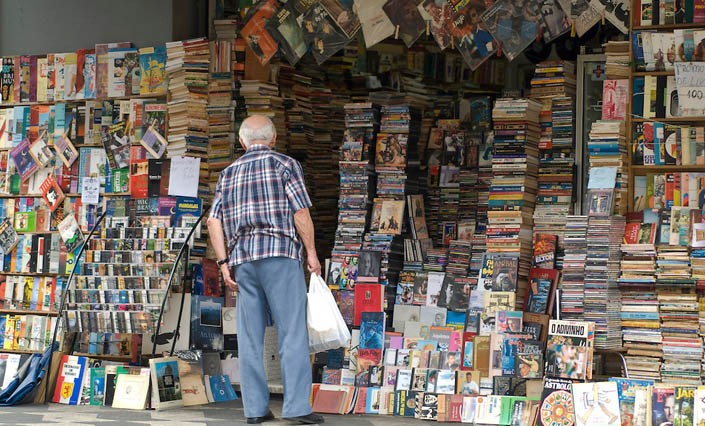 An opportunity to visit Brazil some years ago had set my pulse racing with excitement. My wife, who was going there to attend a conference, was kind to take me along.

There was Rio de Janeiro, shimmering in the distance. And this was to be my first encounter with South America. An entire continent had eluded my global wanderings!

So, what treasure of memories and images did I return with?

Yes, Rio was magical and it figured in my piece Cities of my dream and desire that appeared in this space nearly three years ago. I had a glimpse of the somewhat mysterious favelas -- shantytowns -- in Rio and San Paulo. There was the Copacabana beach, and also Samba music. Sadly, it was not carnival time in Brazil.

But after I returned, impressions about the visit that I would share with friends in casual conversations were dominated by something that I found very unusual: Along the avenues in the city centres of Rio and Sao Paulo, there were shops -- stalls or kiosks -- selling not just newspapers, tobacco, snacks and soft drinks but also books.

Because of my love affair with books, I looked closely though without any familiarity with the Portuguese language. One would expect a lot of local material, mostly detective fiction and romances. Yet, translations of classics from world literature had a dominant place in the display. I could also easily decipher magazines on philosophy and history. The magazines and the paperbacks had attractive covers and I saw customers browsing through them.

Another big surprise was that these wayside, stand-alone structures -- these kiosks -- were located after every few blocks and seemed to be an integral part of the urban landscape. I was astonished to see about the same selection at every outlet. That would show that there was a market at the popular level for serious and internationally acclaimed books.

When I tell my stories about Brazil and what I found different there, the pavement bookstalls present the other side of street crime, mainly in Rio.

This is about books being sold on the pavement. As such, looking for major bookshops and libraries in any city that I visit is my ritual. How this scene is changing in a digital world is a separate subject. In passing, though, I am happy to report that the sale of digital books is continuing to decline and the traditional book is regaining its deserved status.

In the United States, books and music retailers Borders went out of business in 2011 and the other leading chain of bookstores, Barnes & Nobles, is not actually thriving. On the other hand, independent bookshops are coming up in many western countries and libraries are alive and well in most places.

Now, my fascination with what I saw on the pavements of Rio and Sao Paulo is basically provoked by the dreary state of affairs that is evident in Pakistan. Why I am offering this glimpse of a literate and intellectually vibrant society now is that we are increasingly paying the cost of living in an intellectually impoverished society. It is so bad that Mashal Khan was lynched on a campus by his fellow students. Besides, we have also lived the Malala phenomenon.

I did have some time to step into a few bookshops and libraries and was impressed by the level of scholarship and enlightenment in a developing country with a language that is restricted to Portugal and its former colonies. Brazil is a large country of a continental size. It is the fifth most populous country, until we, now sixth, are able to overtake it.

Incidentally, I was first made aware of the power and stature of Portuguese language in a very unlikely and exotic situation. We were in Tajikistan in 1998 and Ana, a print journalist from Lisbon, was also a member of the media team covering Prince Karim Aga Khan’s visit to the country. We had an opportunity to talk about our respective countries’ literature and arts. Ana spoke about Jose Saramago with such passion that I had to apologise for not knowing the writer. Later that year, Saramago was awarded the Nobel Prize in Literature.

So, when I tell my stories about Brazil and what I found different there, the pavement bookstalls present the other side of street crime, mainly in Rio. Be careful, is what everyone advised. Fortunately, I felt safe while walking on the main boulevards -- and glancing at books with titles that seemed familiar.

Though Portuguese is the majority language with a slight margin, South America has produced some great writers in the Spanish language. Let me conclude with my favourite Jorge Luis Borges quotation: "I have imagined that paradise will be a kind of library".

Hamlet on a pavement