Down and up the slope in merciless cold

To Trysil, a ski resort in Norway about two and a half hours’ drive from the capital Oslo, for late season skiing 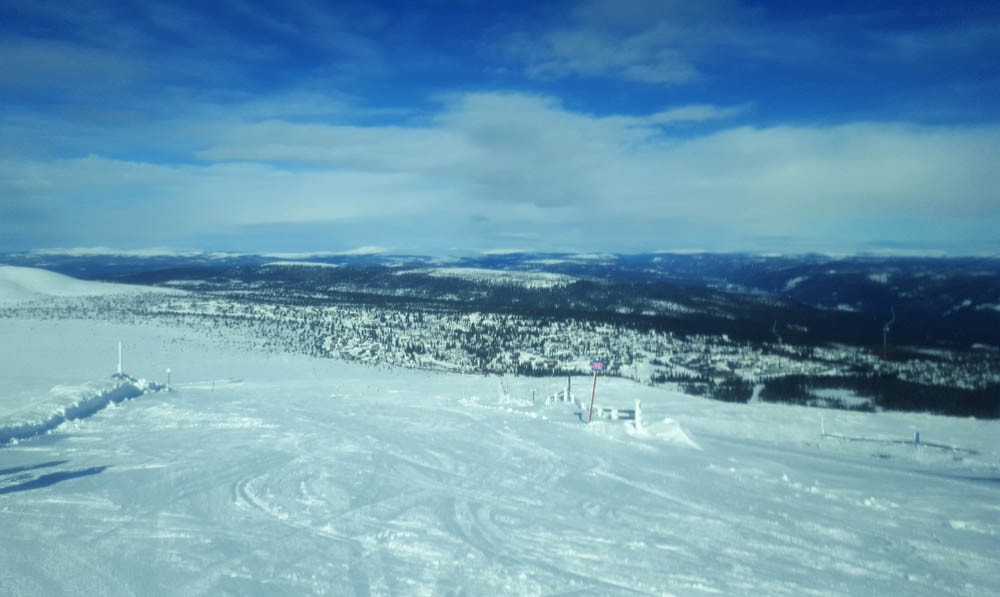 Trysil is a lovely ski resort with round volcano-shaped mountains that have dense forestation down below. People are friendly, everyone seems to speak English, vegetarian food choices are available, it does not get crowded, and the environment is stress free. You could leave your skis anywhere and be sure that they will be there even if you come the next day.

I was touched to see how a group of disabled people were brought over to Trysil to share the joy of skiing. It took hours of work to get them all strapped up in specially designed buggies, and then ski instructors took them up and down the slope, as caring as a mom is when she takes her infant out in a push chair.

Trysil is great for late season skiing because ‘it is in Norway’, where winter is the default weather. It gently sways from less-cold to more-cold, without getting to summer or even spring as we know spring in Punjab.

This was my first visit to Norway and I discovered the severity of its cold weather the hard way. The first morning I woke up, from the window of my room, I saw the reading on the digital display board at a ski lift station: minus five with winds of 7 miles per hour. That sent a chill down my spine. Little did I know that this chill was going to stay all through the week!

Trysil has a full variety of slopes, from easy to hard: nursery, green, blue, red, and black. But it is probably best for intermediate skiers, who enjoy red and can manage black and like to ski with family. The apres-ski scene (or after-ski party scene) is dull. It’s a quiet area with a small population; it does not even have a McDonald’s leave alone pubs and clubs often found around ski resorts.

I had a good first day of skiing alone in which I checked out a number of slopes. Later, to socialise and improve my technique, I enrolled into a group lesson with the local ski school. There were six of us, mostly Swedes and Danes, who had driven over during school holidays. It was a short lesson, just an hour and half every morning. But it turned out to be a memorable one. That’s because our ski instructor, I will call him ‘P,’ was more of a philosopher than a ski instructor. Many see skiing as an active sport, but for P it was an intellectual endeavour.

At the risk of being naively optimistic, let me say there is a chance that the skiing scene in Pakistan could change due to a four letter phenomenon: CPEC

There we were, standing still in a line on top of a slope in minus five degrees Celsius weather with strong winds blowing in our faces. It was mercilessly cold. My instinct was to race down hill as fast as I could to escape the torture. But P was as relaxed as one would be at a dinner table. He slowly talked in Danish and then in English, looked for feedback, and talked some more. Even the Swedes and Danes felt the cold. I had to rely on my poker face while I froze from head to toe, worrying if I had brought enough Panadols to survive these lessons. The last time I felt this cold was at the K-2 base camp when I had to spend the night in a wet sleeping bag. (I did end up finishing two leaves of Panadols).

P was as sweet and polite as they come but his approach to teaching skiing was unusual.

To make matters worse, there is an unusually large number of button lifts and T-bars compared to chair lifts. A big difference among them is that while the button lift and T bar slowly drag you along on your skis exposing you to the cold, a chair lift with its plastic lid down gives you a good rest and saves you from the cold wind while it whisks you to the top. Not only are there a few chair lifts, surprisingly, some of them did not even have a front lid. They take you on a ride, say 20 feet up in the air, fully exposing you to the strong cold winds. To me, that’s more like learning winter survival than skiing.

If the cold and the wind do not get you at Trysil, the low visibility does. During the day, the sun is barely as bright as a street light in Islamabad at night. As soon as the poor sun tried to brighten things up, dark clouds engulfed the horizon. Then it was white all around, and the lack of contrast made it harder to see. Snow goggles are a help but they also do only so much. Fortunately, we did get a few hours of bright sun, which filled our hearts with happiness, as we enjoyed doing speedy turns down the slopes.

When I told my friends at work about my plan to go skiing abroad, they asked me why I wouldn’t go skiing in Pakistan. There surely is skiing in some places in Pakistan, such as Nathiagali, Malam Jabba, Shogran, and Ratto. However, having been to each of these, I discovered through hard knocks that skiing takes way more infrastructure than Pakistan can afford or manage.

To begin with, there are only one or at most two very small slopes at the resort. If the electricity outage does not shut out the ski lift, the snow machine that is supposed to prepare the slope is out of order. If somehow both are working, the machine operator would probably not have returned from leave as yet. If he is present and willing to work, the place you are staying at would have some kind of a breakdown with no heater or hot water. If everything is somehow operational for a while, that surely means there is a VIP visiting and all ordinary mortals must give way to the chosen one. So many years have passed by but this culture has not changed in Pakistan.

Sitting at the Oslo airport, on my way back to Islamabad, I recalled my first experience of skiing many years ago. It was a three-day ski course organised by Adventure Foundation Pakistan in the small public park next to the local Churchin Nathiagali. There is no ski lift there. We called it ‘khudda’ (or ditch) because it looks like one. You got yourself in a snow plough stance in one corner, moved a few metres, had a fall, got back up, and side-stepped to your starting point again. It took so much energy going back up with the skis on it was more of a ski workout than a ski lesson. The infrastructure was nonexistent, but the instruction was first rate. Jan Nadir and his protégés Rafi and Khalid from Adventure Foundation were as good ski instructors as I have met in Austria or Switzerland. To their credit, they defied all odds and showed many like me the joyful skill of skiing.

At the risk of being naively optimistic, let me say there is a chance that the skiing scene in Pakistan could change dramatically due to a four letter phenomenon: CPEC or China Pakistan Economic Corridor if you have been living under a rock. Having hiked the Mintaka Pass area on Pak-China border, I can say that there are plenty of extraordinary places to develop world-class ski slopes. I once skied just a few miles away from Beijing and was shocked to find out that the Chinese had created that whole ski area with artificial snow. For them, to create a ski resort near the Karakorum Highway is no big deal. Imagine, a short morning flight from Islamabad to Gilgit, followed by a coach ride to a ski resort, you could be on the slope by the afternoon, as if you had left London for a slope in Austria. Pardon the cliché, but wouldn’t that be a "game changer"?

Till that happens, the world has lots of ski resorts if you can afford to travel to them and love skiing. Trysil is a good one too, just be prepared to brave the cold.

Down and up the slope in merciless cold