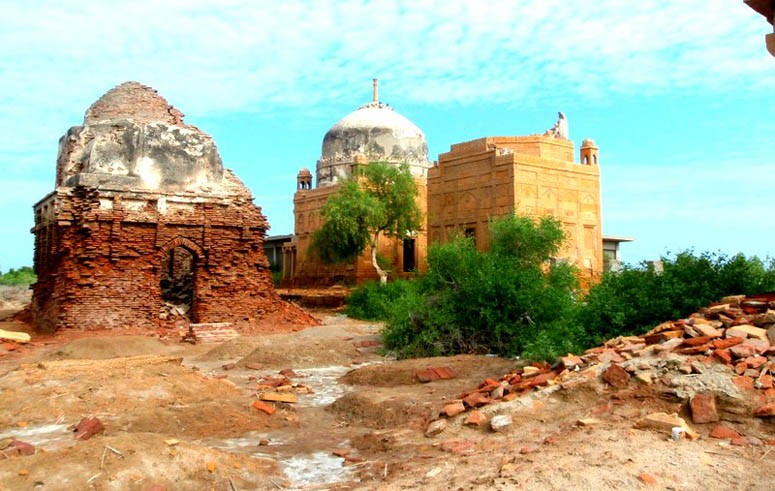 I was reading an old, worn-out copy of Kulliyat-e-Iqbal when I stopped at this poignant verse in the famous poem Masjid-e-Qurtaba, the grand mosque of Cordova.

It brought to my mind the memories of an old but very beautiful necropolis in Sindh that I visited some time ago. It often happens that some of the most beautiful monuments are often forgotten by people due to inaccessibility and negligence and these structures therefore lie in sheer oblivion. The story of the royal necropolis of Talpur family of Sindh, situated at Chitori near Mirpurkhas, is somewhat similar.

Taking advantage of summer holidays, I went there in mid-June 2015, accompanied by my siblings, and carrying a shopping bag full of sandwiches. Fortunately, the weather was very pleasant, the sky was partially covered with clouds, and a cool breeze brought the temperature to a tolerable level. This cemetery is located on the road leading from Mirpurkhas to taluka Sindhri (yes, the same Sindhri that is famous for its delicious mangoes).

After travelling for half an hour, we saw a rustic signboard bearing the name of the graveyard.

The scene ahead of us was really amazing and revived our spirits. There were large canopied and domed structures embellished with intricately carved stone slabs. The tall and majestic tombs adorned with the yellowish colour of sandstone and of red brick masonry juxtaposed with teal created such an ambience that was at once peaceful as well as spiritual.

The Talpur dynasty defeated Kalhoras, and ruled Sindh from 1783-1843. During their reign, they built a number of architectural monuments -- the tombs of their deceased relatives are foremost among them.

The Talpur dynasty defeated Kalhoras, and ruled Sindh from 1783-1843. During their reign, they built a number of architectural monuments -- the tombs of their deceased relatives are foremost among them. Three of such tomb complexes are situated in Hyderabad, new Khudabad (near Hala) and Chitori, near Mirpurkhas. In fact, Mirpurkhas city was founded by Mir Ali Murad Talpur, and one branch of the family known as Manikani Talpurs settled here. The royal cemetery at Chitori served as the burial site of rulers and their immediate relatives.

The notables of Talpur family who are buried here include Mir Sher Muhamad Khan, also called the ‘lion of Sindh’ (who led Talpur army against the British in the battle of Dubbo in 1843), Mir Allah Yar Khan (founder of Tando Allah Yar city) and Mir Tharo Khan, among others.

The graves are covered by canopies, stone pavilions, and ribbed domes. The unique feature of these mausoleums is the usage of dressed stone panels and slabs, which are carved in a number of different floral and geometric designs that render these tombs extremely beautiful and a feast to the eyes of connoisseurs. The graves also bear inscriptions in Persian providing details about the date of death and name of dignitaries buried there. The craftsmanship, dexterity and skill of the stonemasons of Talpur period is worthy of a lot of praise as they were the ones who transformed solid blocks of stones into pieces of delicate and intricate art.

The tomb of Mir Baqar and Mir Mirza Khan is the most beautiful and well-preserved structure. The lower walls are made of sandstone and are decorated with floral panels and calligraphy.

Apart from the old tombs, there are also a number of new graves because this necropolis is still used by Talpur family as well as by the local people of surrounding areas. These graves are also very elegantly decorated with white marble, and some are adorned with floral patterns.

Unfortunately due the neglect of people, indifference of concerned authorities and weather, this once magnificent cemetery is now lying in ruins. The torrential rains of 2010 and 2011 wreaked havoc on these monuments. Most of the domes have collapsed, the roofs have caved in, walls have broken, and supporting pillars are rapidly falling. The entire surface of the cemetery is covered with rubble, broken stone and glazed panels.

This graveyard is a very important piece of Talpur architecture and a monument of immense historical importance. It is situated on a link road and can be easily accessed from Mirpurkhas city, so if the state authorities renovate and conserve the falling tombs, it will be very beneficial to the tourism of the area.

On our way back, I saw hordes of pigeons siting on these tombs and I thought that maybe pigeons are fonder of historical monuments than humans are. Who knows!