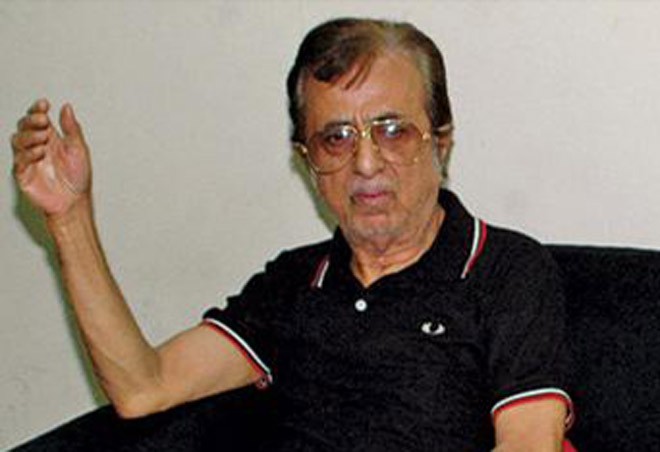 In the late seventies, I came across a Mehdi Hasan song, ‘Kabhi sochta hoon mein’ which was a total deviation from his usual stuff. It was at a time when I had resigned to the fact that the days of melody were over, as the giants of sub-continental music were either dead or spent forces. It was not difficult for me to track down the song which turned out to be from a Pakistani blockbuster film, Aain’ that had a score by Robin Ghosh. A sense of pride blossomed in me for I knew the composer was from Dhaka.

Robin Ghosh was the most talented and smartly-attired film composer I had ever met. Mostly in white outfits, he carried an air like no other music director of his time. He reminded me of Shankar-Jaikishan and O.P. Nayyar from India -- stylish and flamboyant. Only that he hardly talked; but again he exuded some kind of confidence because of the way he carried himself.

He had left Dhaka in 1968 for Karachi with his star wife, Shabnam, subsequently settling down in the ‘Hollywood of Pakistan’, Lahore. It is now history that Robin Ghosh by then had already given Dhaka the much-needed facelift as a film music centre. A colourful start with Ferdausi Begum (Rahman) as co-music director with Talat Mahmood’s greatest Bangla hit, ‘Tomarey legechhe eto je bhalo’ for Rajdhanir Bookay (1960) and then independently in Harano Din (1961), Notun Sur (1961) and many more. Mind you, it was the time when we were all hooked only to those Bangla songs across the border.

Then, he took audiences from Karachi to Lahore by storm with his Urdu compositions for Chanda (1962), which gave Ferdausi Rahman, Anjuman Ara and Farida Yasmeen their all-Pakistan image. The songs of Chanda and subsequently Talaash (1969) went viral all over Pakistan when music by Naushad, S.D. Burman, Shankar-Jaikishan, Madan Mohan, O.P. Nayyar, Salil Chowdhury and Roshan flowed in easily to the taste of local cine lovers. Not to forget, the maestro did that without Noor Jehan, Naseem Begum, Muneer Hussain or Saleem Raza … in other words, a 100 per cent Dhaka effort. ‘O pardesi aaja’, ‘Kuch apni kahiye’, ‘Jab tum akele hoge’, ‘Kabhi to tumko yaad aaye’, ‘Nadia behti jai behti jai’ are just some of his path-breaking compositions that he left behind when he was off to Karachi/Lahore.

Robin will also be remembered for being the only successful music director of his time who had not submitted to Noor Jehan’s ‘mood’; just as O.P. Nayyar had a career graph without Lata Mangeshkar.

The advent of Robin Ghosh was not sudden. As the story goes, Pahari Sanyal, the well-known character actor had predicted his and Moslehuddin’s rise in 1959 when the two were in Kolkata to record songs in the voice of Sandhya Mukherjee and Hemant Kumar for the Pakistani film Humsafar. A few years later, both Moslehuddin and Robin became accepted masters of film music in Pakistan. In Pakistan, Robin stood apart from his other Pakistani counterparts. Equipped with the Bengal folk and choir music that he had picked from his school St. Gregory’s, Dhaka, Robin brought in a new wave of music in films. With harmonious melody sweeping end to end and an orchestra that never suppressed the singer’s voice, Robin presented songs with a flair that gave a listener a dream-like effect. He gave Ahmad Rushdi ‘Ussey dekha ussey chahaa’, Mala ‘Wohi hum hain wohi tanhai’, Mujib Alam ‘Wo mere samne tasveer bane baithe hain’, Masood Rana ‘Jawab do na do’, Mehdi Hassan, ‘Pyaar bhare do sharmile nain’, Runa Laila ‘Hume khokar bahut pachtao gay’, Ghulam Abbas ‘Aise wo sharmaye’, Akhlaq Ahmad ‘Sona na chandi’, Nayyar Noor ‘Roothay ho tum tumko kaise manaoo’n piya’ and Mehnaz ‘Tujhe dil se laga loon’. The list being endless.

During his home trips to Dhaka, he would also leave his stamp to enrich the Bangla music domain with classy compositions in films like Peech Dhala Poth and Nacher Putul. The songs had just that ‘melody pull’ to make them easy on the ears and lips alike. Robin Ghosh excelled in soft romantic songs and these went on even at a time when noise was preferred to notes. It is therefore of little wonder that successful Indian composers like Anu Malik, Nadeem-Shravan, and even Laxmikant-Pyarelal have all used Robin’s tunes in their music.

Although he was a big fan of Naushad Ali, his works had occasional influences of O.P. Nayyar, Salil Chowdhury and the Burmans. No big deal, as which composer (or artiste) was not influenced once in a while by the greats of music or their talented colleagues? But what ailed this composer from 1981 onwards? Thirty plus years, he did not compose even 10 songs! Was it lack of confidence?

True, the Pakistan film industry was in shambles due to President Ziaul Haq’s policy which became a deterrent to all creative artistes but Robin was also asked to compose for non-film songs both in Bangla and Urdu during Zia’s period and after. Sadly, he showed no interest. Insiders say he believed that composing non-film tunes was demeaning for a film composer while this writer observed that Robin’s film compositions had become typed and monotonous and he wisely chose to step out of filmdom.

His post-retirement years were spent in the company of close friends in Dhaka watching Hollywood classics and cricket! But for most, including the writer, his greatest achievement will remain the melodious mantle in which he presented Ferdausi Begum and Abdul Jabbar (Bangladesh), Mehdi Hassan, Nayyar Noor, Mehnaz, and not to forget -- Akhlaq Ahmed; all of whose voices instinctively came to be identified with his baton. Robin will also be remembered for being the only successful music director of his time who had not submitted to Noor Jehan’s ‘mood’; just as O.P. Nayyar had a career graph without Lata Mangeshkar. Like Madan Mohan, he was born in Baghdad and like the great Indian maestro, his music was always, a departure from the path of his contemporaries. With seven Nigar awards out of the 35 films he composed music for, Robin Ghosh will always be remembered in the golden chapters of Bangla and Urdu film songs of ‘The Once Upon A Time Pakistan’.