The marhi of Swai Gir in Shahdadpur, a town in South Sindh with a Hindu population, represents heterodox traditions and practices still thriving in Pakistan 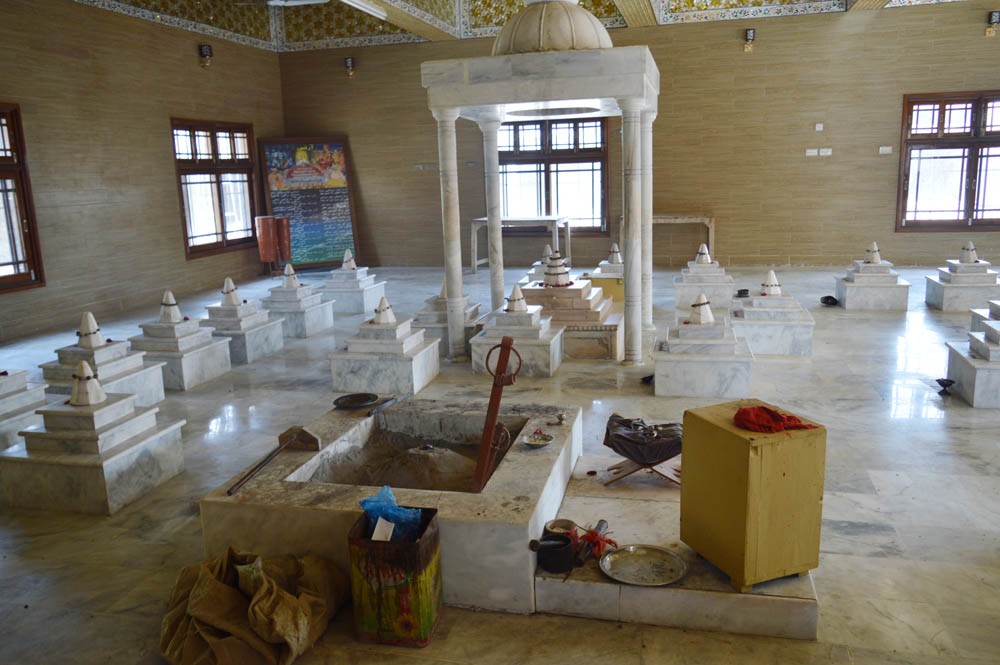 The glorious yogis in this world,
Some ‘Fire’ brings, some ‘Light’-
Who kindle themselves to ‘ignite?’
"I cannot live without them"

Shah Latif’s Sur Ramkali translated into English by Elsa Kazi is about jogis or yogis he accompanied for some time as they visited various pilgrimage sites across the subcontinent.

The various groups of these jogis and their establishments can still be found at some places in Sindh which is home to the largest Hindu minority in Pakistan. In medieval times, the province also hosted a thriving population of jogis or Shiavite renunciants also called Nath Jogis or Kanphata Jogis.

G.W. Briggs has documented them in detail in his classic book Gorakhnath and Kanphata Jogis (1938). Michel Boivin has also described the jogis in Sindh and their association with the cult of Shiva in one of his articles.

Shiva has a special association with Sindh. J.P. Gulraj says, "Shiva heard the prayer of my country and behold! His mercy changed the original plan inasmuch as He extended the course of the ‘river of the five waters’ so that it flowed into this desert as the river Sindhu."

I got the opportunity to explore various non-Muslim places of worship in Sindh while I was working with the Uderolal Research Project. It was at that time that I saw a marhi of Girs (a sub-group of jogis) in Shahdadpur. Anthropologist Zulfiqar Ali Kalhoro describes marhi as ‘the centre or a monastery of the Naths’.

So, this marhi was also something very interesting and unique.

Sindh is home to the largest Hindu minority in Pakistan. In medieval times, the province also hosted a thriving population of jogis or Shiavite renunciants also called Nath Jogis or Kanphata Jogis.

In October last year, we went to Shahdadpur, a town in South Sindh with some Hindu population to see a Jhulaylal mandir. Once we reached and saw the mandir, the caretaker asked, "Have you seen the marhi of Swai Gir?"

We looked at each other and unanimously replied that we hadn’t. The caretaker looked disappointed.

"Why not?" he asked. "It’s the most important site for Hindus and is a must-see for everyone."

Well, be it so. We decided to go and have a look at the famous marhi.

The building is tucked in a large enclosure and is also guarded. When we entered the courtyard, a group of men clad in saffron shirts and white dhotis was sitting on the floor. It was lunchtime; so a huge pot of boiled rice and another full of lentil soup was being served. When they saw us coming they also invited us to eat. The compound had an icon of Shiva with a serpent wound around his neck. The walls were adorned with photos of former caretakers and other Hindu deities.

Swami Mohan Gir, who is the current gaddi nashin of the marhi was sitting in the centre. He is a polite, soft spoken, middle-aged man. He told that Girs are ascetics who worship Shiva and live a strictly disciplined life. They do not marry, rather adopt disciples and transfer their knowledge to them. The last gaddi nashin adopted him as his successor and taught him many things related to their tradition. Gir establishments also have a dhuni (sacred fire). When a Gir dies, he is enshrined in a samadhi and is also worshipped by followers.

Swai Gir was the person who founded this establishment nearly 400 years ago. The marhi consists of several buildings and stands on land that is reportedly endowed by a wealthy landowner. It is a self-sufficient religious institution having agricultural lands, saw mills, cow sheds, residential complex, kitchens, a Shiva mandir and vehicles for transportation. It hosts thousands of Hindus at the time of annual Shivratri Mela.

The Shiv mandir is a small, beautiful building painted in a muted shade of pink, having a small dome and a shikhara (rising tower). It is surmounted by a small trishula, trident which is Shiva’s weapon. This temple has been renovated recently and also houses a Shiv ling (an abstract representation of Shiva) that is bathed with milk and adorned with flower garlands. Pooja (worship ritual) is held twice a day.

The marhi also has a large hall for samadhis of all Gir gaddi nashins who have died so far. I saw many young Hindu women with a red dot on the forehead touching the samadhis first and then their foreheads with the hand. Each samadhi is a small square platform that tapers upwards and is adorned with a Rudrakhsh (a rosary whose beads are made from a special tree, Elaeocarpus ganitrus which is also called Shiva’s teardrops).

The marhi of Swai Gir bears testimony to the heterodox traditions and practices that are still present and thriving in Pakistan. Far from the religious hatred, it espouses and reinforces the practice of peaceful coexistence, something that is badly needed in today’s Pakistan.