Tombs on the seafront 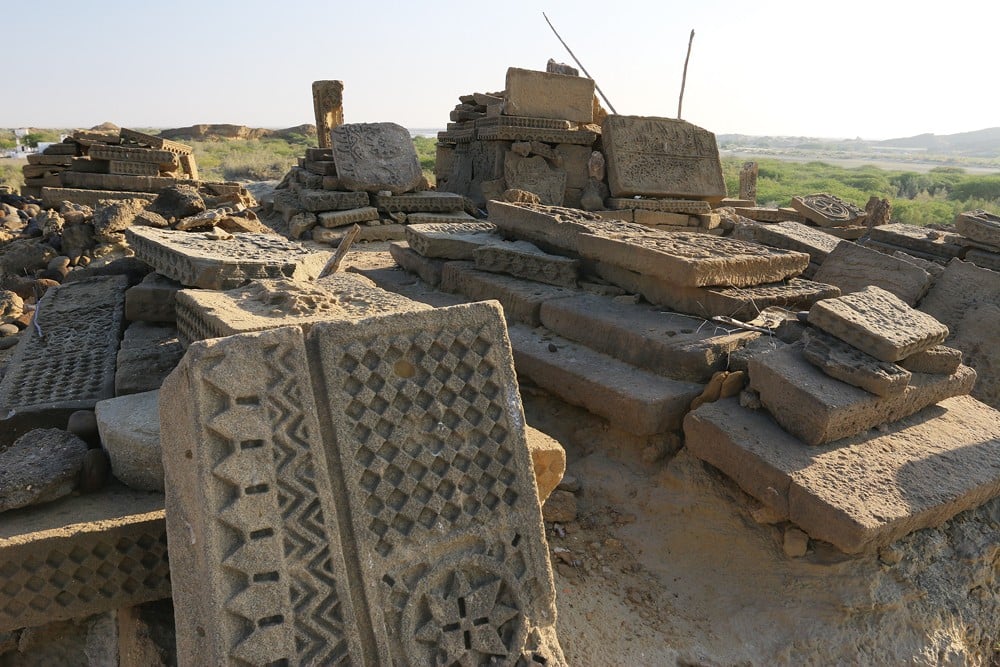 Pakistan is a country of suni-sunai history: someone mouths some silly banality prefixing it with a weighty-sounding, ‘In 315 BCE…’ and all within earshot gobble it up as gospel. No one bothers to counter-check. The result is that fools and charlatans have become our most respected historians and the plethora of worthless television channels has turned these wafflers into national icons.

End result: most people, even those supposedly educated, know no history. They only memorise tripe they think is history. For the past decade or so, I have written several times on the route Mohammad bin Qasim took into the subcontinent and the way he exited under arrest to be imprisoned in Iraq and die there in ignominy.

This was the same road Alexander had taken earlier on his way out of India. And two hundred years before the Macedonian, Cyrus the Great too trudged his weary way westward on this same ground. Looking further back into the distant misty past, we can yet see the thin cloud of dust raised by the retinue of the near mythical queen Semiramis of Mesopotamia.

This route is as follows: from Lasbela through Awaran to Hoshab and Turbat and thence onward through Mand into what is now Iran. In a straight line, this road sits on average one hundred kilometres due north of the seaboard. Despite the ardent wishes of the ignorant, the ancient road nowhere draws near the coast.

The two reliable histories, that is, The Chachnama and Futuh ul Buladan, of the invasion of Sindh by the Arabs, clearly spell out this route. We also know from Alexander’s historians as well as from post-Mohammad bin Qasim Arab geographers of the 9th and 10th centuries that the main and preferred route into Balochistan was as outlined above.

Worse than being shamefully unread at the collective level, we hold very firm and cockeyed views on history.

This current rant of mine is therefore about Mohammad bin Qasim’s entry and egress through Balochistan.

The Chachnama and Futuh ul Buladan clearly spell out the route: We also know from Alexander’s historians as well as from post-Mohammad bin Qasim Arab geographers of the 9th and 10th centuries the main and preferred route into Balochistan.

In October 2013, I travelled for the first time on the new Makran Coastal Highway from Karachi to Gwadar and further west to the Iranian frontier. At Aghor, a few hours out of Karachi, I was appalled to see a huge roadside signboard in cement concrete. The large English lettering on it screamed about the tombs of Mohmmad bin Qasim’s soldiers! On the upper right and left corners the parties guilty of spreading this darkness are named: Forest Department Balochistan and Hingol National Park respectively.

Just off the road, on a low mound, is a cluster of ruined elaborately-carved sandstone tombs. These are in the same style as the well-known Chaukandi graves just outside Karachi on N-5 and at a couple of dozen other sites around Sindh and Balochistan. Now because some of the tombstones are carved with Arabic letters, in their utter ignorance, the unworthies of the guilty departments could only presume they were the work of the Arabs.

Ignorance is not stupidity. But to persist in ignorance and refuse to learn from those who know certainly is. Such stupidity becomes a crime when one has the power to publicise it as the two departments do with their sign along a road that is now increasingly becoming a tourist highway. Those who put up this misleading sign could have at least made an effort to learn from a historian. That having been said, it is doubtful if a government historian could have enlightened the ignorant foresters.

When I first saw this criminally misleading sign, I resolved to return with a can of spray paint to disfigure it. My crime is, despite having gone back once more, that I did not. I now feel I am as guilty of propagating falsehood as those who put up the sign in the first place.

Now recently, an English-language paper in its weekly review of books has a front page image of this same sign. The caption below reads, ‘The location of [Mohammad bin Qasim’s] own grave is disputed, but some of his soldiers are buried at Hingol, Balochistan.’ If a tourist travelling along this highway had doubted the information on the sign, readers of this newspaper are now consigned to a life of ignorance.

But if you think this is bad enough, consider what we have on the top of the Ormara hammerhead. On the road leading to the naval mess, there is something like an old-fashioned milestone. The side you see as you face west has a rendition of Alexander to show that he went this way. The other side has Mohammad bin Qasim. The navy firmly believes that a very poor, barely traversable coastal road was the main highway through the region.

On my 2013 visit to Ormara, a naval officer asked me to write them a short note on the Greek general he called Ormur. In his pronunciation, the letter r in both syllables was palatal -- a sound that does not exist in Greek! It turned out that the navy was on the verge of raising a statue of this ‘famous general from Alexander’s army’ after whom Ormara was named!

I asked him where he had got the name of this famous general and he said it was common knowledge in Ormara. I cannot expect some poor semi-literate Ormara romantic to be literate in history, but I would like to believe that a commissioned officer of the navy would at least read up before going ahead to commemorate General Ormur.

My frantic vociferation fortunately paid off, and when I returned in January 2014 the statue had not been erected. It stood scrapped, so I was told. However, three years is a long time for General Ormur Ali Khan Naqshbandi (or whatever they want to call him) to be reincarnated. I wonder if on some crossing in the naval base he is already riding his dray horse, sword arm flashing with a raised Arab or Mughal style scimitar, Hun helmet covering his shorn pate with a cascade of long, dark Taliban hair below.

Or he could be shown with a nicely trimmed beard and turban holding aloft a banner with the crescent of Islam. If Alexander can be posthumously converted to the one and only true religion (as indeed I have been told on two different occasions), surely Ormur is also a worthy candidate for his soul to be saved.

Tombs on the seafront