So close to Musa ka Musalla 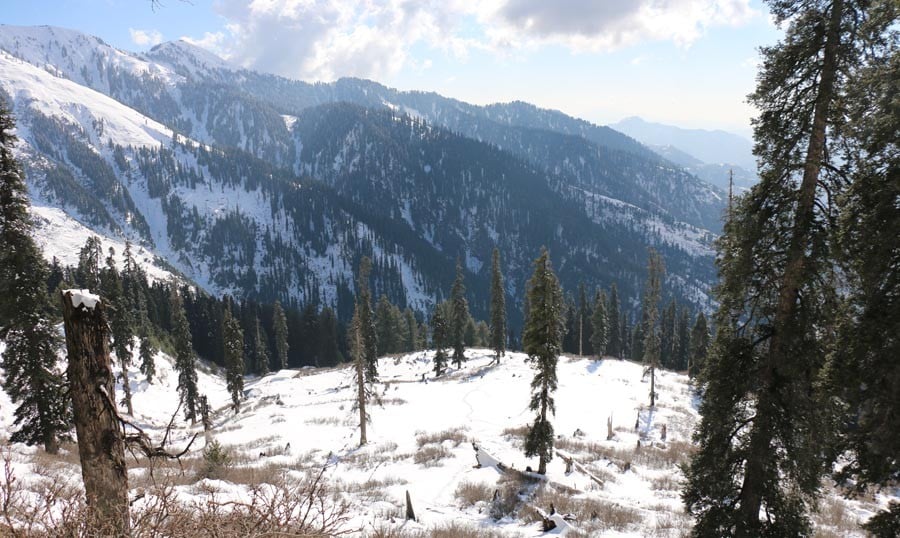 One night, in the middle of February this year, as I was sitting in my cosy room, reading a book in front of the heater, I got a call from my friend Taimur Khan who lives in Karachi. He got to the point straightaway -- he wanted to go somewhere where it was cold.

"Come to Islamabad," I suggested.

"No, somewhere cooler," he said.

I put my book down, thought for a moment, and said, "Let’s go climb Musa ka Musalla."

"It’s in Mansehra district, straddling the mountains between Siran and Kaghan Valleys." I explained.

After he hung up, I called our other partner in crime, Ahsan Haider in Lahore who like a good sport also agreed to this impulsive plan. So the ‘Expedition Get Cold at Musa ka Musalla’ took shape.

A few days later, we were hurtling down the Karakoram Highway, on our way to Munda Gucha, the last village at the far end of Siran valley from where we planned to explore the western side of Musa ka Musalla.

From the town of Shinkiari, we left the Karakoram Highway, veered towards the right and drove for another four hours through the fantastically scenic Siran valley before arriving into the sleepy alpine village of Munda Gucha where we surprised a few locals in the bazaar who weren’t expecting any tourists at this time of the year.

As we started walking again, Farman who was leading the way suddenly stopped dead in his tracks and started shouting frantically, "Look, look, over there… it is a bear."

The snow on top of Musa ka Musalla glistened in the late afternoon sun, as it towered majestically over the town of Munda Gucha, filling our hearts with a sense of awe and adventure. After wolfing down a late lunch at the local kebab shop, we checked into the one and only Munda Gucha Continental Hotel that was only a one room affair without a toilet.

At night we huddled around a log fire where an old wizened cook with a long flowing beard prepared our dinner.

When we posed the question about the name of Musa ka Musalla to the cook, he feigned shock and surprise. "You don’t know about the good Shepherd Musa? He was a pious man from our village who prayed regularly at the shrine close to the summit of the mountain. When he died, the mountain was named after him."

It was a bland story that prompted us to quickly eat our dinner and retire for the night.

Early in the morning, we hired the services of the hotel owner Naveed and his friend Farman to serve as our porters-cum-guides.

The expedition did not get off to an auspicious start as it started to rain as soon we had left the village and hit the trail that led to the base of the mountain. It was a long and wet trudge along River Siran that gushed out from somewhere high on the mountain. Musa ka Musalla was draped in clouds and it didn’t seem the rain was going to let up.

After a few hours we finally bid farewell to the river and started up the wooded slopes of the mountains. The climb steepened and the snow got deeper as we climbed higher through the enchanting forest of pine and deodar. At some point as we stopped to eat a cold lunch at one of the exposed shoulders of the mountain, I had the time to look around and soak up the magical beauty of the place. It was quiet all around, the rain had stopped falling and the grey clouds were swimming through the pine forest giving it a mysterious and eerie look.

As we started walking again, Farman who was leading the way suddenly stopped dead in his tracks and started shouting frantically, "Look, look, over there… it is a bear."

I was right behind him and instantly looked up to where he was pointing. I think I caught a fleeting glimpse of a dark shape that bounced off the slope above us and disappeared behind some trees. Others were not that lucky as they were a little behind us, and missed the whole action.

We all stood around for a while scanning the slopes above us but the bear was gone. Had it even been a bear? I was unsure.

The rain started again as we ascended the mountain and reached a few abandoned shepherd huts where we planned to spend the night. Despite having the appropriate gear for the weather, we were drenched to our bones, and shivering.

It had almost gotten dark when the huts came into view and we hurriedly ploughed through the deep snow towards the welcoming shelters. Luckily, the hut we chose had a fireplace and the mud floor was strewn with hay. Naveed and Farman quickly salvaged some dry wood from the adjoining huts and soon we had a roaring fire.

Eight hours of strenuous trekking through deep snow had taken its toll. We were exhausted, wet and cold. The winds and the rain were still lashing outside as we stood around the fire warming our limbs, drying our clothes, and looking forward to food and warm sleeping bags.

The next day dawned clear and sunny. At breakfast, we decided that Ahsan and I would push on towards the summit while Taimur, Naveed and Farman would stay back. Taimur had decided to stay because his climbing boots were giving him trouble and it was still a long way up to the summit.

Ahsan and I started the climb -- in high spirits yet weighed down by heavy backpacks and a worrying piece of news broken to us by Naveed about a nasty gang of absconding outlaws possibly hiding in some shepherd huts on our path just below the tree line. With a straight face, he took out a loaded handgun from the inner folds of his jacket and gave it to me.

"Keep this. You might need it," he said. I took the gun quietly and shoved it in my backpack.

Ahsan and I took turns breaking the snow trail as we had only one pair of snow shoes with us. We climbed up the wooded slopes slowly, advancing towards the tree line that separated the upper slopes of the mountains from the wooded slopes below. After a few hours, the dreaded shepherd huts came into view.

We stopped and scanned the huts for any human activity. There was none. We proceeded carefully with the loaded gun ready in my hand. Ahsan stopped below the huts while I looked inside the three huts one by one. Sure enough there were signs of human activity and it seemed someone had recently been here.

After leaving the huts, we continued climbing and soon cleared the tree line. Now, we were climbing steep slopes with very deep snow. We could clearly see the summit that looked within reach but we knew it required another full day of climbing. After an hour’s climb, we hit chest-deep in the soft snow and it required a herculean effort to move even a few feet in it. We stopped to take stock of the situation. There was way too much snow on the slopes leading to the summit and no chance of us making to the top in merely two days.

With heavy hearts, we climbed down to a wide ledge in the snow to eat a quick lunch and slogged down the mountain knowing in our hearts that we would return to finish the climb one day.

So close to Musa ka Musalla