A doctor for all of us 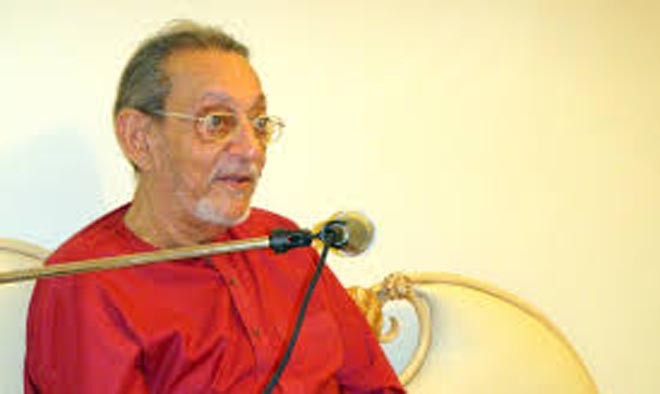 For some years, eminent art critic, Dr Akbar Naqvi who departed on November 21, 2016, had been suffering from a dreadful disease; but like everyone else around, one always had the faith that he would survive and continue looking at visual arts to write his incredibly impressive texts.

He was always keen about art works and the world around him and to convert the two into words. Although he hailed from an older generation (he was a contemporary of Ali Imam and Shahid Sajjad), he was always prepared to meet new artists, talk to them, and write on their works.

I remember him visiting my house in the early 1990s to see the work of a young painter who had just returned from the Royal College of Art, London, and was a ‘nobody’, trying to find his place in the tiny world of Pakistani art. Dr Naqvi was attentive to the canvases of a novice, and was gracious enough to devote a few pages to comment upon the work in his mammoth book, Image and Identity.

The book would be remembered even if we never hear Dr Naqvi’s unique voice again. Like a human encyclopedia, he combined links from local art to European art history, Western literature (Greek period to contemporary writings), Urdu and Persian poetry, all in order to contextualise what our artists were doing; in most cases without them being aware of it.

In that thick book, which most people have not read, he narrated the history of Pakistani art from cultural and literary perspectives. Thus one comes across discussions on Sadequain in the chapter ‘The Art of Malamat’, quoting examples and couplets of Urdu particularly of Ghalib to understand the painter’s frame of mind and his point of reference.

The connection of literature and pictorial art did not stop at the generation of Sadequain, a painter who wrote poetry as well. Naqvi provided literary links while talking about later generation of painters and sculptors like Lubna Agha, Tassadaq Suhail, Mussarat Mirza and Mehr Afroz. He also compiled a book of his collected essays on his friend and sculptor Shahid Sajjad which was published by the National College of Arts in collaboration with Ferozsons Lahore. Both in his impressive tome Image and Identity and his collected essays, Naqvi supported the works of his long time friend and passionate artist in an eloquent prose.

He was among a few select intellectuals who could mention the canons of European art history with as much ease as writings of Muhammad Hasan Askari and Intizar Husain.

But this treatment was not reserved for everyone. Dr. Naqvi was harsh to several others who, in his opinion, did not meet the merit of being good or great artists. For this he was disliked or misjudged by many as being too opinionated and biased. But apart from some factual details missing in his text, his book offers quite a comprehensive if not complete picture for understanding the art of Pakistan.

What distinguished Naqvi from other writers is his extensive and obsessive reading of art history and literature. For example, talking about the group of early modernist painters, generally known as the Lahore Art Circle, he reminds of Herbert Read stating: "The internationalism of modern art makes it difficult for the critic to claim a distinctive type of art from his own country".

He was among a few select intellectuals who could mention the canons of European art history with as much ease as writings of Muhammad Hasan Askari and Intizar Husain. This ability turned his text into that unique blend of resources that are essential to contextualise our art in its entirety. Reading his books, Image and Identity, Shahid Sajjad: Collected Essays, and Sadequain and the Culture of Enlightenment, one recognises his distinctive point of view.

This often posed a problem for him in the art circles. In a culture where criticism is considered as something negative, Naqvi’s authoritative and occasionally fierce expressions generated unpleasant responses. In spite of this, Naqvi kept writing what he believed in. What he believed in was not merely discarding someone’s output or encouraging a person’s effort but bringing a broader background and cultural context to understand their work.

Perhaps the most important aspect of Dr Akbar Naqvi’s writing was his voice. Actually every piece of writing invokes the voice of its author, even if it’s a text message on a mobile phone. But when we read Naqvi’s essays and books, we are reminded of his conviction and strong ideas. He was confident about what he thought, and penned it down clearly and forcefully -- sometimes fiercely. Due to this, he created enemies among artists. But it seems his ideas will survive and continue providing valuable backdrop to Pakistani art, from its earlier painters such as A. R. Chughtai, Allah Bux, Zubeida Agha and Shakir Ali to the latter generations, of Unver Shafi and Samina Mansuri.

In recent years, it was rumoured that he was working on an extended version of Image and Identity, including artists of younger age. One hopes the news is correct and a posthumous expanded edition would soon be published.

There are many who disagreed with Akbar Naqvi in his life, but no one could ever ignore his presence and point of view, often narrated in an exciting and original manner. One of his students of art history remembers that once, during his lecture on Cubism, Dr Naqvi dropped a terra cotta bowl on the floor to illustrate how Cubist painters destroyed form in order to analyse it. One missed that class as one would always be missing his words now.

It is obvious that Dr Naqvi deconstructed the body of Pakistani art in his attempt to infuse a new set of meaning, which was also more about him rather than his subject. But how one can distinguish or disengage him from the realm of Pakistani art? He is here beyond the threshold of death.

A doctor for all of us