DPC -- defence against what? 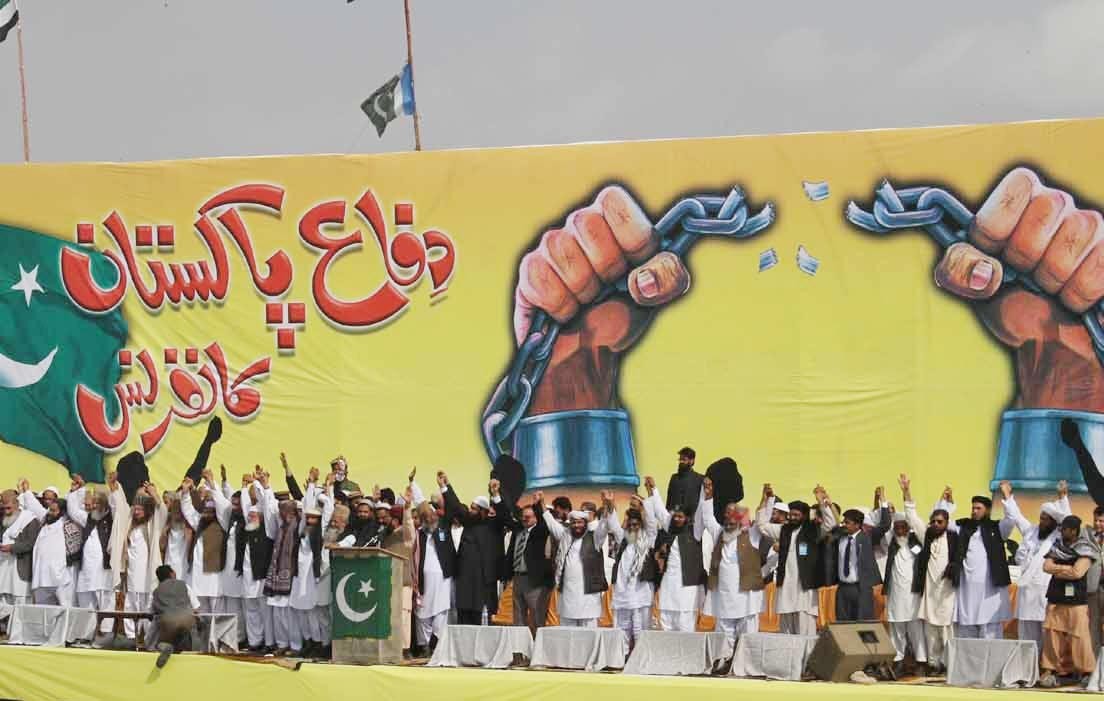 The new mantra that seems to be doing the rounds in Islamabad these days is Pakistan’s defence against all kinds of dangers. This is why forces of all hues have threatened to descend on the capital. Imran Khan, Tahirul Qadri, perhaps the Lal Masjid crew and Difa-e-Pakistan Council (DPC) are all on their heels to secure the country from the throes of ‘corruption’ and ‘injustice’.

The DPC threatens India against its occupation of the Kashmir valley and, in the process, aims to defend the country against any external threat. Although the DPC rally was supposed to be held on October 28, one wonders if they would like to prolong their stay and join hands with Imran Khan’s promised Nov 2 lockdown. The combined objective of both is to unhinge the government and make it fall to the ground.

While Imran Khan may have genuine political claims, eyebrows are bound to get raised at the announcement of the congregation of the DPC in Islamabad at this time of the year. The network of various jihadi organisations (DPC) was initially set up in 2012 after the killing of Pakistani troops at Salala. It was at that time that the Jamaat-ud-Dawa (JuD), Jamaat-i-Islami (JI) and even Harkat-ul-Mujahideen (HuM) came together to protest against the incident, and demanded NATO supplies to Afghanistan via Pakistan be stopped.

This jihadi moot in February 2012 in Karachi also showcased the leader of HuM, Fazlur Rehman Khalil, known for encouraging sectarian killing and fighting in Kashmir and Afghanistan. Subsequently, the group has organised a few rallies in other parts of the country on different occasions.

What appears to be common between 2012 and now is a suspicion shared by these militant organisations and the military establishment regarding the political government’s capacity and will to challenge the enemy. In 2012, both these above-mentioned players were unhappy with the then Pakistan People’s Party government against whom allegations were laid for conspiring with the US against its own armed forces -- expressed in the form of the infamous Memogate case.

Now there is an understanding that the Nawaz government is keener to mend ties with India and hence not playing the role it ought to in mustering international support for Kashmir against Indian atrocities. The passion with which the army would like to plead and fight for the Kashmir issue is different from how most political governments would tackle it. Only this time around the mood is even more intense.

The fundamental shift is Modi’s India, which means there is a blue-blooded right-wing regime in Delhi that has proven to be equally aggressive in dealing with Pakistan. With Narendra Modi in power, the 70 years of territorial battle over Kashmir has transformed into a full ideological showdown.

The fundamental shift is Modi’s India, which means there is a blue-blooded right-wing regime in Delhi that has proven to be equally aggressive in dealing with Pakistan. With Narendra Modi in power, the 70 years of territorial battle over Kashmir has transformed into a full ideological showdown. Pakistan Army’s history revolves around struggle for Kashmir for which it launched at least three wars: 1947, 1965 and 1999 (Kargil). The idea was always to militarily push back Indian forces from the Kashmir Valley that is considered a legitimate part of Pakistan rather than India.

A glance through Hein G. Kiessling’s latest book, Faith, Unity, Discipline: The ISI of Pakistan, indicates the history of how the intelligence agency along with Military Intelligence (MI) was dedicated to running a proxy war with the intention of tiring India into surrendering Kashmir.

However, it seems that things had changed after Pervez Musharraf took what appeared to be a U-turn from the historical policy on Kashmir. His formula may have resolved issues for the Kashmiri people but it was far more noticeable for its complete departure from the UN resolutions on the issue which are considered the cornerstone of Pakistan’s policy on Kashmir. One had even begun to imagine that the days of war between India and Pakistan were over. In fact, people had started to argue that the tension between the two neighbours would now be on Afghanistan rather than Kashmir.

But, in recent times, we seem to be shifting back to Kashmir, also because the Musharraf solution did not materialise. This is the only issue that draws unanimous support from the army and its other sympathisers.

What is also different now is the passion with which the army and its various partners seem willing to eliminate any internal disagreement on how to deal with Kashmir. There is clearly a growing resentment against the ‘liberal’ perspective on dealing with Kashmir and India. I was recently approached by a Kashmiri to argue how the liberals in Pakistan have let down Kashmiris, as if the handful of liberals ever had a role in national security decision-making. Interestingly, the present government is presented as representing the ‘unlikeable’ liberal voice.

Even for those who do not agree with such show of belligerence, it is very difficult to publicly stand up against the popular national narrative. Anyone arguing against the gathering would then run the risk of being termed ‘anti-national’.

On one level, people shouldn’t be surprised on this gathering because some of those participating have done rallies in the city before, such as the JuD which is considered as a certified proxy of the military. In a recent interview, on one of the tv channels, former Lt. General Amjad Shoaib even talked about the ISI’s plan to integrate JuD militants into the society through inducting them into police and para-military. Despite that, he claims the plan was not implemented by the political government. The thinking indicates a closeness and also the linkage between some militants and the military. The JuD, Jaish-e-Muhammad (JeM), HuM and some parts of the Sipah-e-Sahaba Pakistan were recently active in Kashmir and even Afghanistan.

The meeting in Islamabad, hence, is just an indication of how integral these militants are to our national security policy. No one has been able to draw the attention of the security establishment towards the fact that such images would isolate Pakistan more and people around the world and people will be tempted to look at the country as perpetrator of violence rather than a victim.

Surely, not everything can be shoved under the carpet of the changing relationship in the global great game.

Domestically, the signal is loud and clear. With DPC emerging as partner of the state, there is very little chance of returning to the utopian concept of some liberal state by Jinnah. There is too much at stake for the players to allow any transformation.

DPC -- defence against what?