A two-day trip to enjoy the beaches, hills and historic locations of one of Turkey’s most unforgettable cities 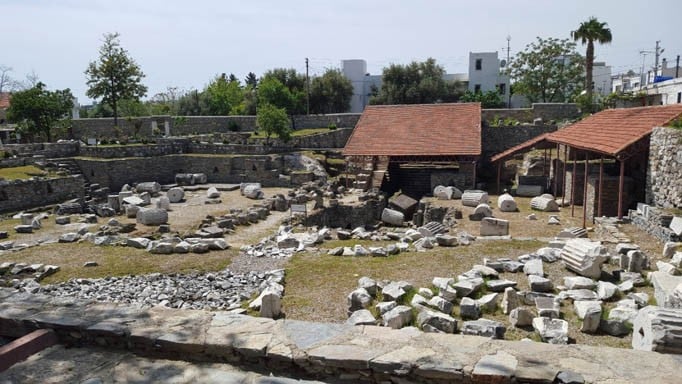 Turkey has been a popular tourist destination for many years but recently in particular, it has become one of the most travelled to country of Pakistanis. Not only have Pakistanis been more interested in learning about Turkish culture, history, food, but they are also visiting the country in great numbers.

The most popular Turkish cities frequented by Pakistani tourists include Istanbul, Cappadocia, Ankara, Antalya, Konya, Pamukkale, Izmir, Cesmel -- though the list goes on depending on the budget, the number of days available and the preference of the traveller.

If you are travelling between September and April, Bodrum should definitely be on your itinerary especially if you want to relax on a beach near the hills, walk along the roads surrounded by little white cottages, explore historical locations -- a part of the Seven Wonders of the Ancient World, and enjoy the delicious food.

I was fortunate to travel to Bodrum for two days with my family a few months ago. The city of Bodrum is located about 700km to the southwest of Istanbul on the Bodrum peninsula which stretches to the Aegean Sea. The city can be reached daily via any domestic Turkish airline, when travelling from Istanbul, in approximately one hour and thirty minutes.

We arrived in the city surrounded by hills. We set off towards the city centre (which takes approximately 30 minutes). Along the way, we saw the most beautiful bright-blue, which in some areas turned sea-green.

When we reached the city centre it felt like we were on a little island in Greece (Santorini to be exact).

One side of the city centre is lined with local shops, restaurants and boat rentals while on the other side, one can see boats ready to be rented and sailed. Accommodation is readily available everywhere in Bodrum but the ideal place to stay is on one of the hills that offer a splendid view of the city and Bodrum Castle as well as exclusive beach access. We were lucky that our hotel ticked all the ideal features on the list.

When we finally reached our hotel late in the afternoon and after checking in we strolled along the marina to get a feel of the city marked by white low-rise structures and a swarm of boats. It was after lunch but the outdoor restaurants and cafés were still overflowing with people of all ages leisurely chatting, drinking Turkish tea and playing the ancient game of backgammon.

Bodrum seemed to be a modest city where we had merely expected to relax and have a good time but little did we know that it would make a special place in our hearts.

In the evening we decided to go to a beach: Bodrum has many towns surrounding it with great beaches, so we headed for an evening at Camel Beach, located 15 kilometres from Bodrum city centre. There are a number of buses and taxis available at the city centre ready to take you for an excursion depending upon your budget and time.

Located between hills, Camel Beach was quiet: the waves were calm and we could literally see anchovies in the shallow water. When night fell, we headed back and tried the local cuisine which included mouthwatering cold starters, fresh cheese, and a delectable main course containing seafood and beef.

The next morning, after a quick breakfast at the hotel, we left early to unravel the city’s treasures. Our first stop was the Myndos Gate which includes the remains of a 4th century BC wall that was approximately seven kilometers long and contains graves of Alexander the Great’s soldiers. Our second stop was the Windmills of Bodrum, built in the 18th century and used till the 1970s. These massive structures, standing on the top of a hill offer a spectacular view of the town and the Aegean Sea.

Our third stop was the Bodrum Amphitheatre which was built in the 4th century BC. It isn’t a huge structure by any means but that it was built about 500 years before the Roman Colosseum and was amongst the initial structures to be followed for amphitheatre design highlights its significance. Initially, it had about 5,000 seats but the capacity was increased to 13,000 seats when gladiator contests started taking place. Today, the city holds concerts and events here especially during the summer.

Remember in school we studied the Seven Wonders of the Ancient World? Well, believe it or not, one of them is in Bodrum -- although not intact, yet its remains are in Bodrum. The Mausoleum at Halicarnassus (the tomb of Mausolus) is situated in Bodrum and was built in the 4th century B.C. It is said that the term mausoleum was coined after this tomb. It was destroyed in the 15th century due to an earthquake and the remains were used to build the Castle of Bodrum.

The original statues of Mausolus and Artemesia are displayed in the British Museum in London. This site is not too large and it is surrounded by the residential area of the city. We stayed for a short time but pondered over the longevity of the structure and how these materials have stood (well their remains to be precise) through time and destruction.

Shortly after, we headed towards the Bodrum Castle. This castle was built in the 15th century to withhold the attack from the Crusades. The stone and marble was taken from Mausolus’ Mausoleum. Currently, it also hosts the Museum of Underwater Archeology and is one of the world’s best in its field. It is a massive structure and takes 2-3 hours to walk around.

Our trip was short but very overwhelming -- a necessary break from our frantic days in Istanbul. Bodrum seemed to be a modest city where we had merely expected to relax and have a good time but little did we know that it would make a special place in our hearts, which is why I would recommend all those planning to take a vacation with their loved ones to have the unforgettable Bodrum on their list.