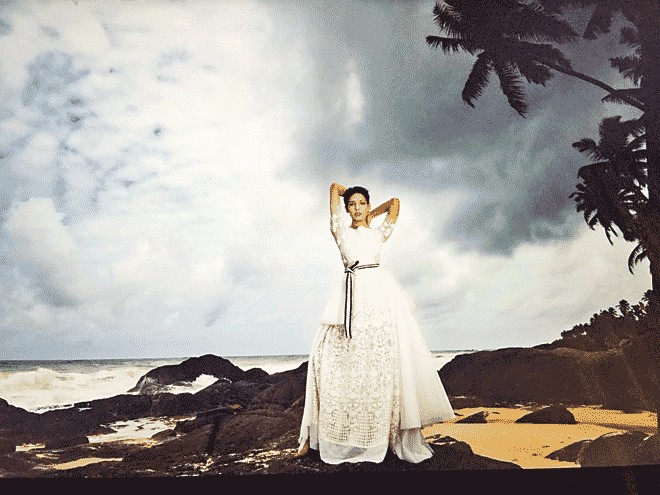 If a rule book on modelling was ever sent to Fayeza Ansari she probably read it, chucked it in the bin and chuckled. Rules don’t apply to Ansari the way they do to the rest of the girls in the modelling world. She is one of the few (are there any others at all who embrace honesty with such aplomb?) who are willing to tell all about a world closely guarded with implications of ostracisation for revealing an ugly underbelly. She was the first to confess to a debilitating drug addiction, the pressure to be waif thin and the pitfalls of working in a highly competitive industry.

Instep sits down with the model for an intimate chat where she talks about fashion weeks, the support from the fraternity and the new, young lot of models who are beginning to dominate the field.

Starting in a confessional tone Ansari states, "I just ran into a controversy last PFDC. I bumped into a very, very famous model and I’d like to publicly apologise to her. It was my fault totally. I shouldn’t have done it; it was way out of line. I rarely regret anything I do but this falls under those exceptional instances where I do feel remorseful for my actions. It was a huge runway and bumping into one model is just ridiculous. So yeah, I wish I hadn’t taken that line of action, literally and figuratively."

Continuing, the lanky, dusky model reveals, "I’m usually the model hanging out alone in the corner back-stage. I put up a show on the runway, not for social media or personal publicity purposes. I walk the walk but I don’t talk. I’m not a talker; my work and my ramp presence should speak for itself."

Ansari, recently returning to the runway after a hiatus, states that the fashion council in Lahore has always supported her, whether she was participating or not. "PFDC people are so nice to me; they really take care of me. I love working with them and they’ve been so supportive consistently. Back when I was struggling with drugs they tried to facilitate me in any and every possible way. I even got a call from Sehyr Saigol saying, ‘Beta, come on you’ve lost it. Pull yourself together, you can rise above this.’

I’ve always enjoyed such a great working relationship with them. Even when I shifted to Lahore I knew I could call them up when I was in a bind and they’d help. My payments were never late, in fact if I ever needed an advance or needed to be paid earlier than what had been agreed upon they would accommodate me. I absolutely love working for them," she states.

Talking about the new generation of models that are beginning their careers, Ansari is all praise. "With the rise of the internet age, there’s so much awareness. Every girl who’s coming in knows how to walk or at least has swag. Even if she doesn’t have the technicalities down pat, a little bit of tweaking and she’s good as gold. With access to all international fashion and shows and after observing the likes of say the Victoria’s Secret show or the Behati Prinsloos, the Gigi Hadids etc., these girls know what is expected from them. The internet has turned the world into a global village which has really made things accessible and made this self-education possible," she explains.

Among the newer lot, Ansari points out how strong Amna Ilyas, Amna Baber and Zara Abid come across. "I’m not going to compare Zara Abid to Iraj who’s seriously a super model and queen on the runway but she has the same spark and appeal in photographs. In terms of walk, Saba Sikander is one to watch out for; she’s going to be the next big thing, you can mark my words on this. She’s quiet, an introvert and shy so she just sits back and observes and learns from her environment when other are busy in trivialities. One day she’ll emerge from her chrysalis and a star will be born," Ansari says with conviction.

"The one thing that I do have a problem with is the show-starting and stopping business. It has the tendency to look very odd on the runway because you’ll have a solo model standing in the middle of the ramp, holding her position for ages without moving, while the girls shuffle around her. It’s almost like the model seems insistent on standing ground and one gets the sense that she’s so adamant to hold her position she’ll still be standing in the same spot long after the show is over and the lights have been turned off," Ansari claims with a dry laugh.

Continuing her train of thought, the model elaborates, "I don’t know why that happens and it looks stupid. The models need to follow the choreography that they’ve been instructed over and it’s usually the models themselves who change the position to claim centre spot and then refuse to budge. Bagging the opening or closing of a show is another cause for drama but that usually commences well before fashion week even begins, with models calling designers they’re close to, to ensure that the spot is theirs. Obviously, fights and cattiness ensue in such an environment."

Ansari is also of the opinion that it’s important to give back to the industry and states that she takes a personal interest in the girls that are just starting out, coaching them on their walk backstage or just checking in with them to make sure they’re not being bullied or needlessly targeted.

It’s qualities like these, her brutal honesty and undeniably her ability to work the camera that makes Ansari a coveted name within the fraternity, despite all the ups and downs she’s experienced. With bridal week approaching and Ansari back on the ramp, we’re eagerly awaiting to see her bring her A game to show and elevate the fashion presentation.