On the peak of Pir Chinasi

Thirty kilometres to the east of Muzaffarabad, vibrancy and tranquility coexist 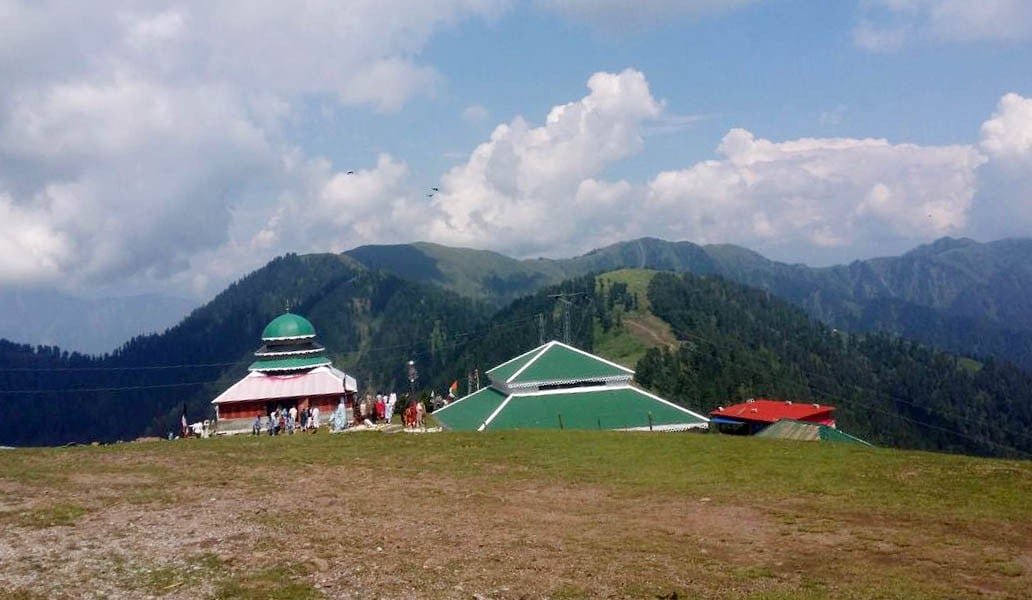 As we traversed the uneven, bumpy road to the mountain peak, all sorts of vehicles -- cars, pick-up vans and even motorcycles -- were plying upwards. At some point, the road became frighteningly narrow, with enough space for passage of only a single vehicle.

Seemingly, the pathway and the peak enthused both with currents of synergistic energy.

Vibrancy and tranquility coexisted on the peak of Pir Chinasi.

Located 30 kilometres east of Muzaffarabad, the peak’s major touristic attraction is the shrine of a saint, Hazrat Bokhari Shah. Unlike traditional dome-shaped tomb structures, Pir Chinasi’s turquoise tomb has three inverted circular discs, one spiralling out of another, and each succeeding disc, from the top, gets shorter in width and all rest majestically on a trapezoid.

To travellers from the plains of Punjab, accustomed to the sights of meandering rivers crisscrossing the flatlands, embracing the earth tightly as if synchronising with its rhythms and listening to its embedded secrets, towering mountains evoke a strange mystery.

Not that rivers, source of which lie in the glaciers, are without mystique. Bards of Punjab have penned myths and tales of Mirza Sahiban, Heer Ranjha and Sohni Mahinwal around riverbanks, especially Chenab which literally means Moon-water, as on full moon nights the sprawling, spinning river becomes a silver mermaid.

As poets found inspiration from rivers, many itinerant faqirs and dervishes meditated about spiritual matters at river crossings, and in the frequent bends of rivers, they saw a mirror-image for unpredictability of human life. As spiritual awareness of mendicants evolved, they became reservoirs of knowledge to transcend temporalities, of psychological powers to stay in a state of non-existence, and of compassion born out of inner struggles against life’s dilemmas. Interestingly, even etymologically, der (door) constitutes the root of both der-vish, a mendicant moving from door to door, and dargah, a threshold.

In different religious traditions as well as myth and folklore, mountains have been considered sacred: from Mount Olympus to Mount Kailash to Mount Sinai to Mount Hira. Either they are the abodes of gods or provide a portal for receiving divine revelation.

Not only did the holy men kept vigils besides river fords, many sought solitary refuge on mountain peaks. In different religious traditions as well as myth and folklore, mountains have been considered sacred: from Mount Olympus to  Mount Kailash to Mount Sinai to Mount Hira. Either they are the abodes of gods or provide a portal for receiving divine revelation.

Standing on Peak Chinasi, and looking at a tomb cupola jutting out into crispy white clouds, with glistening mountain peaks in the background, filled me with a spontaneous exuberance and serenity -- unlike what I have ever come across in the plains.

The shrine chamber was reverberating with gentle murmuring of prayers, some swirling out as echoes along with the fragrance of incense. The visitors were expressing their devotion in different ways -- a teenage girl was reciting Quran, a few older men were sitting quietly near the grave, while a young man was standing near a pillar with folded hands.

But women were denied admission to the burial chamber -- a phenomenon not unique to Pir Chinasi tomb. Whenever I have asked a caretaker about the reasons for this ‘ban’ on entry of women devotees, different reasons are proffered each time, ranging from menstrual impurity to the loud wailing of women to avoidance of co-mingling of genders besides the saint’s grave.

Luckily, my queries posed to the local guide about silsilah (spiritual chain) and karamaat (spiritual powers) of Pir Chinasi, even though he affirmed ignorance, were ultimately successful. He arranged a meeting with an elderly resident, an ex-serviceman, who had been coming to the shrine for past many decades.

"The Shrine was built in 1953. A shepherd used to bring his cattle at the peak for grazing and once, at the spot, where tomb had been constructed, his uptight buffaloes refused to budge an inch despite his cajoling and coaxing. A day passed, then a week and a month. Then, one night in a dream, a holy man instructed him to raise a shrine at the same place where his buffaloes sat still. Maybe, it’s the spot where the saint had meditated around four hundred centuries back. Since its construction, local influentials have acted as caretakers of shrine," narrated the retired havaldar.

On a mountain on the opposite side was another shrine. From a distance, trekkers appeared minuscule, like a platoon of ants on a hillock. Closing my eyes, I started listening  to the call of ravens, spinning ecstatically over the shrine. Perhaps, I was imagining the whirling dervish who, though grounded in devotional practices, uses them as a path, not for profit or gain, but to hear the ‘voice’ called sema in the sufic lore.

I am not sure. I can only make a guess about the profound mystery of dervishes.

On the peak of Pir Chinasi