Lal Shahbaz Qalandar’s dargah in Sindh that is replete with Hindu, Sufi and Sikh symbology and iconography 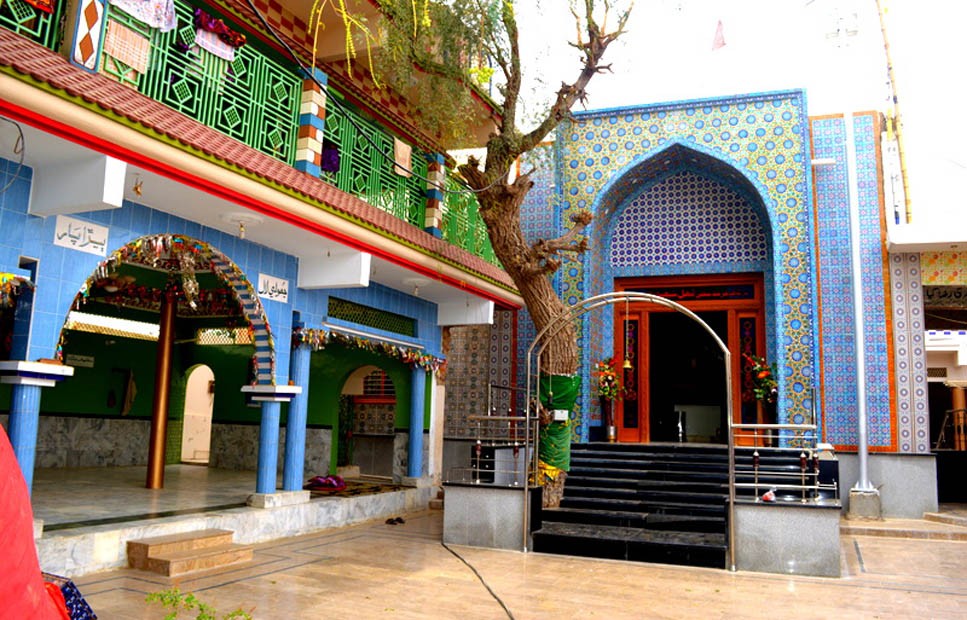 It is generally believed a dargah is a place where a Muslim saint (pir) or qalandar is buried, but it would be a bit surprising to hear of a Hindu dargah and it would be even more strange to know it is dedicated to a Muslim saint.

But, there is a place where such a dargah exists in all its glory.

Yes, there is such a dargah dedicated to the famous saint Lal Shahbaz Qalandar in a remote Kohistani town of Thano Ahmad Khan, almost 150 kilometres away from Karachi.

It was a cloudy day in the first week of April when we headed towards Thano Ahmad Khan in search of a sanctuary of river deity Udero Lal also called Jhulay Lal. We were working on a research project titled Udero Lal Research Project or URLP headed by renowned French anthropologist Dr Michel Boivin.

However, as we left the Super Highway and turned towards a link road, the countryside turned into small, desolate, rugged mountains and the road zigzagged through hillocks. There were only a few goats and even fewer humans that we encountered on the way. As we drove deeper into the mountains, we saw small temples and an ashram testifying to the presence of considerable Hindu population around.

Eventually, we reached Thano Bula Khan which is a neat but silent town, with the exception of its main market that is busy yet not chaotic like in other towns in Sindh. The roads were relatively clean and there were many shops and homes bearing the sacred Hindu symbol ‘Om’ on their facades.

Our destination still lay ahead, so we drove another 10 miles and reached Thano Ahmad Khan near mid-day. This town was also similar to the last one. We asked about the address of the temple and a young man guided us towards it. We were excited to have finally discovered the temple in that far off town.

However, what we saw there left us baffled; instead of Jhulay Lal mandir we saw a small replica of Lal Shahbaz Qalandar’s dargah that is originally located in Sehwan Sharif. While, we were still considering what to do, a man came outside and took us into the sanctuary.

What we saw there left us baffled; instead of Jhulay Lal mandir we saw a small replica of Lal Shahbaz Qalandar’s dargah that is originally located in Sehwan Sharif. While, we were still considering what to do, a man came outside and took us into the sanctuary.

Now the interior was the perfect example of Sindhi syncretism. The dargah was replete with Hindu, Sufi and Sikh symbology and iconography. In fact, speaking strictly, it could be a mandir, shrine or even Sikh darbar but interestingly it was none of these.

It was simply a dargah of Qalandar but one that was built by Hindus. So, they used mixed symbols containing posters, paintings, panaflexes and calligraphy, most conspicuously large images of Lal Shahbaz and his dargah at Sehwan. Adjacent to this dargah were residential quarters where people from all Kohistani areas would come and stay for urs celebrations.

The inner sanctum is very lavishly decorated with mosaic, and in the centre there is a beautiful wooden canopy where various relics related to the saint are kept. Besides, on every corner there are beautiful verses etched on mirror work in Urdu, Sindhi and Persian by such famous poets as Shah Abdul Latif, Allama Iqbal and Bhagat Kabir among others.

The caretaker of this dargah is a nice gentleman from Mithi and is deeply inspired by Sufi ideals of life. He specially pointed towards a verse ‘Tamanna dard-e-dil ki ho tou khidmat kar faqeeron ki’ reading it aloud which means ‘the cure of matters of heart can only be found in the service of saints or dervishes, this spiritual treasure would not be found in wealth or material possessions’.

A local resident told that the partition of Indo-Pak and its aftermath was not felt very strongly in this mountainous region that is locally called Kohistan; partly owing to its distance and inaccessibility. The people living in this area are called ‘Jaablu’ derived from Jabal that means ‘mountain’. This area is very rich in terms of anthropology and archaeology and it is not very well-documented.

The syncretic and pluralistic concepts of Sindhi religion are a unique example of how various religions fuse together forming a kaleidoscope of tolerance and peaceful coexistence. This is what we need in this era of ethnic strife, communal violence and extremism that has greatly damaged our society.