From Lahore, with love

A look at some recent music releases that demand a listen or ten. 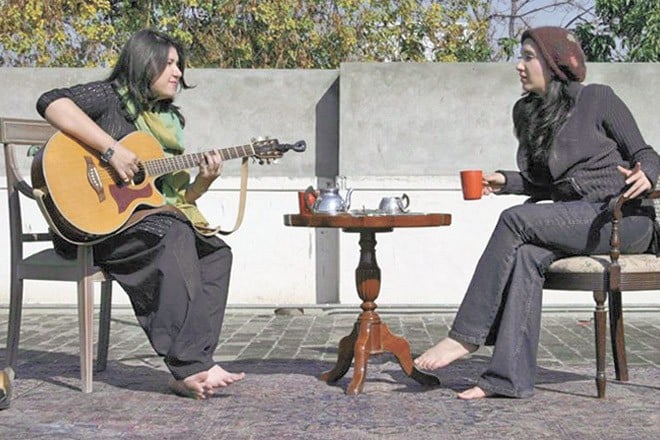 2016 is proving to be another brilliant year for music. While the debate over the viability of releasing a

full length studio album rages on in mainstream, there are plenty of songs that one can make do with in the meantime.

Though studio album releases have certainly slowed down, at least when it comes to a handful of prolific names like Atif Aslam, Ali Zafar, Ali Azmat and Strings, to pretend that the music scene lacks quality work is simply a case of ignorance.

With films releasing frequently now, sound tracks are becoming more and more exciting. Even television is gaining momentum with Mor Mahal leading the pack with three dozen songs featured on its soundtrack.

Our story, however, begins in Lahore, which faced a tragic attack in March when a devastating bomb blast ripped through a park on Easter Sunday claiming lives of over 70 people including several women and children. The incident shook the country and propelled music duo Zeb and Haniya to release a new track off their upcoming EP as a tribute to the cultural heartland of Pakistan.

Taking to their Facebook page, Zeb and Haniya noted that the song Dadra was "conceived as a lullaby to the nation and a video as an exploration of Lahore’s past, present and future. This is for both Lahore and Pakistan, for resilience amidst the darkest of times".

The music video, directed by Umar Riaz, lives up to Zeb and Haniya’s promise as it takes us through modern day Lahore, a night in ordinary traffic as the imagery is juxtaposed with images of Lahore’s glorious past including architectural monuments, quiet mornings and as the sky changes color again, you hold onto hope that it will get better.

The haunting minimal tones shift and Zeb’s voices echoes of hope as she sings about there being light tomorrow. Written by Zehrah Nigah and produced by Jamal Rahman at True Brew Records, the song works both as a metaphor that after a cloud of darkness and mist, light will emerge and  the sun will shine and as a love letter to a city that is enveloped in unspeakable grief after losing so many of its people.  The sound, slightly raw still retains a flavor of Zeb and Haniya’s folk quality but also goes beyond. It’s a beautiful tribute to a heartbreaking tragedy and reminds you just how effective and powerful music can be.

And though there is no word on a timeline for Zeb and Haniya’s EP, you can still hear them in their individual elements. While Zeb is featured on the soundtrack of Ho Mann Jahan and Katrina Kaif-starrer Fitoor and playing with world music unit Sandaara, Haniya Aslam’s magic can be heard on the score of the upcoming Mehreen Jabbar film, Dobara Phir Se.

Together they make up Tonight, Us, a band that started out with jam sessions in the studio several months ago and one that morphed into a musical unit that mixes "together elements of jazz, funk, soul, RnB and electronic music".

Their story is very curious. A couple of months ago, when Jamal Rahman was asked to curate a music event "designed to bring in artists Jimmy Khan, Zoe Vicajji and Sara Haider to perform onstage together", this band got together and "re-arranged two songs from each artist’s recent discography".

Experimenting with genres, rewriting the rhythm section and chord progressions essentially changed the entire vibe of the songs. Of the numbers presented at this event, the one that received the loudest applause was Jimmy Khan’s ‘Baarish’.

"Since it also happened to be a favourite among the members, we decided to take our version to the studio and use it to launch the band," explained Jamal Rahman in a statement. The result can now be seen and heard by everyone as Tonight, Us have released their song alongside a thumping music video and what an enticing musical adventure it truly is.

The band’s first single features Jimmy Khan but neither the video nor the song sound like a typical cover effort and is a complete reinvention, a fantastic reinterpretation of Khan’s original tune that featured on the Ho Mann Jahan OST.

The music video, directed by Saad Khan, captures this band in a studio and with the help of some innovative direction, makes it much more than an ordinary performance-based video. You can hear the electronic influence, that trippy synth driving the many layers the minute the song opens and as instruments come together and dissipate, you realize that both the song and the video, almost nineties-esque, makes you long for the days when music videos played on our television screens.

With plans of collaborating with more artists in the future as well as releasing original material, Tonight, Us has us very, very excited. Their adaptation should remind artists that if you’re going to cover a song, this is how you do it. The end.

From Lahore, with love