Shaan-e-Pakistan: To nurture or cease and desist?

It would be a pity if punctuality problems and overall mismanagement brought down this potentially relevant cultural platform. Instep investigates... 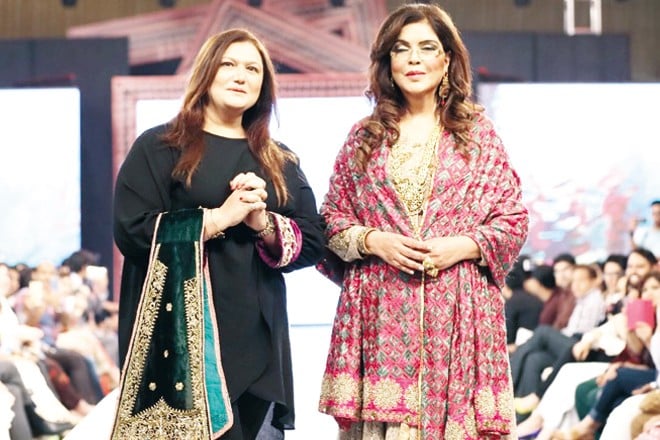 Given the state of relations with our neighbour, India, any collaboration between the two countries is welcomed with excitement and hope. Maybe it’s the sense of distance – despite being so close and sharing a mutual history and culture – that makes any platform working to lessen the divide very welcome. For an extravaganza like Shaan-e-Pakistan, it’s also a great shot at public relations in tumultuous times; security, hospitality, tolerance and moderation all on display for once, at home turf. The event makes claims of being successful in its aims: cultural exchange, entertainment and commerce all neatly wrapped up in three days. But was it all really as seamless as its social media depiction, vociferous PR and organizers claim?

As reported earlier, Shaan-e-Pakistan’s kick-off event, a musical and gastronomical night, suffered because of delays. There were murmurs of discontent from the crowd and participants for the lack of timeliness and while countless attendees walked out before the headline act, Rekha Bhardwaj even came on stage, the crowd that remained enjoyed her performance despite the late hour. Day two apparently didn’t fare much better.

Saad Ali, a young entrepreneur with a partnership in local brand 9lines spoke about the delay, disorganization and callousness he faced.

"It started off well enough with a very responsive and accommodating team. We paid Rs.75,000 for an entrance stall and were sent a layout of the exhibition space and our location but the ground reality turned out to be very different. It was only when the team flew to Lahore that we discovered that the team people we were liaising with were actually just a group of IBA student volunteers. On the day of the exhibition I arrived at the venue at 8 a.m. sharp, which was the time given to us for set up, only to find that no one from the actual management had arrived, and wouldn’t till noon. At noon the first member from the Shaan-e-Pakistan team arrived and started allotting floor space, which, let’s just say, wasn’t as promised," Ali stated. He also added that the decision to host an exhibition during work hours on weekdays severely affected footfall - the number of visitors promised by the organizers to the vendors fell well short of the mark. In fact, sources allege, the turn-out was so dismal that Beech Tree didn’t even show up for Day Three, despite having paid for their stall.

There are also claims of lack of provisions; vendors and models backstage spoke about no proper arrangement of food or water. "I bought nearly fifty bottles of water the first morning and had them handed out to the vendors and volunteers. In a place like Royal Palm, that’s far out from the city center with not many dining options, the management could have at least provided snacks or drinks but on Day Two there was no one from Shaan-e-Pakistan visible on the floor till Zeenat Aman came and tailing behind her was the entire entourage," added Ali. He summed up his experience as terrible, having been disgruntled by the lack of organization and disinterest in the welfare of participants.

Huma Nassr, the founding member of Shaan-e-Pakistan and owner of jewelry and apparel brand, Braahti, refutes Ali’s claims. "As far as we are concerned, the event went off without of a glitch. If you look at the size and scope of what we managed to pull off, from visas, security to hospitality, I think it’s commendable even if I say so myself. It isn’t easy to convince and then logistically manage to bring stars like Bhardwaj and Zeenat Aman to Pakistan. People complain that no big celebrities are will to come to our country but when someone brings them we want to point out the problems with the platform," Nassr stated, when talking about how the event matched her expectations.

"Yes there were definitely some punctuality problems, but everyone gets that. There are unaccountable delays and anyone who has worked in entertainment, fashion or music knows that so I don’t think they were a big deal. People sat around till 2 a.m. for Bhardwaj even though they all had to wake up early for work the next morning, but that’s how much they enjoyed the experience. On Day Three things did get delayed again but what do you do when you have to wait for personalities like Aman? You can’t rush them or start without them, plus everyone in Lahore witnessed the manic traffic on Day Three that caused the delays," she claimed, dismissing the punctuality concerns.

When asked about complaints from vendors and participants, Nassr was quick to shrug off any criticism from the models. "If there was drama backstage it was absolutely not our fault. Our models aren’t very professional and probably didn’t’ get along well with Prasad, the choreographer for the show we had invited from India. They didn’t understand his style of working and so if there’s anything they’ve said you can’t take it too seriously," she opined.

As far vendors at the exhibition are concerned, Nassr felt that they delivered on their promise, once again, punctuality not withstanding and stated that if a participant like Beech Tree backed out on Day Three, they couldn’t make everyone happy. "My sources actually told me that they had old stock and it wasn’t selling so they packed up and left mid-way. There’s nothing we can do about that," she explained.

Though we hadn’t heard of any spats behind the runway screens we called up models Anam Malik, Areeba Habib and Hira Shah for their views and overall experience. Malik and Habib had the same concerns: lack of food and water, mismanagement and a pool of models so green that they could barely walk.

"There were only five or six professional models that regularly walk the ramp," Malik revealed. "The rest were all new. They were so new that we couldn’t even recognize a single girl and that’s saying something since PSFW just ended and we worked with a lot of new faces. Also, the show got so delayed and it dragged on for so long that by the time the last showcase featuring Bibi Russell commenced, there was literally no one sitting, except maybe some people in the front row. Shaan-e-Pakistan actually squeezed a two day showcase into one."

Habib claims that she agreed to do the show because of Production 021, the team dealing backstage. "Those guys were great and really helped us out, even with things like outfit changes which isn’t part of their job. There were so many shows in one day that everyone was losing their mind and it was just complete chaos. If you’re trying to make a good impression on a country like India this is certainly not the way to go about it," she said, recounting her experience.

"I actually didn’t think it was that bad. Sure there were punctuality issues and some management glitches but look at what they managed to pull off! I thought it was a great ice-breaker and if we don’t support our local ventures, who will? If we’re constantly tearing them down instead of building them up and nurturing them till they iron out the kinks we’re never going to have any successful platforms," she said.

We can’t help but agree. Yes, Shaan-e-Pakistan isn’t worth all the hype right now, but right now is the pivotal phrase. It is a new platform with great prospective and we must support and nurture it till it reaches the point where people flock to it automatically, instead of being convinced of its merits. At the same time though, dismissing all vendor concerns or shrugging off punctuality are not exactly characteristics that benefit the platform, cement its reputation as professional or help it improve. Kudos to Nassr and her team for pulling off an event of this magnitude, it is not an easy job, but there are glaring problems  and unless they’re addressed with open-mindedness and wiliness to mend, Shaan-e-Pakistan will slowly fade into the B list background and never recognize its full potential.

Shaan-e-Pakistan: To nurture or cease and desist?