Chandni Chowk and around

Soaking in the ambience and charms of old Delhi 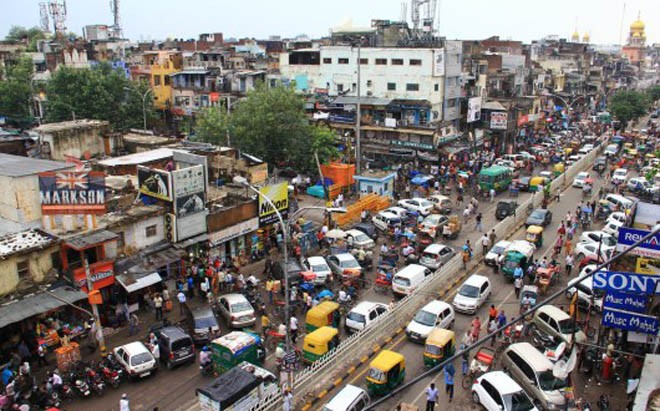 Returning from the Red Fort, closed after the Republic Day celebrations, my mind began weighing alternative sight-seeing options: Humayun’s Tomb, Chandni Chowk, and Jama Masjid. Let’s stop at the Chandni Chowk and soak in the ambience and charm of old Delhi, I decided.

As the car veered towards Dariba Kalyan, the towering shikharas of Lal Mandir rose in the sky, with the sun peeping meekly through layers and layers of dust. I had decided to visit Chandni Chowk without any pre-deterministic plan, which was not whimsical but only borne out of longing to roam in purana Dilli. My sentimentality for the place was not related to any personal association. Strangely human nostalgic memories have the power to move in a loop -- from the universal to personal, simultaneously retaining traces of scents, sounds and stories of unknown lands.

Ask shikharas and domes about their past, and they will narrate wistfully: Once at Chandni Chowk, the moon waxed and waned in paved canals, and once in the square Mughal imperial processions passed majestically after the coronations and victories in battles. And now, rolling through curvatures of time, it has metamorphosed into a different manifestation -- not as a homophonic melody but as a polyphonic composition, with different historical voiceovers -- a testimony to its complex communal history.

Jumping over garbage heaps, we began walking on the pavement where vendors had set up stalls of saris, blouses, bangles, sweets and flowers, and the air resounded with traffic noise, cries of shop-keepers and haggling of shoppers.

My zooming vision was arrested by the lilts of kirtan, floating from gurdwara Shish Ganj Sahib, constructed in the 18th century by a Sikh general, in memory of Guru Tegh Bahadur, executed on the orders of Emperor Aurangzeb. According to a popular story, the severed head called ‘shish’ had been taken away by a disciple of the guru and was cremated at Anandpur Sahib. But at the site of beheading was built the ‘shish’ shrine.

Guru had earned the ire of Aurangzeb for advocating religious freedom for Kashmiri Brahmans and, eventually, for refusing to convert to Islam.

As the sun rays glided on the golden domes, playing hide and seek behind chhatris, and the devotees climbed the stairs to enter the sanctum sanctorum, the beaming face of Bhagat Singh printed on a T-shirt, hanging from a makeshift clothes stall near the gurdwara entrance, caught my attention.

The turmeric-turbaned young salesman told me that Bhagat Singh was a popular hero of Indian youth. And I recalled that, a few years back in Lahore, at the place where Bhagat Singh had been hanged in 1931, some activist-intellectuals had launched a movement to name his spot of hanging as "Bhagat Singh Chowk." "Isn’t he a son of the soil?" questioned Pakistani activists.

But after the opposition of religious parties, the plan had been dropped by the district government, Lahore.

Perhaps he was bhumiputra (son of the soil). But, above all, a bhagat who, in the Indian spiritual traditions, serves humanity out of divine love and that selflessness is deeply rooted in the negation of desires and impulses of ego.

Nirvana Upanishad in a beautiful sutra describes the inner state of such a bhagat: "His own nature is his liberation".

In the recent student protests at Jawaharlal Nehru University (JNU), Bhagat Singh has been upheld as an epitome of deshbhakt (lover of land) on both sides of the dividing line but, ironically, this bhakti can become a rallying cry for bigoted jingoism. Time is witness, with all its passing, pulsating moments, that kings, princes, rajas and shahs have raised the slogan of patriotism, security, honour, and glory to expand their temporal power, and many bhagats were maimed, killed, and beheaded when they opposed their power shenanigans.

Bhagats suffer while kings and politicians prosper on their sacrifices.

Adjacent to the gurdwara is Sonehri Masjid, with three golden domes and intricate lattice-worked balconies. Again, if we turn the time dials backwards, from its rooftop, Nadir Shah Irani provoked by stoning of his troops by residents of Chandni Chowk had brandished his glistening sword, to signal soldiers to begin the qatl-i-aam, and the streets were filled with blood of dilliwalas.

In the coming decades, the ransacking of the city by Ahmed Shah Abdali forces became a frequent phenomenon, and Mir Taqi Mir laid bare his sensitive heart with these verses:

With the dark, brooding thoughts swamping my heart, an old building opposite the Sonehri Mosque beckoned me to enter its marbled arches. I quizzed a shopkeeper about the building, who replied non-chalantly:

After climbing the stairs, I entered a spacious hall, with a checkered black and white marble floor, enclosed by a circular canopy. In a small hall, around a wooden table, some old men were reading newspapers and magazines.

"Where have you come from?" asked the caretaker.

"From Lahore," I replied, looking at the mandala, fixed on the office wall. Ignoring the expression of disbelief, knitted on his eyebrows, I asked him:

"Tell me something about the history of this building."

"It’s a sthanakas, a prayer hall of Sthanakavasins, a sect of Jainism, who don’t worship idols for spiritual attainment. But it also houses a library, with books and periodicals on Jainism, some penned down in Prakrit, which date back millennia. Before 1947, the political meetings of Congress Party were also held in the library."

From a drawer he took out a visitor’s book, where Pandit Jawaharlal Nehru, Kasturba Gandhi, Hakim Ajmal Khan and Rabindranath Tagore had entered comments about the support of sthanakas to the cause of freedom struggle.

Appreciating his interest in cheerfully explaining Jain religious practices, I told him that I had brought my kids to sthanakas to introduce them to a different religious environment.

"Yes, there was a Jain mandir in Lahore and it was vandalised. Perhaps the city has no Jain worship place now," he replied without a trace of bitterness.

Outside in the prayer hall, where Jain ascetic monks, called dhundiyas, as they search for truth or reality devoid of illusions, sit and pray, I looked overhead at a dot in the canopy, where all black diagonal lines met, and a verse of Baba Bulleh Shah came to my mind:

Ik nukte vich gal mukdee he (Everything ends in a dot).

Nothing better can be expressed than the aphoristic saying of Punjab’s favourite Sufi saint. Perhaps all stories, parables, myths, and moral lessons dissolve into a dot -- the centrality of existence.

My journey begins and ends here.

And what is beyond the dot? It can be experienced and expressed only by sadhus, qalanders, dervaishes and dhundiyas.

Chandni Chowk and around