Hiking the mountains in Ethiopia

Ethiopia’s majestic Simien Mountains contrast sharply with the country’s widely-held image. There is much more to the land than the challenges posed by famine and poverty 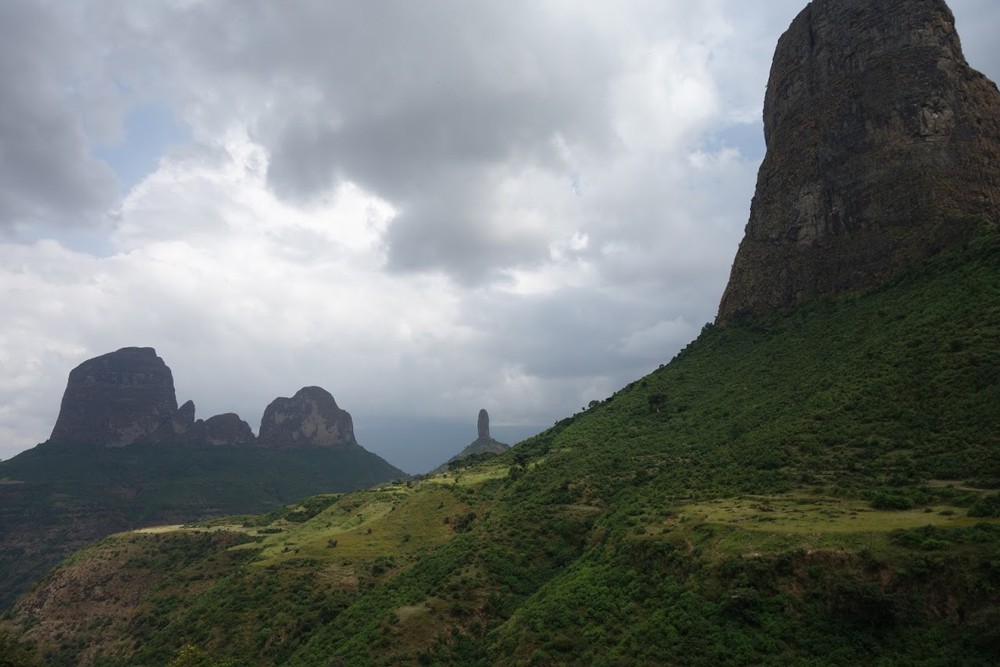 That’s the Simien Mountains of Ethiopia, a World Heritage site.

This is not what many would expect to see in Ethiopia. Some of us perhaps still associate Ethiopia with the deeply disturbing images of famine from the 1980s. Although risk of another famine remains, Ethiopia’s reality is probably much better than its perception. Today, Ethiopia is one of the fastest growing economies of the world with booming tourism. Looking for a memorable hike in an emerging destination, I joined an organised trek from the United Kingdom to the Simien Mountains of Ethiopia in October 2015.

Simien Mountains delight you with cliffs, birds, and animals. The cliff drops are many and awe-inspiring. On some hikes, you get to see one or two cliff drops; here we saw them all along the trek, and offering panoramic views. The walking paths are such that you are neither too far from the edge, nor too close -- the cliff drops inspire rather than scare you.

It is a bird-lover’s paradise. I learnt that there are more than 180 species; some of them native to Ethiopia, including the Lanner falcon, Wattled Ibis, Tacazze Sunbird, Lammergeyer and Egyptian Vulture.

While most animals and birds required some effort to spot, the baboons were hard not to see. They were everywhere -- running down the steepest of cliff drops, doing somersaults, as if performing in a circus. One day we saw hundreds of baboons running down a slope as if they had gathered for a political rally. The baboons here do more rallies than we do in Addis Ababa, joked our Ethiopian guide Meseret.

We were lucky to catch sight of the elusive Simien Fox, also known as the Ethiopian Wolf. But a truly wonderful surprise came when on a foggy afternoon, an ibex walked into our camp site at Chennek. I have seen an ibex before but from hundreds of metres away through the powerful zoom of a Sony handy cam on the K-2 trek. That one could see an ibex staring back, just a few metres away, unconcerned by one’s presence, was not something I had considered possible. But at Simien Mountains National Park, it is -- an unforgettable sight.

It was supposed to be a challenging hike, and that’s what it turned out to be. The hardest part was climbing Ras Dashen, 4550 metres, the highest mountain in Ethiopia. It took nearly 12 hours, from the time we left our camp, well before sunrise, to the time we returned, close to sunset. The altitude was not more than what most of us in our group had experienced in other hikes. But the cumulative ascent (6500m) and descent (7650m) over the 10-day hike was challenging. To make things difficult, we had three consecutive days of 10-hour hikes, which tested our nerves as much as our knees.

Because the trek was organised by a commercial operator, the hard work for the tourists ended when we reached the camp site. The Ethiopian staff took care of things -- from setting up camp to fixing the meals. A couple of the staff members spoke English and it gave us a few glimpses into their hopes for a better life pinned on greater tourism.

It was not all smooth sailing for us despite the comforts. The risks revealed themselves when things went wrong. One of us fell while we were coming down a long descent. She badly twisted her ankle and had to be carried down to safety. There was no hope of any helicopter rescue or even a ground ambulance -- things that are often taken for granted in Western Europe. To our dismay, the injury forced her and her husband to abandon the trek. Later, we got caught in a storm on a day when we were least expecting it. Wet to our socks and unable to see very much, we hurried to the next camp site only to find out that some of the mules carrying our camping gear had an accident and couldn’t join us because of a flash flood. It took patience to recover from the effects of the storm but fortunately, other than some bruises and wet gear, we largely got away with it.

While tourism in the Simien Mountains is improving the lives of the locals, it also has its share of negative effects. Some tourists give the local kids some sweets, money, or a trinket. This may seem like a harmless act of love but it is not. It gives the kids the unwanted lesson that they can beg something out of tourists, only if they tried. As soon as they saw tourists, kids quit their work and games, and chased the exasperated visitors with incessant demands for a candy, some money, or a pen.

The irresponsible giveaways by tourists have a similar negative effect on the animals. They seem to draw the lesson that if they can get food the easy way from humans, why bother finding it the hard way from nature?

Practicing responsible tourism is about demonstrating care about the long-term consequences of your actions on the host society and environment. To act responsibly, we avoided the usual giveaways. Instead, we attended a coffee tasting session organised at the house of a family without sufficient income. Freshly grounded by hand and prepared in the traditional Ethiopian way, the coffee smelled so nice and tasted so good, it had even non coffee drinkers requesting a second and then a third cup. We also took gifts -- educational posters and solar lamps -- for a local school. It was no easy task carrying these things all the way from Europe on flights, buses, and mules to a small school deep inside the mountains in the village of Chiro Liba but our Romanian guide Alex took pains to make it happen. It was a gesture full of meaning. It showed that even if we were foreigners just walking through their village on an afternoon, we wished them well.

On the last day of the trek, we walked downhill through a green valley to Addi Arkay, where we were scheduled to catch a bus. It was a lovely day after a rainy night, and we were enjoying the magnificent views of the Simien Mountains and enchanting sounds of birds. After about two and a half hours of walking, we reached what we thought would be one more village but was more like a shanty town.

The poverty and misery in this village made a striking contrast with the pure and majestic natural beauty in the background. With no water drainage or waste management facilities, the path running through the village huts was nothing but a filthy mix of mud and mule dung. Swarms of children -- barefooted and dressed in rags, gathered around us, wanting to talk and shake hands. While such a village can be found in any developing country, after the peace, quiet, and natural beauty of the Simien Mountains, we were finding the sudden exposure to the crowd, the filth, and poverty rather bewildering.

We continued to walk through the village, trying to get out of there as soon as possible. Then something unusual happened. Two of us spontaneously lent out their hands to the many children asking for a hand shake. Soon enough they had three kids on both sides, each holding hands with the other, all seven walking together. More of us and more of the children followed suit. The kids meant no harm, they merely sought amusement, and they found it. We did not mean any disrespect, we were just overwhelmed, and we got over it. Now walking through the same village hand in hand, the kids were giggling, and we were all smiles. Yes, we were strangers, living very different lives continents apart, but in that innocent moment, we could feel the human connection with each other at the feet of the Simien Mountains.

Hiking the mountains in Ethiopia