Travelling to and around Mirpur Khas evokes symbols of the past -- the historic metre gauge train and train stations, all of which have been lost to apathy 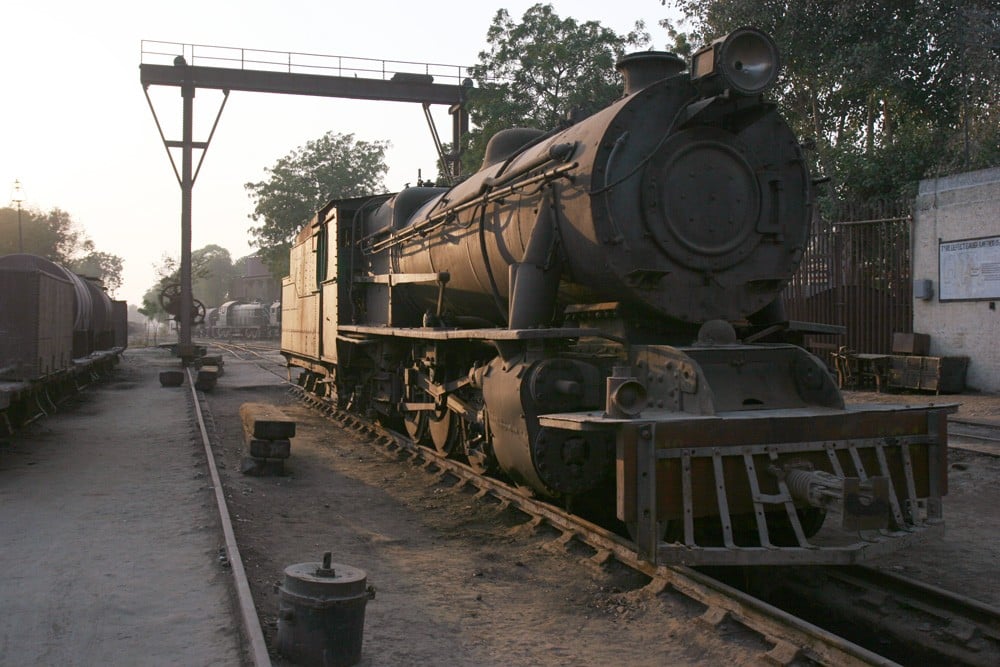 The past truly is another country. Inspired by Paul Theroux’s classic in travel literature The Great Railway Bazaar, I endeavoured to execute a Little Railway Bazaar. And so I embarked upon a series of train journeys in Pakistan. I rode the narrow gauge train from Bannu to Mari Indus; the metre gauge from Nawabshah to Mirpur Khas and from the latter place to Khokhropar on the Indian border. I was thrilled to explore the several crossings of the Nari River by those magnificent steel spans a century old at that time; and I beat the furnace wind of the desert plains of Dalbandin by a mere fortnight when I rode the Lonely Line to the Iranian frontier.

The fat, pot-bellied Ticket Examiner mentioned the name of the wind: bad-e-sad-o-bees roz -- Wind of a Hundred and Twenty Days -- and my flesh crawled. This was a sound from tales a thousand years old. Tales in which bells jangled as camels plodded through the dunes of this beautiful land of Balochistan; tales that told of caravanserais so remote that even today one has difficulty reaching their ruined walls. These were tales handed down around fires on freezing desert nights and preserved through the generations. Today, the wind still blows but train conductors no longer refer to it as the bad-e-sad-o-bees roz. A fascinating piece of tradition is forgotten.

That was in 1986-87. That is more than a quarter century in the past. That was another country.

All metre and narrow gauge lines have since been closed and the steel rails either dismantled or stolen by locals; timbers and equipment from abandoned railway stations pilfered. Service on many other lines no longer runs because we had a traitor masquerading as Minister for Railways who believed if Afghanistan could be all right (all right?) without a train system so could we by shutting down a magnificent infrastructure inherited from the Raj. With only a few trains running, Pakistan Railway is now sadly a mere shadow of the great North Western Railway we inherited at the time of Partition. It has soured somewhat like the memory of the Wind of a Hundred and Twenty Days.

Seeing us with cameras, some men came around to investigate. The railway men among them said the station building was ‘destroyed’. But they could not tell by whom or what.

Recently my young friend, Zaman Narejo asked what I would like to see around Mirpur Khas. The up-graded line through the desert to Khokhropar, I said without even thinking. And so there we were -- Sarah Rashid (no relation other than friendship), Mohsin Soomro, Zaman and I. We did not go by train but by road. About a decade ago, the old metre gauge line was upgraded to broad gauge and I went as far as Pithoro to see what it looked like. My lament then was (in this paper) that the metre gauge line should not have been uprooted. In another country where history was valued, the new and the old would have been inter-laced and perhaps one day, revamped metre gauge steam engines would have hauled tourists to the border and back.

But we don’t do such things in Pakistan. We obliterate the past.

Our first stop was Chhor made in a mere hour or so out of Mirpur Khas. Back in that long ago winter, the train had taken five hours. The station was exactly as my memory preserved it: compact, white-washed and uncrowded. This time a bunch of men sat under a tree on the platform playing a card game. Mohsin said they were gambling. I thought that was pretty nifty. A nice way to while away a Sunday.

On my train ride, the MG-2 (as the service was called) took on a number, five, I think, of water tankers at Chhor. These were to deliver water to stations en route to the end of the line at Khokhropar. It was almost dark when we pulled into the station of Parchi ji Veri -- the Well of Parchi. I was riding the foot-plate and as we drew near the station the driver let out a long shriek on his whistle. In the gloaming I saw a stampede of animals making for us. There were goats, sheep, camels and a number of wide-horned cows.

The fireman leapt off, ran to the first water tanker and taking the hose filled two or three large troughs by the line. The animals jostled, goats between the legs of camels and oxen butting everyone else out of their way. The driver said villages ahead of Chhor -- having scarce potable water -- they had to fill the watering troughs for animals daily. The animals, he said, were so accustomed to the train that they recognised a hoot on the whistle as signal to come and drink up.

In my memory, there was a tiny station building with a thick bougainvillea rich with blossom covering much of the veranda. But this time round, there was no building. Even the prescription sign was gone. In its place was a tin sign painted blue and simply lettered ‘Parchi Station’ in Urdu.

Seeing us with cameras, some men came around to investigate. The railway men among them said the station building was ‘destroyed’. But they could not tell by whom or what. I asked if the two or three earthquakes since my last visit in 1986 were to blame. But the men were vague and repeated that it was over. Gone.

Ditto at Jalu jo Chaunro -- Jalu’s Chaunro (conical thatched hut). Where I imagined the railway station had stood, was now a new-fangled mosque. Here too no one could say what befell the station building. Nor too did anyone seem to recollect where it stood.

Later that evening, wracking my mind in the quiet of Zaman’s guest room I was overcome with doubt about my own memory. In those wintry days I had also ridden the metre gauge train out of Mirpur Khas on the Pithoro-Jhudo loop line as well as that from Nawabshah to Mirpur Khas. Could it be that the abundance of mental images were all mixed up? My diary from that time was lost in the several moves we made, first from Karachi to Lahore and then within Lahore. And the few thousand 35 mm transparencies of those early years were all lost to poor storage, victims of humidity and fungus. There was no way I could confirm what I had seen in the winter of 1986.

Khokhropar was still the same, however. The train whose antiquated locomotives did a leisurely 30 km per hour had taken a grand twelve hours for the journey of 124-kilometre journey. Now we were there in less than four hours after setting out of Mirpur Khas. And we had had extended halts at three stations.

I peeked inside the waiting room where I had spent the night before riding the train back very early next morning. It was timeless; nothing had changed.

In those far off days, there were two trains daily between Mirpur Khas and Khokhropar. Now, since the line has been up-graded, there is, if I am not wrong, a weekly train from Karachi all the way to the border for Sindhi visitors going across. Once, starting nine decades before my journey, metre gauge trains ran all the way from Hyderabad to Jodhpur. Today, the terminus on our side is Khokhropar and on the Indian side Munabao. And, if one is to believe hearsay, the border crossing is more tedious than one would like it to be. But then Pakistan is a security state and India the enemy.

This line had a raison d’être -- the Karachi Chamber of Commerce considered it an economic injustice that all Rajasthan trade should reach Bombay by the Bombay Baroda and Central India Railway depriving Karachi of much needed revenue. This metre gauge line, completed in October 1900 became a quicker and cheaper access to a port city and a revenue-generator for Karachi.

On my train journey of 1986, I overnighted at Khokhropar where the garrulous station master put me up in the First Class Waiting Room (Gents). At three in the morning with the sky a blaze of starlight and a dry mist rising from the dunes, the train left for Mirpur Khas. The return journey was tedious and I got off at Chhor where the blacktop road then started (or ended, depending which way one looked at it) in order to ride the quicker bus back to Hyderabad.

It is a long story of being picked up by military spooks. In blue jeans, sticking out like a sore thumb among Thari peasantry, I was for them a spy for I had a camera and a backpack. It was only sheer good luck that the civvies-clad bearded spy-master interrogating me was visited by an Engineers captain in uniform and I got to know his credentials. Only a few years out of the army, my army-speak came in handy and in quick time I became ‘sir’ to the spook captain. My life was saved or, as the spook had said, ‘Sir, I was all set to send you for third-degree.’