Confluence of history, flavour and colours

Mahabalipuram, a coastal town located 60km from the city of Chennai, is one of those destinations that you would love to go back to 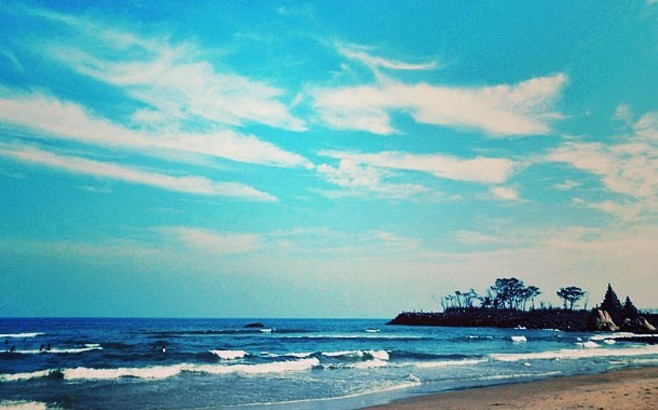 Sundays at the J-School hostel (Asian College of Journalism) were usually about lazing around, washing and relaxing your journalistic brain. But at the same time, Sunday was the only day of the week when we actually got to do things we loved the most to break the monotony -- travelling, watching films, going on secret dates and so on.

One Sunday, along with two of my closest allies -- Amit (the writer in our social group) and Jawed (the martial artist from the land of Buzkashi, Afghanistan) -- I decided to visit Mahabalipuram.

For those who are reading about Mahabalipuram for the first time, if you ever visit the Indian city of Chennai in the state of Tamil Nadu down south, you cannot afford to skip the trip to Mahabalipuram.

60 kilometres away from the main city of Chennai, Mahabalipuram was a bustling seaport during the time of Periplus (1st century CE) and Ptolemy (140 CE). Historians say that ancient Indian traders who went to countries of south east Asia, usually sailed from the seaport of Mahabalipuram --Wikipedia

The three of us woke up early and decided to sip some coffee and tea before boarding our bus to the coastal town. Jawed assumed that we would end up having a picnic of sorts, so he stuffed his bag with some edibles (we did not eat them, instead we ended up having a sumptuous lunch later in the day).

After a cup of refreshing filter coffee, we boarded our bus. Best way to reach Mahabalipuram is by bus (AC/non-AC buses are easily available from the Thrivanmiyur Square in Chennai); you can opt for cabs too. It usually takes around an hour to reach the Mahabalipuram town bus depot. On your way to the town, you will be greeted by the sea breeze, the blue sea peeping out from the woods that occupy the sides of the road.

Once we reached Mahabalipuram, we started our sight-seeing with the Sthalasayana Perumal (Lord Vishnu) Temple constructed in the Dravidian style of architecture. One of the striking features of the temple is the four-tiered "rajagopuram" (temple’s gateway tower as seen in the picture). There were some women busy with rituals and worship inside the temple complex, wearing the same colourful red and yellowish sarees which stood out among others who were wearing the traditional silk saris. I found out that the former were pilgrims from the Indian state of Rajasthan. There were a few foreigners dressed in Indian salwar kameez and observing the rituals.

The coastal town of Mahabalipuram or Mahabs (as the new-age youngsters call it) is known for its rock-cut sculpture and you would find a number of shops which specialise in the art. From miniature rock-cut souvenirs to giant statues, you can buy it all. I got afew miniature elephants carved out of rock for my friends back in the hostel.

From the Lord Vishnu temple, we took a walk to the Lighthouse.

The first light was commissioned here in 1887. The lighthouse with a circular masonry tower made of natural stone became fully functional in 1904 and is considered to be India’s oldest lighthouse, built around 640 AD by Pallava king Mahendra Pallava, and stands next to this modern structure. The Pallava era lighthouse is a protected monument, maintained by the Archaeological Survey of India. --Wikipedia

Close to the lighthouse, was a massive crowd with most people trying to click the best shot from vantage points. The height surely helps you to catch a glimpse of almost the entire town -- kind of a bird’s eye view.

There are a few cave temples too within the vicinity of the lighthouse depicting scenes from Indian mythology.

After that session of walking and climbing, we finally quenched our thirst with tender coconuts -- natural and best way to do so in this part of the world.

Our next stop was the monument complex Pancha Rathas. We could see kids and other visitors trying to sit on top of the rock-cut structures of elephants and get clicked.

Pancha Rathas (also known as Pandava Rathas) is a monument complex and an example of monolithic Indian rock-cut architecture. Dating from the late 7th century, it is attributed to the reign of King Mahendravarman I and his son Narasimhavarman I (630-680 AD; also called Mamalla, or "great warrior") of the Pallava Kingdom. An innovation of Narasimhavarman, the structures are without any precedent in Indian architecture. The complex is under the auspices of the Archaeological Survey of India (ASI) and is part of the UNESCO World Heritage site inscribed by UNESCO as Group of Monuments at Mahabalipuram.--Wikipedia

Jawed put his rock-climbing skills to test by climbing the huge boulders there. Our legs were a bit tired and we took a breather on the greens near the rathas, enjoying the sea breeze and the clear blue skies over our heads.

After checking out the intricate details of the rock-cut Pancha Rathas, our next pit-stop was the Shore Temple. The structure is one of the most loved tourist spots in this historical town.

The structure is incredibly alluring and definitely a good choice for those who love to play a game of hide and seek. Patches of brown, green and blue in the distance, make it a very picturesque.

So, once you are done checking out these historical sites and want to enjoy the best food in entire Mahabalipuram -- ranging from sea food to continental cuisine and so on, you should visit Buddha Cafe. The very friendly owner, Imtheyas’ kitchen dishes out the best delicacies which would surely tickle your tastebuds; from fried fish, prawn curry and many more lip smacking preparations. Don’t miss the milk tea. Once done, do take a walk on the beach which is five minutes away from the café.

Jawed, like other tourists, decided to take a dip in the sea. Amit and I sat on the beach, clicked some pictures as usual and enjoyed the view -- the fishing boats venturing into the blue, birds taking flight, foreigners sunbathing and a guy juggling yo-yos in a very mesmerising and amusing manner. It was truly a magical Sunday.

Mahabalipuram is a place which is not only enticing, but one that you would love to go back to. And one day is kind of enough to check out all these sites mentioned in the write-up. So next time you are in India and visit Chennai, do take out a day to enjoy the history, flavours and colours of this splendid coastal town.

Confluence of history, flavour and colours