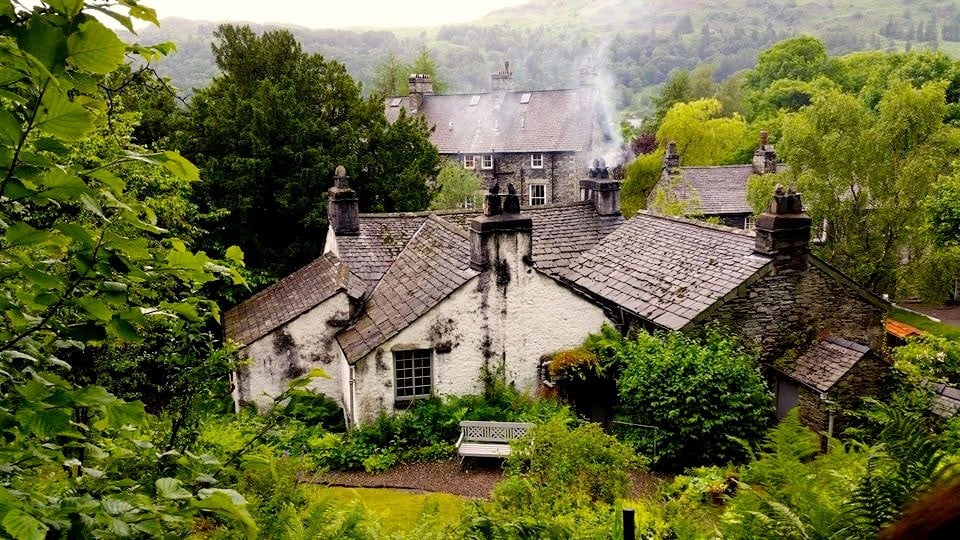 "So, who remembers any lines by Wordsworth?" My mom turned to us from the front seat of our rental car. It was a grey summer morning, and in the two hours since we had left Edinburgh, we had already encountered several bursts of rain. My brother looked up from his phone and shrugged. "I wandered lonely as a cloud…" he said, after a moment. "Um. Something about daffodils? That’s all I remember."

We were on our way from Edinburgh to London, a road trip which takes about nine hours on the most direct route. If you take your time exploring instead, the possibilities for sightseeing are endless. And if you - like my family - love the classics of English literature, there are a couple of detours you will definitely want to make.

My mother, prepared as always, pulled out a volume of classic poetry from her bag. "I wandered lonely as a cloud, that floats on high o’er vales and hills," she read out loud. "When all at once I saw a crowd, a host of golden daffodils."

William Wordsworth wrote those lines over 200 years ago, but the landscape he was describing - that of England’s remote Lake District - remains remarkably unchanged. The area is famous for its tranquil beauty: dozens of lakes, forests, and mountains (or "fells"), punctuated only by winding roads and quiet villages. What makes this scenery even more special, however, is its association with some of England’s greatest literary figures. Aside from Wordsworth, these include Samuel Taylor Coleridge and Robert Southey, who also lived in the area around the turn of the 19th century. The trio is often collectively referred to as the "lake poets," a term which binds their work closely to the land which often inspired it.

A trip here, then, is something more than just a countryside escape; for literary enthusiasts in particular, it is a glimpse through the eyes of romantic era masters, and a homage to their achievements.

From Keswick, a small town in the heart of the district, we had access to the many picturesque valleys, mountains and lakes celebrated in the poets’ writings. To experience the landscape as they once did, the best way to go is by foot. Many walking trails crisscross the area; you can take a leisurely hike up Skiddaw mountain (mentioned in Keats’ poem Endymion), or walk the banks of nearby Ullswater, where Wordsworth saw the daffodils that inspired his famous lines.

Within the town itself, you can visit sites like the Keswick Museum or the quirky Cumberland Pencil Museum. During our short trip, we chose to spend most of our time outdoors instead, but on the last morning, we did make one necessary pilgrimage to Dove Cottage, Wordsworth’s old home.

Wordsworth first spotted Dove Cottage while on a walk with Coleridge in 1799. He loved it immediately; and within weeks, along with his sister Dorothy, he had moved in. They lived there for the next eight years, during which time Wordsworth married, had three children, and produced some of his most celebrated works.

Stepping into its whitewashed walls today, one is struck by its simplicity and small scale. As Dorothy wrote in her journals, the house - which regularly hosted friends and visitors as well - was often "crammed edge full." They were, in her words, "simple days of plain living and high thinking."

A short tour through the cottage takes you through the oak panelled rooms, the guide pointing out relics (like the buttery and coal fireplaces) and sharing interesting facts from the lives of its former inhabitants. From the upstairs study where Wordsworth used to write, there are views of the surrounding meadows. Next door, the Wordsworth Museum showcases original manuscripts and artifacts, as well as a modern exhibit. Afterwards, you can take your time wandering through the garden, which has been preserved beautifully in its original state. William and Dorothy took special pleasure in this - what they called their "little nook of mountain ground" - keeping it half-wild to mirror the surrounding landscape they loved. We spent our whole morning in Wordsworth’s world, and by when we hit the road, it was nearing lunchtime and starting to rain.

Within an hour, we came upon Windermere, the largest lake in all of England. Along its shores, we soon reached our next stop: Hill Top, the home of beloved children’s author Beatrix Potter. The 17th century farmhouse - now a museum - was Potter’s country home between 1905-1943, and the surrounding land served as the setting for many of her stories (like Peter Rabbit). Walking around, it is easy to imagine the world she created there, filled with talking animals and funny happenings. You can see some of those tales brought to life at the nearby "World of Beatrix Potter" attraction, but being pressed for time, we opted instead for a visit to the adjoining Beatrix Potter Tea Room. The sandwiches we had there (with vegetables from "Peter Rabbit’s garden") weren’t great, but the atmosphere was worth it - a busy room filled with laughing children and storybook decorations, where you can feel like a little kid again.

Back on the highway, we left the lakes behind us, heading towards West Yorkshire and our final stop - the Bronte Parsonage in Haworth. Tucked away in a sweep of steep hills, this tiny village melts into the dramatic landscape that surrounds it; a landscape of lonely moors and rugged peaks, featured in the works of the Bronte sisters. Up the sloping cobbled roads, at the top of the village, sits the Bronte Parsonage, where Charlotte, Emily, and Anne lived out their short adult lives. The Parsonage, now a museum, is also where the sisters wrote their most famous works, such as Jane Eyre (Charlotte), Wuthering Heights (Emily), and Agnes Grey (Anne).

The first room you see after passing through the entrance hall is the dining room, where - as we learned - the sisters used to pace around the table planning their novels. The black sofa is the same one where Emily died, at the young age of 30. The house is filled with such memorabilia, and the museum has preserved countless interesting artifacts from the Bronte’s time, from dresses to diaries to hand-drawn portraits.

Where the memory of the sisters really comes alive, though, is outside the museum walls, in the wildness of the moors and the lonely rolling hills. Leaving the museum, it felt like we could see evening close in around us. Clouds were gathering quickly, and we decided to take one last walk before it started to rain. We hiked towards Top Withens, which is said to be the inspiration behind Wuthering Heights. As we scrambled up the hills, the wind picked up, and you could imagine all kinds of voices in the howling noise. A storm was coming, but we walked on as long as we could, caught up in the eerie mood of our surroundings. No one said a word, but I knew we were all feeling the same excitement and awe.

Literature, like travel, can be a shared experience: the possibility of discovering something new together. Up there on the moors, it was impossible to say if we were more inspired by the new place we were exploring, or the old books we were remembering. Either way, it felt magical -- like something out of a story.