On two wheels with a river on the side

A cycling trip from Abbottabad to Muzaffarabad is a treat for the eyes. The scenic beauty leaves you spellbound and longing to come back again 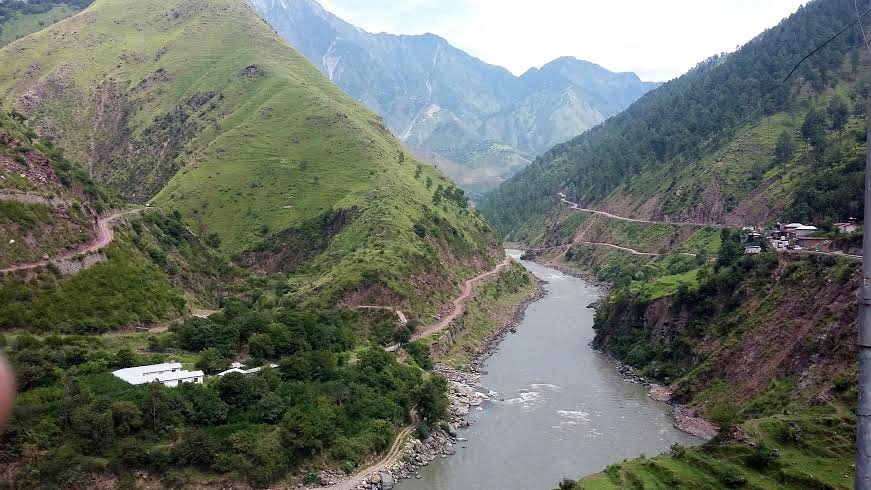 ("…again the loads are being mounted…")

The opening line of this popular Pushto folk song amply describes the state of my mind. With the onset of every summer, I always feel an inner urge to head north - on my mountain-bike. Then, nothing propels me more than avoiding the beaten path and jumping into the woods!

With this in mind, I had chalked out a plan for the summers of 2015 to go cycling clockwise from Abbottabad to Balakot to Naran to Jalkhad to Noori Top (12102 feet above sea level) to Sharda in the Neelam Valley and culminate my journey in Muzaffarabad, the capital of Azad Jammu and Kashmir. Even during the planning stage, it became clear that the most challenging leg would be from Jalkhad to Sharda via the famous Noori Top. With this and many other convincing reasons, I decided to follow the route clockwise.

I started off my cycling trip from Abbottabad on the morning of August 14, 2015. The first day was quite interesting and exciting. Due to the long weekend, it seemed everyone was heading towards Kaghan and Naran.

From Abbottabad, the downhill ride to Mansehra was quite pleasant with morning traffic buzzing past at full blast. I was dressed like a typical cyclist (luminous protective jacket, cycle-helmet etc.) -- something quite uncommon on the Pakistani roads. Taking (or mistaking) me to be a foreigner due to my attire, I was constantly and quite excitedly waved at and greeted by passersby in English, "hello", "good morning"  (even in the noon), ‘V’ signs and an odd  "hiyas" and "howdies", too!

Passing through villages with melodious names like ‘Chitte Batte’ and ‘Attar Sheesha’ (‘White Stones’ and ‘Perfume Bottle’ in Urdu) with relative ease and negotiating the steep ascent of Dumgala, I cycled smoothly into Balakot, the gateway to Kaghan Valley.

In the wee hours next morning, I set off with high spirits despite the daunting yet breathtaking steep gradient outside Balakot. River Kunhar with its raging white water was a welcome companion now; flowing next to the road throughout - inviting and patting me to proceed. Cycling through the crowded Naran Bazar, I made a beeline for PMA (Pakistan Military Academy) hut, located tastefully on the bank of River Kunhar.

The scenery which had been gradually becoming more picturesque with every step of the way after Kaghan, now turned even more incredibly beautiful past Batakundi. The glacier near Barwai is a welcome roadside resting spot, with abundant soft drinks made even cooler by the glaciated snow. When I stopped there, mistaking me to be a foreigner, many down-country tourists leapt towards me with excitement and enthusiasm to greet and express their pleasant surprise and appreciation. A good number even touched me -- and my bicycle, to see if I was for real! Though they would not say it, I think some were quite disappointed to find out I was a Pakistani like them after all! It is sad that some of us consider such ‘adventures’ the domain of westerners only.

The newly-constructed, all-weather metalled road, which originating from Mansehra passes through Balakot, Kaghan, Naran, Jalkhad, Babusar Pass and connects with the Karakoram Highway is very good. For me, Jalkhad can truly be described as the starting point of a real journey within a journey, which I reckoned had begun now.

In Jalkhad, nobody approved of my plan and I was advised against cycling over Noori Top. Someone even enquired if I was on some kind of punishment! However, the restful night recouped my energies and spirits for the expectedly difficult journey ahead and I started off from Jalkhad with renewed resolve.

Since riding the cycle was practically impossible due to big stones along the track, I was most of the time, ‘cycle-walking’. The shepherd, who had joined me from Jalkhad and was on his way to join his folks and herd was good company and lifted my spirits by (unexpectedly) quoting a verse from Urdu poetry,

which loosely translates as, "a determined swimmer treats even the dangers of high-tide like the safety of the home-bank."

Words fail me to aptly describe the mesmerising beauty and the surrounding serenity of the area with abundantly colourful flora and fauna in the lush-green meadows all around. It was a perfect scene to photograph for ‘See Pakistan’ tourist postcards and brochures.

What was merely a dot in the morning located in the far distance, turned out to be a tent pitched some distance short of Noori Top in the late afternoon. It belonged to the cheerfully hospitable workers of the Pak Army SCO (Special Communications Organisation), who invited me to stay in the tent with them for the night. I readily and thankfully obliged. Early the next morning, I walked out to immerse myself with the majestically towering beauty of Noori Top.

I heaved a sigh of relief near Noori Top thinking it was the end of a long and strenuous ‘cycle-walking’. The snow-covered peaks of Kashmir making their gradual debut from across the skyline appeared to be welcoming me to their beautiful abode. Now, confronted with appallingly steep downhill track, I was reminded of an old Arab proverb in which the camel, when asked whether he liked ascent or descent, beseeched God’s curse for both!

Staying the night at Surgun, located almost midway between Noori Top and Sharda, I was quite excited and jubilant to see Muzaffarabad-Kel road from atop the mountain track. Sharda, the sub-district headquarters of District Neelam, is located on the bank of River Neelam and is surrounded by beautiful tree-lined peaks. Locals attribute its name to a Hindu deity of the same name along with another one; both pronounced in the same breath as Sharda and Narda Devi with no dearth of superstitious stories about them. From Sharda, one can either venture towards Kel or go back to Muzaffarabad. The overnight stay in the unit mess was invigorating and helped me recharge.

River Neelam, now calm and now gushing with noisy white-water rapids, was my continuous companion from Sharda to Muzaffarabad. Pedalling along this road in Neelam Valley with a song in my heart and breathtaking scenery around, I stopped at Dudnial and Neelam to absorb and appreciate the beauty and spent the night at Jura. From here on, the valley opens up a bit; passing through Nauseri, Neelam-Jhelum hydro project and almost beneath the dominating Indian posts along the Line of Control, I swished past the imposing cone-shaped and properly-named Chunj Feature towards my destination, Muzaffarabad, which I reached in the late afternoon on August 21, 2015.

After a much-needed rest of a few hours in the comfortable confines of the Brigade Mess, I along with my bicycle boarded the night coach for my hometown Lahore.

On two wheels with a river on the side