To the village of Baral in Azad Kashmir, where an ancient fortress seems to be crumbling to dust 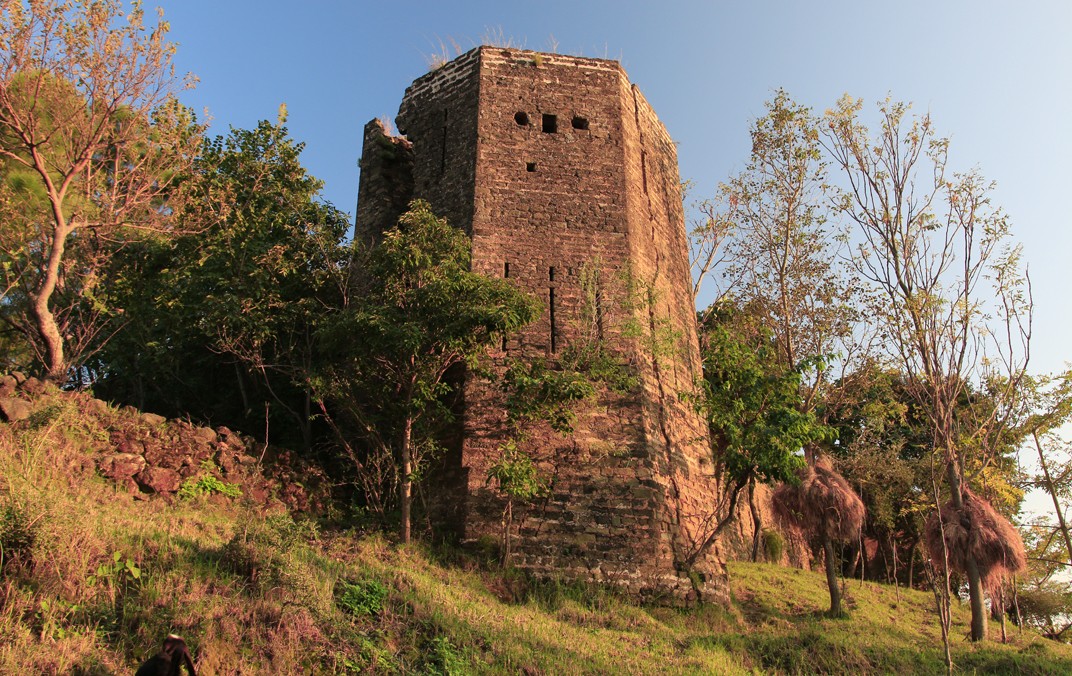 A rather scenic and winding tarmac road connects Palandri with Baral (pronounced Baa-Rull), 50 minutes away due south. Baral has not much to show for itself but 20 minutes south of the clump of houses there sits on a low eminence a tiny fort taking its name from the village.

Shaped like a fisted hand with a stubby thumb sticking out to one side, it is tiny -- measuring no more than 40 to 50 square metres; the fisted hand being its square plan and the thumb its entrance portico. The corner turrets are octagonal and I at once recalled the forts of Muzaffarabad, Ramkot, Baghsar (near Bhimber) and Mangla -- Baral and all these were apparently built from the same template.

This template comes from the last quarter of the 15th century. In those uncertain times, the unruly and mysterious Chaks erupted on to the scene as if out of some void. These ferocious fighters are believed to have come from what we now call Gilgit-Baltistan. They defeated and replaced the able and aging Zainul Abedin and established themselves as rulers and for a full 100 years Kashmir remained under their control. In the 1580s, Akbar was finally able to wrest Kashmir from them, but not without considerable difficulty. It was on the third desperate attempt that his sizeable army could defeat the Chaks.

As mysteriously as they burst upon it, the Chaks disappeared from the scene. Today, they are found in scattered populations across northern Punjab and Kashmir.

We believe the Fort of Muzaffarabad was the work of the Chaks. Ramkot and Mangla, both overlooking the Mangla reservoir as well as Baghsar, built well into the 16th century followed the same design established by the Chaks. For some reason, the template was favoured in Kashmir.

Back at Baral, my friend Nadia Akram who had been here before led us into the fort through the west-facing entrance. It was reworked very likely after the Dogras took Kashmir in the 19th century. They added an ornate cusped arch to the doorway. Sadly, it stands heavily vandalised with the timbers of the jamb and the gate torn out of their housing. On either side of the doorway, the wall has two square slots into which heavy beams were run to reinforce the timber door.

The portico was once two-storeyed. We see the damaged masonry from where the beams for the roof were wrenched out. This would have happened after Partition when this part of the world became a free-for-all for I have seen similar vandalism all over the country. The ground floor and what was once the upper storey both have loopholes all around. Above the entrance, there is a rectangular opening at the upper level -- the machicolation from where they poured boiling oil or water on attackers at the gate. Unlike the Mughals who had stylised hooded machicolations as we see in Attock and Rohtas, the Chaks made do with a simple opening for the purpose.

Interestingly, both storeys also have fireplaces. This means that this turret was not just defensive; it served as living quarters too. The ground floor would have been soldiers’ barracks while the upper was reserved for the darogha - the keeper of the fort.

Inside the enceinte were only signs of neglect and ruin. The three corner turrets were thickly overgrown with vegetation; and fearing snakes, I refrained from entering. Though I could climb up a stairway to the brink of the fortification, it was impossible to walk around the wall because the narrow ledge had crumbled away.

All around, the fortification crumbles with cracks in the walls. The northwest turret is marked by a large fracture jagged like a bolt of lightning. Surely, every shower of rain adds to its size. One day in the not very distant future, the turret will come down in a heap of masonry. My cursory study turned up no graffiti or any other writing and there were no stories that Nadia could tell about the fort. It seemed even the locals keep no lore for the Fort of Baral.

As we were leaving, Nadia recalled hearing that Baral was in direct line of sight with a similar fortress at Sehnsa near Kotli. And that the keepers of Baral lit nightly fires to signal them that ‘all is well’. We walked to the edge of the knoll and looked out to the south into a deep, purple valley muted by the fuzzy haze of wood fires and the dry mist of October. The story of Baral being visual with Kotli may well be true.

If Palandri was on the direct road between Poonch and Rawalpindi, Baral lay well off it. In fact, Baral Fort seems not to have a road to guard. It could have been built by the Chaks only to tell the people of Kashmir that they had eyes everywhere. After the fall of the Chaks, it was surely used for the same purpose by the Moghuls but they left no mark on it. The Dogras added their signature with the beautified main entrance.

And then came Partition. We ripped out the 400-year-old timbers from a perfect edifice to tell the world how much we care for our built heritage. Now we wait for Baral Fort to crumble to dust.