Pearl of the east coast

A visit to Puri, the wonderful coastal city in Odisha, India, which offers the best in terms of both culture as well as flavours that touch your soul 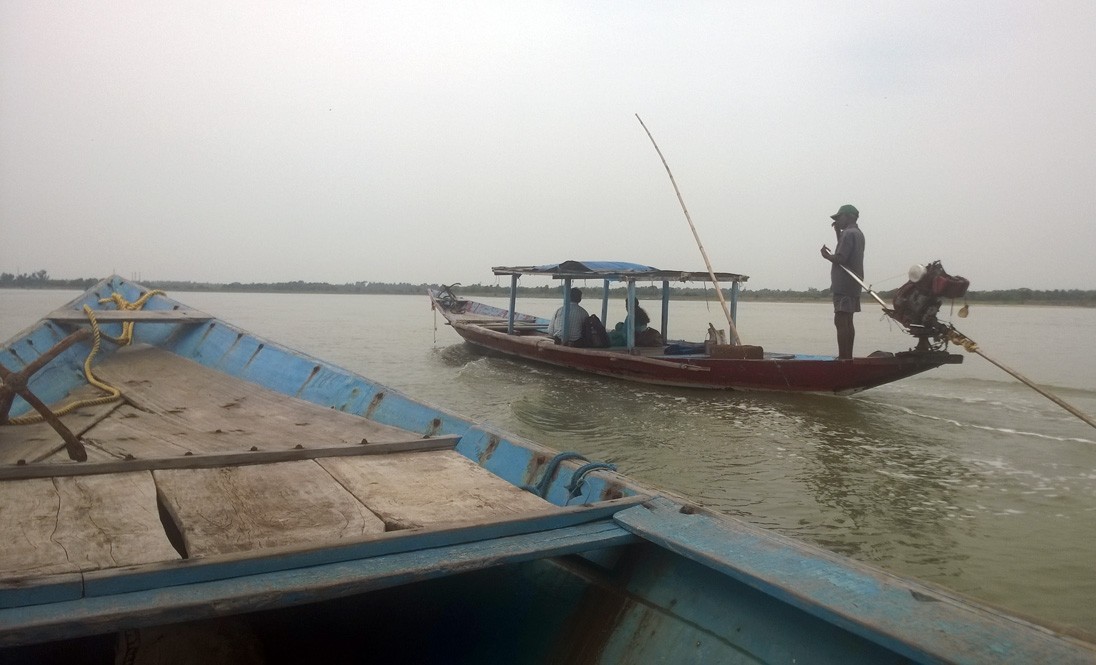 Puri is considered to be one of the four holy dhamas (abodes/sites) that are widely revered by Hindus of India (the others being Dwarka, Badrinath and Rameshwaram). Puri is located 60kms from Bhubaneshwar (capital of Odisha), on the coast of the Bay of Bengal. The best way to get there is the overnight train from Kolkata (West Bengal).

The train leaves from Sealdah around 8pm and reaches Puri at 4.45am the next morning.

The last time I visited the coastal city of Puri was way back in 2004. During that trip, I didn’t indulge much into the flavours and culture of the place so this time I decided to explore more.

We had no prior booking at any hotel but had zeroed in on one only to discover that the receptionist was nowhere to be found. So my father and I decided to take a walk and check out a few other hotels along the beach while my mother took a breather and waited for the receptionist at the hotel. A few minutes later, father and I decided that we should check in at the Victoria Club House hotel that seemed to be the only best hotel around. Though there are loads of budget hotels near the beach, we decided VCH should be your first and last choice. I guarantee you won’t be disappointed.

So once we checked in and settled down, we decided to take a stroll on the beach and enjoy the sunrise and the cool breeze with a blissful cup of cardamom tea. Looking closely, you might be able to spot some fishing trawlers and boats coming back to shore after the first catch and kids taking rides on the "ship of the desert".

Upon returning to the hotel, we decided that our next spot for sightseeing would be Chilika. Some breakfast to recharge our batteries and we were off to Chilika. We opted for the cab service provided by the hotel which is reliable. Our driver/storyteller/guide, Shatrughana proved to be one of the best raconteurs I’ve ever come across.

On our way to Chilika, Shatrughana took us close to the Lord Jagannath Temple (more about that later in this account) via the Grand Road (in pic). It takes around two hours to reach Chilika Lake from the main Puri beach.

Chilika Lake is a brackish water lagoon, spread over the Puri, Khurda and Ganjam districts of Odisha state on the east coast of India, at the mouth of the Daya River, flowing into the Bay of Bengal, covering an area of over 1,100 km. There are 11 small islands and small mechanised boats take you to some of these where the locals display pearls and you can even buy a few too. Chilika is known for a variety of migratory birds (usually spotted during the months of January-February). Another major attraction at Chilika is Irrawady dolphins often spotted off Satpada Island -- Wikipedia.

We decided to go for a boat ride. Shatrughana suggested that we visit the restaurants first and order the delicious seafood that would be ready once we were back. There are a number of eateries and restaurants which offer you mouth-watering delicacies ranging from prawns, lobsters, crabs to mackerel and so on. So once you have decided what you would love on your plate and you come back after spotting the dolphins (if you’re lucky), you can pay some amount of the bill and the humble cooks would start to prepare your lunch.
The boat ride seemed to be exciting at the beginning but then it transformed into a Sanjay Leela Bhansali film - picturesque visuals but no end in sight. The boatman, Ajay was a silent young guy who anchored the boat at a few of the small islands where the locals show visitors how farming of prawns and crabs is done, and also pearls and other stones/gems which are extracted from the bed of the lake.

The biggest disappointment was spotting one dolphin after 90 odd minutes.

That being said, you really can’t complain much because the increased plying of mechanised boats as well as intensified fishing and farming of prawns has diminished the number of not just dolphins but also the migratory birds.

Speaking of birds, in fact, we experienced something similar to the Hitchcock’s movie with the same title while returning to the shore as a number of crows flocked the boat to enjoy a share of the chips I was having.

The lunch had been prepared by the restaurant by the time we reached. The number of tourists was quite less and that in itself created a relaxing atmosphere. We had opted for some roasted crab, masala crab, French fries, prawn curry served with steamed rice and some daal. Shatrughana hadn’t exaggerated in the least bit; the food was exquisite.

On our way back to the hotel, he shared some insights about the current socio-economic scenario of the state of Odisha and many interesting facts about the fishermen folk and other tribal communities of the area.

The evening was spent at the beach checking out some of the numerous stalls selling fried crabs, prawns, chicken and so on. My father finally decided to have some more seafood. His obsession with crabs continued but came at a heady price -- as he ended up losing a tooth! We also hunted for the local sweet Gawja, a crispy sweet dipped in sugar syrup which looks a bit like patties. But unfortunately the shop which is best known for this had run out of it and we had to settle for some roshogollas.

A new culinary war has started with Bengalis and Odiyas fighting it out to claim who the real inventor of roshogolla is but that is a different debate.

Anyway, we decided to perform the quintessential pooja/rituals at the Lord Jagannath Temple the next morning followed by the much-awaited trip to the Unesco World Heritage site, the Konark Sun Temple.

There are pandas or religious guides who take you around the temple and help you with various rituals. Every hotel has a list of known pandas and it is advised that you take their word.

The next morning, we visited the Jagannath Temple. You need to submit your phone, cameras, shoes/slippers and enter the temple complex after washing your feet and undergoing a security check.

We performed the morning prayers and other rituals at the sanctum sanctorum which gets crowded at times but the smell of camphor and incense sticks transforms it into a magical world. Once you are out of the sanctum sanctorum, your respective panda will take you around the temple complex and share interesting legends and mythological stories related to the history of the temple. You can opt for the prasad and a full course (vegetarian) meal comprising lentils, rice and sweet dish (kheer/malpua) is delivered to your hotel in the evening.

Once we returned from the temple, we took a break, and a couple of hours later, we were again seated in Shatrughana’s cab and on our way to the Konark Sun Temple. It takes almost an hour to reach Konark from Puri and the roads are superb. A bit of a drizzle greeted us as we went past the forest cover with the Bay of Bengal on our right and Shatrughana’s interesting anecdotes as usual.

Some of my friends who had visited Konark earlier were surprised to see the excellent road infrastructure -- courtesy the pictures I shared later.

Konark Sun Temple is a 13th century Sun Temple, located 35km north of Puri at Konark in Odisha. It is believed that the temple was built by King Narasimhadeva I of Eastern Ganga Dynasty around 1250 CE.  Shaped like a giant chariot, the temple is known for the exquisite stone carvings that cover the entire structure. The Konark Sun Temple was accorded the status of a World Heritage Site by Unesco in 1984 -- Wikipedia.

In the evening, we went back to the temple complex to witness the grand flag-changing ceremony known as Dhwaja Parivartan. This happens on a daily basis. One of the members of the temple climbs to the top (214 feet) without the help of any cable or protective gear to change the flag. It is a visual treat which is bound to make your heart skip a beat. Unfortunately, I didn’t have my phone/camera to click/record this jaw-dropping spectacle though some videos exist on Youtube.

By the time we got back to the hotel, the panda had delivered the prasad/bhog. The next one hour or so was spent trying to finish the prasad (a full-fledged meal as mentioned earlier).

The final day was spent at the beach fighting the huge waves. After the antics at the beach, we visited some of the local handloom shops which sell some awesome range of traditional Kotki and Sambalpuri silk/cotton sarees, lungis and kurtas. While my mother decided to check out sarees, my father and I got busy selecting some kurtas.

After spending a couple of hours shopping and bargaining, we quenched our thirst courtesy tender coconuts. Then we went back to the hotel and enjoyed a sumptuous meal comprising prawn curry in coconut milk, tangra jhal (a small fresh water fish of the cat-fish family cooked with local spices), masala mackerel and pomfret fry with steamed rice. The delicacies were a fusion of Bengali and Odiya style of cooking and being a Bengali, my taste-buds had no reason to complain.

But the saddest part was, that a few hours later we were supposed to board our train back to Kolkata, bidding goodbye to this wonderful coastal city which offers the best in terms of both culture as well as flavours that touch your soul. So, finally, I found myself in the train ka dabba waiting for it to take me back to Kolkata, but I promised myself to revisit the awe-inspiring city of Puri and its humble and down-to-earth people soon. Till then I’d have to relive the memories via the snaps which have been shared in this account.

Pearl of the east coast