Hazy recollections from the early 1970s, of countless visits to these gardens, and wondering if the Orange Train is a consequence of a misunderstood wish 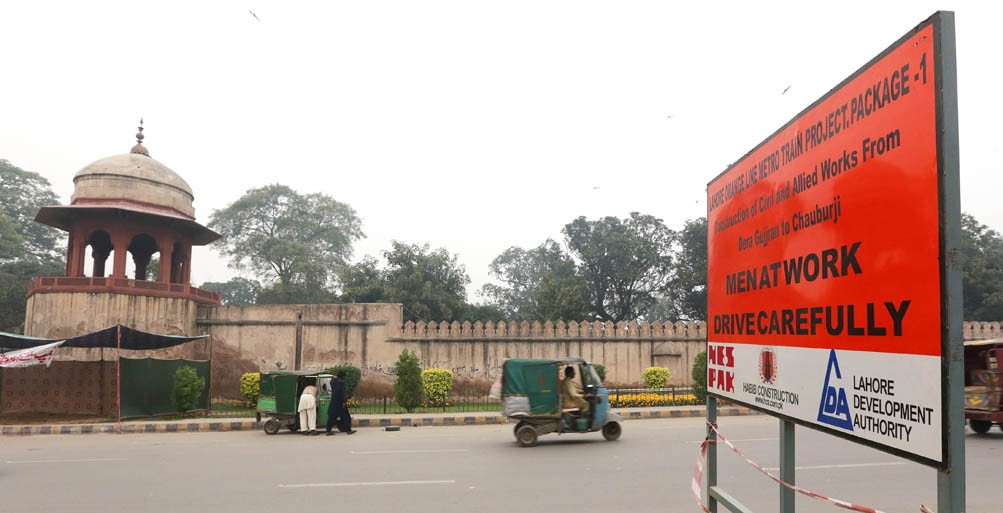 Whenever I think of the famous Shalamar Bagh of Lahore, rumblings of one hundred distant trains start resonating in my ears. Hazy recollections from the early 1970s of countless visits to these magical gardens -- visits which were never deemed complete, unless followed by a hazri at the adjoining Hazrat Madho Lal Hussain shrine.

Bunking our Municipal Committee School in the hot summer noon with a select group of three other friends to end up under the deep, drowsy shadows of countless mango trees of Shalamar Bagh was a favourite respite (I would always try to find a particular mango tree in Shalamar beneath which Baba Bulleh Shah and Hazrat Shah Inayat Qadri first met as narrated by my father).

And then a few, more organised visits to the same Shalamar Bagh in our shaggy school uniforms to greet the visiting dignitaries to these Gardens (students from Lahore’s corporation schools were easy fodder as compulsory attendees for these ceremonial visits).

One of these stately visits pertained to the year 1974 during the Islamic Summit Conference which for some inexplicable reason got permanently engraved on my memory’s tablets. Never did I realise that one day, these hallucinations of rumbling trains associated with Shalamar Gardens, will materialise into a trendy, Orange line, train.

Entry in this seventeenth century Mughal garden would always be greeted with feasting sights of rounded mango trees-some reportedly centuries ‘old. Apparently, the oldest of these -- near the Charbagh pavilion -- was the one that would always prompt the rich imagination of my father on all visits to these gardens. A young Baba Bulleh Shah had come to Lahore in his early youth, looking for a spiritual guide and on hearing about Hazrat Shah Inayat Qadri -- Arain by caste and head gardener of Shalamar gardens in those days -- reached directly "this grand" mango tree.

On reaching the tree full of ripe mangoes, Bulleh Shah longed to eat the fruit and, lo and behold, a mango broke from the canopy and landed directly in the lap of Baba Jee.

Entry in this seventeenth century Mughal garden would always be greeted with feasting sights of rounded mango trees -- some centuries old.

Shah Inayat was least impressed and, on his recital of some heavenly lines, all ripe mangoes from the tree fell to the ground, only to fly back in a few instants to the branches of the tree. From that moment on, Bulleh Shah was transformed to a most devout follower of Hazrat Shah Inayat Qadri, notwithstanding the social taboo of a Syed surrendering to an Arain, frequently referred to in Bulleh Shah’s poetry:

Led by our class monitor Pappu (a Kashmiri Butt), the three of us (a Syed, Arain and Jat each) would fiercely battle for honours accumulated over millennia in our respective hereditary lineages and claiming that mangoes from the old tree would fall in our laps. It must be a ridiculous spectacle as the four of us would stand under the old mango tree with spread out laps of our white school shirts, loudly invoking heavenly interventions to the best of our imagination.

Obviously, the grand tree never obliged us with magical mangoes except once when two quarrelling fruit bats ignominiously landed over our heads, leading to confusion, shouting and swearing out loud.

After that the four of us would wander around the garden, heading for groups of university students on excursion trips, sitting in small groups giggling and singing. We would select the more colourful picnic group to hang around and would resume discussion about our hereditary superiority.

Pappu Kashmiri would boast that Emperor Shahjehan had these gardens built in remembrance of the Kashmir valley from where Pappu’s ancestors had migrated; Muna Arain would take pride in the spiritual superiority of Hazrat Shah Inayat Qadri, and the fact that the area around the garden is known as Baghbanpura -- a locality of gardeners; Bubboo Jat would reminisce about Raja Ranjit Singh’s days in power for whom these gardens were a favourite pleasure haunt.

Those were golden Lahore days indeed.

Sometimes, our forays would stretch deep in the day till evening shadows lengthened and we would sit on top of one of the periphery walls to look beyond Shalamar Gardens. We would watch in awe huge crackling fires with rising smokes and unending sound of dhol, signifying the whirling dhamal proffered by devotees during the Urs days. Soon the moon rose and its light glittered still waters around the countless Shalamar fountains along with the rhythmic beat of dhamal and flickering lights from hundreds of earthen lamps.

In less than thirty minutes, we would ourselves be at the shrine, and spend hours dancing and engrossed in dhamal.

I do not remember whether any of us made any special prayer to this effect during our visit to the shrine of Madho Lal, but were pleasantly surprised when we came to know that all four of us would be part of our school contingent being taken to the Shalamar as cheering boys during the Islamic Summit reception. Welcoming kings and emperors, and scores of them, in our own Shalamar Gardens -- even emperor Shahjehan would be jealous of the honours coming our way.

On the appointed big day, Shalamar was presenting a festive look that we had never seen before. Smartly turned out contingent of police was putting the school boys’ groups on duties across the length and breadth of the garden. As luck would have it, the four of us along with thirty or so boys were made to stand just beneath the old towering, miracle tree of Baba Bulleh Shah fame. And miracle did actually happen, as our eyeballs nearly burst in awe and surprise for the next hour or so -- we could almost extend our hands to so many Shahjehans and touch them.

Smartly dressed Colonel Qazzafi (he looked every bit a movie hero to us), the burly Saddam Hussain, our heartthrob Yasser Arafat making victory sign every now and then, assuring our boyish hearts that only he could free Qibla-i -Awwal, Anwar Saddat (our hero who had made hell-bound Israelis lick the dust in 1973) and the big, fat Eddi Amin (who our accompanying teacher claimed could eat fifty samosas) and finally the ‘traitor’ Mujib-ur-Rehman.

We turned our faces as the last dignitary who had broken our beloved Pakistan passed by. We could only get fleeting glimpses of Prime Minister Bhutto with red swollen eyes from a distance. Pappu Kashmiri, a die-hard jiala (he still is) informed that Bhutto’s eyes were red and swollen as he had not slept for forty eight hours to make this conference a success.

And then, the refreshment for visiting dignitaries started. While kings and presidents and prime ministers were relishing sumptuous high tea, four of us, like dozens other boys, stood hungry and thirsty.

And then it all ended. We queued up outside Shalamar Bagh gate, each carrying a basket of orange-coloured petals. Black, shining cars, started creeping forward in a line as we showered the train of cars with a handful of orange flower petals. "Orange Train!" all four of us shouted, standing under the two giant trees just outside the Shalamar Bagh main gate. Little did we realise that these trees were also possessed of miraculous powers and our casual exclamation of Orange Train would one day turn into a reality.

Last week, when I was standing outside the Shalamar Bagh as part of a protesting crowd, agitating the likely damage to the garden from the proposed train, I was a deeply worried man. I was the only one in that small, colourful crowd of activists who exactly knew about the miraculous powers of the magical trees of Shalamar Gardens; trees which could bring nirvana to Baba Bulleh Shah.

It was with utmost difficulty that I suppressed the urge to narrate this story to the labour and contractors busy excavating the road in front of Shalamar Bagh who, I am sure, would have fled hearing this magical yarn from yesteryear.