"Art is still entrenched in the economic capitals of the world"

A man of many talents, Adnan Madani talks about art, literature, philosophy and more 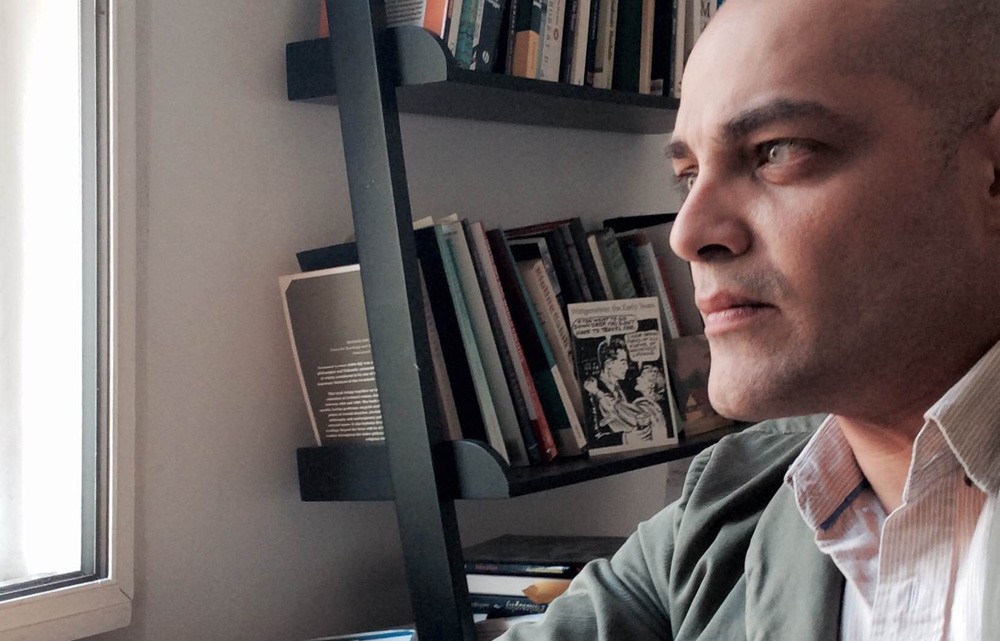 Adnan Madani is widely recognised for his originality of thought, intelligence and insight into ‘reading’ art. Trained as a sculptor from the Indus Valley School of Art and Architecture, Karachi (2001), he soon moved to his real interest: the realm of knowledge. Although he has participated in various exhibitions with his conceptual and sometimes minimal works, it is the world of word that seems to attract him the most.

Currently concluding his PhD at the Goldsmiths College London, Adnan Madani is an avid reader as well as an eloquent writer. He has been contributing essays to a number of magazines, including Art Now Pakistan.

The News on Sunday (TNS): What is the role of insomnia in your writing and reading? Do you pick certain kind of books during the day and different ones at night?

Adnan Madani (AM): Truthfully, I’ve never really analysed the matter in any depth. To be an insomniac has also meant a certain fear of approaching the subject of sleep, in case I scare it away for good. But reading began for me as a way of filling those hours when I was very young; and then the love of reading became a kind of contempt for sleep. The books I read now at night are less ‘useful’ than the ones I read in the day, less programmed. I think the anxiety of the night produces strange ideas and connections -- only some of which I remember the next day.

TNS: You have created a remarkable body of work, especially the video installation, Playing Chess with Duchamp (2001), in which you have incorporated clips of Marcel Duchamp’s footage along with your own and asked questions about Pakistani art; while his comments that were made earlier for something else seem to be responses suited to your queries. How did the idea of this video emerge and what are you thinking to work on in future?

AM: That work, which is now more than a decade old, was very rough, very quick, and far below the standards of editing and image production we now expect of any art student. It has taken me many years to come around to thinking of that as, again, -- a valid way of using found images, deteriorated information. The conversation with Duchamp came from a sense of mirroring, a feeling that as an art student I had moved not just in the shadow of a certain art history, but as a shadow of that history. I forget the words of that video interview, I remember this mirroring, shadowing as something I’m still interested in formally.

I have taken a long break from exhibiting, which is a bit of a cheating in some ways, but is also a way to avoid being swept away by certain tendencies I was unsure of. I hope to show you some new work next year though.

TNS: After more than a decade of making that video, if one asks the same question to you now, how would you comment on the present art from Pakistan?

Contemporary Pakistani art is political too, in that it often has something to say about an ‘issue’. It might be a matter of personal taste, but I do not relate to this kind of engagement much

AM: That’s a huge question. The changes in professionalism are obvious, but art is one place where we cannot talk about ‘improvement’ since every new detail and technology has an ontological value of its own; there is no end to be achieved. So I will avoid the question by saying that I think the really interesting things are to come, as Pakistani artists respond to the strange torques and shears of living in the shiny new art scene we have now, and in a real country that is going through very difficult times. There is so much to be done, and so many materials to work with, things that have not been done fully yet: the role of religion in our image of the body, our perceptions of animal life and animality, sexuality as it varies between Western 19th-20th century medicalisation and our own everyday lived experience, the texts that have shaped our culture, the rural imagination.

We simply need to find the tools to open these subjects up. The great thing about the late break from late modernism in Pakistan in the 1980s and 1990s was that the world seemed to have opened up, even if this opening was a fiction itself.

TNS: In a way like many other artists, you are also living away from Pakistan as diaspora if one refers to this term in connection with artists from Pakistan who were not displaced but left the country for other reasons. How do you feel has the fact of being away from Pakistan changed them and their art practice? What has been your own experience?

AM: This situation is so common now, and it follows from the fact that art -- whether we like it or not -- is still entrenched in the economic capitals of the world. To be more precise, the value of art is seen to be derived from its circulation in these capitals. So artists and writers, like nurses and IT workers, manoeuvre themselves towards these centres. In our case, however, we must also keep some connection with the country of origin, since that is the source of our value. In a very peculiar way, art has never been more national, more ‘cultural’ than it is today. The predominant life concern for most of us artists today is the visa. I’m sounding cynical, and perhaps I am. But this is just the fact of the art-world as it is, Pakistan included. How or whether we shift from this kind of existence to something more meaningful is the question. I suppose it depends on how you see the role of the artist.

TNS: Do you follow an artist’s practice and connect it with his statements, interviews, or you do not bother about what he says while looking at his work. In your opinion what is the role of an artist’s words in terms of understanding or enjoying his art?

AM: If an artist is just coming up with things to say because the gallery demands some intellectual swagger, then no I tend to ignore it. On the other hand, I see no distinction in value between reading the words, the thoughts of an artist and their ‘primary’ work. They are related activities. Artists’ notebooks, sketches, writings are part of a spectrum along which the artwork lies. Artist’s writings and art writings incidentally can have a different quality and purpose to ‘literary’ writing, and should not be compared. Reading an essay by Robert Smithson is fundamentally different from looking at a drawing by, say, Philip Roth.

AM: I said, just before this, that art is more national today than ever. The default mode of expressing this ‘nationhood’ is politics, political engagement since we rarely speak of style today, and the politics is the adoption of a style (we should…). Contemporary Pakistani art is political too, in that it often has something to say about an ‘issue’. It might be a matter of personal taste, but I do not relate to this kind of engagement much. I am interested in how art can produce effects that are ultimately political, affective, disturbing, sensuous, cerebral and so on.

TNS: Do you feel that the turbulent situations and violent conditions are addressed as valid concerns or being devices to construct works that can attract outsiders’ attention if not their sympathies?

AM: That’s a leading question. I would say yes, but who is not guilty of this? Some artists from the postcolony tend to see themselves as they are seen by others, and this is a deeply disempowered position, one that is being challenged increasingly. Personally, I would add that the work emerging from these violent places is not violent at all -- if anything it often seems sedated, genteel, expected. Perhaps this is natural. The violence of art is of a different order than the violence of life.

TNS: In your view what are the genuine concerns of an artist working today. Do you think that Pakistani artists have moved away from the past or are they still entangled with issues such as identity, originality etc.?

AM: Well, I don’t see how we can move away from these issues since they still concern us. What we can try is to say something in a way that has a genuine relationship with the past and the future, with identity and originality that says something about these matters in an original way. But I see that in saying this I’ve already used the word ‘genuine’, and can be accused of romanticising authenticity.

TNS: In your work how do you see the link of writing and reading with the practice (or the urge) of making art? Do you believe that one enhances the other, or it works the other way, like one satiates the desire for the other?

AM: The risk -- as you and I know -- is that reading and writing come to replace the making of art to a great extent for some people who straddle these worlds. I see this as dangerous only because I continue to believe that art can say things that are unique to it. It has its own life-world that cannot simply be considered a subset of a larger intellectual project.

But I have a related intuition, which is that art emerges as the product of a ‘form of life’ (to use Wittgenstein’s phrase), as an insight into a world as viewed by an emergent sensibility. It is this insight as well as a constituent of this world, simultaneously or perhaps successively. That is why new ways of living, inhabiting the world, our cities and villages, tend to produce new and exciting art. This art in turn allows the rest of us -- who have not made such a breakthrough ourselves -- to imagine the world differently. Now reading -- or for that matter, watching television and playing video games -- might produce that kind of change too. But I’m not entirely sure.

TNS: What is the meeting ground today for artists living abroad and those living in their homeland?

AM: The meeting ground is perhaps a very real and shared concern about the shape of the world we inhabit today, and the role of art within it. Despite the economic success of some artists in Pakistan and India in the last decade, becoming and staying an artist still requires a relationship with convention that is troubled at best. So when I come home -- which I increasingly do -- I try to meet people who share these idiosyncratic rhythms of work, who deliberately cultivate their approaches to living and thinking.

In these conversations, one is reminded of the possibilities of art, anywhere, as a practice. Duchamp said something like "I prefer breathing to working". It has the whiff of bourgeois snobbery to it, but at the same time it connects living to working, to making art, by assuming a comparison is even possible.

"Art is still entrenched in the economic capitals of the world"