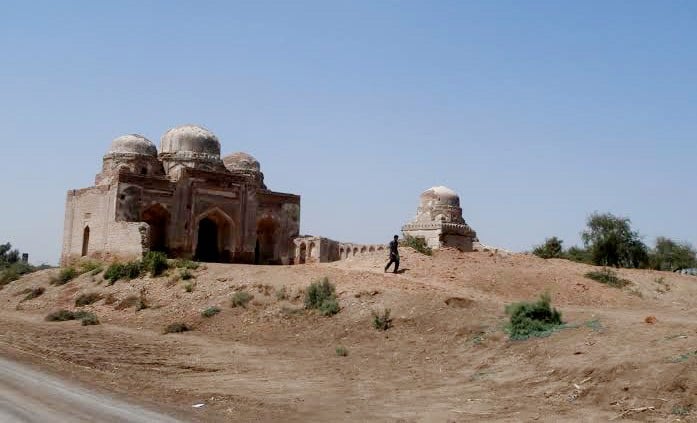 An anthropologist can never be satisfied, unless, of course, she or he disregards the weather, gets out of the home, and searches for something less known of historical or cultural significance.

In one such quest towards end March, the students and faculty members of the Department of Anthropology and Archaeology, University of Sindh, Jamshoro, travelled to Hingorani Maariyon or Dhonra Hingora situated near Tando Fazal about 20km from Hyderabad, Sindh.

Our head of the department, Professor Mukhtiar Kazi, a senior academician and renowned archaeologist of Sindh, had suggested the site.

The road leading to this site is beautiful, dotted with lush green vegetation, mango orchards and vegetable patches and roads intersected by watercourses. Away from the noise of bustling cities, it exudes an aura of peacefulness, calm and serenity.

After travelling for an hour, we saw a majestic albeit ruined domed structure on the western horizon. I instantly knew this was what is left of the once splendid site.

We had to walk on a small earthen path to get close to the domed structures, two of which turned out to be mosques and one a small tomb with a number of mounds of broken pieces of pottery and bricks.

Historical literature suggests that this was once a prosperous agricultural town, built and inhabited by Hingorani Syeds. According to some estimates, it was built in the 18th century during the early years of Kalhora rule (1701-1783) in Sindh. The district Gazetteer of Hyderabad district published in 1920 mentions that the site was attacked and destroyed by the Afghan invader Madad Ali Khan around 1775 AD.

The first structure is a beautiful mosque built on a raised platform along with another smaller domed structure with an open courtyard that served as the entrance. The mosque has three domes, the central one bigger than the surrounding two. It also has three entrances with arched openings. There is a mehrab with Kalma written over it and a large prayer hall in the middle with ornate floral designs.

After travelling for an hour, we saw a majestic albeit ruined domed structure on the western horizon. I instantly knew this was what is left of the once splendid site.

The ceiling of the central dome is drum-shaped with octagonal niches on all sides. There are arched wind catchers that keep the interior cool in summers. The inside of the building used to be painted with multi-coloured glazed floral designs that have faded with time.

The locals venerate the tomb said to be of a wife of a local ruler. Only females are allowed to go inside, so we felt quite privileged to visit the interior. There is a grave inside the tomb covered with a chaddar with some flower wreaths placed over it by the followers. The structure of this tomb is ornate with stone carvings on the ceiling, arched and pointed niches and floral and geometric designs.

The third structure is a small mosque situated on a raised podium almost 30 feet high. Some 17-20 steep steps lead up to the mosque’s main entrance. This mosque is more or less similar in architectural pattern to the one mentioned earlier with the exception of a few unique features. The lower level of the walls is beautifully adorned with large yellowish stone. The decorative design is a little different from the other two structures as it consists of palmette, flowers, zigzags and calligraphy.

In old times, thick walls that have now collapsed surrounded the mosque. There are large arched windows on both sides of the mosque. The wanderers have destroyed the designs by scribbling their names and slogans on domes, walls and facades.

This site has immense potential to develop as an important tourist destination. It is located near Hyderabad, the second largest city of Sindh, and is easily accessible by road. But unfortunately, the concerned officials have left it in a state of sheer oblivion.

The authorities are urged to protect this magnificent piece of architecture of Sindh, otherwise soon there will be nothing remaining of this site. That will be an irrevocable loss of history and heritage of Sindh.