Bangladesh in the fast lane

Reports suggest Bangladesh is moving fast on the road to prosperity. But at what cost? 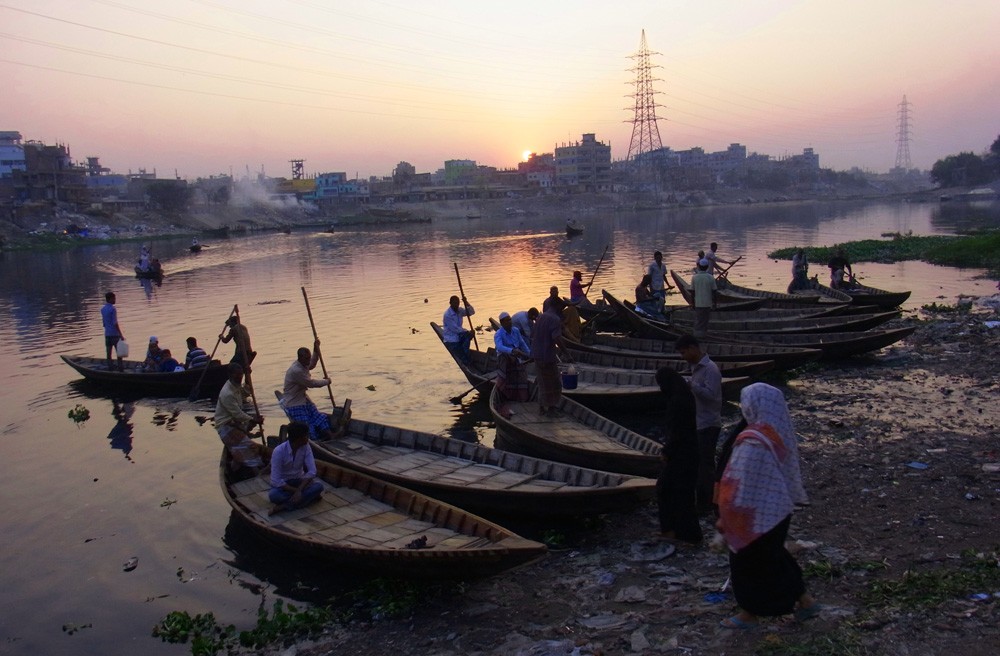 In Bangladesh, the opposition parties have called a general strike. Buses, cars and trucks suggest that the tension between the two "great" women of the country has reached another pitiful pinnacle.

Prime Minister Sheikh Hasina is the chairwoman of her family party, the Awami League (AL) while Khaleda Zia, former prime minister for her family party the Bangladesh Nationalist Party (BNP), leads the opposition from house arrest. For the past 24 years they have alternated between opposition and leadership. Despite the general strike, most shops and institutes remain open, including many owned by the politicians in opposition. The Dhaka Bank owned by Mirza Abbas and Khalek and Hanif, two of the biggest bus enterprises, are only a few examples.

Nevertheless, more than 100 ‘strike breakers’ have been killed since the general strike began on January 5. Everyday arson attacks target bus passengers or truck drivers across the country.

On a night bus journey to Dhaka, I ask my neighbour if he is afraid of a fire bomb. "I think we have other problems at the moment," he answers tensely.

At 120km per hour, the bus driver smiles while speeding along the twisty, potholed country road. Frequently cows, rickshaws and trucks bob up in front of the bus, out of the blue. The driver is smiling maybe because he is blind! The bus helper peeps through the windscreen, nose pressed, warning the driver with a shout about a hindrance on the road. The driver jerks the wheel violently.

This scene, reminiscent of the stagecoach era, symbolises present-day Bangladesh - once the ‘poorhouse’ of Asia is about to overtake many to become one of the world’s leading economies.

In Dhaka, around the port on the black Buriganga river, the economic boom is quite apparent. Rickshaws, carts and porters, hazardously loaded with goods, run like ants from ships to tumbledown factory buildings.

Elsewhere in Dhaka, black smog and white dust pours out of a corrugated iron hut. Inside, plastic and rubber sandals and other cheap goods are being produced. On hills of smoking rubbish, men and women sort paper, plastic and food debris into buckets. "I pay my workers 200 taka for six hours," explains Amith rather proudly while pointing to some people standing close by.

Just about two kilometres away, along the Buriganga river, waste from leather tanneries is turned to fish and poultry feed. The workers here earn up to four times more than almost four million cheap labourers in the textile industry. Some of them have managed to build new concrete houses opposite the tanneries.

The toxic tannery waste flows through the open sewer directly under tea and vegetable stalls. The residents know something is terribly wrong, as at least 160,000 people have fallen victim to this contamination produce.

The toxic tannery waste flows through the open sewer directly under tea and vegetable stalls. The residents know something is terribly wrong, as at least 160,000 people have fallen victim to this contamination produce.

In 2009, the High Court ordered the tanneries that dump 20,000 cubic-metres of toxic waste into the Buriganga river daily to relocate outside Dhaka. But nothing happened even though the AL rules with more than 75 per cent seats in the parliament.

As early as 2000, a report from the German Max Planck Institute mentioned that 14,700 people in Dhaka die due to air pollution every year. Yet, the leather industry has increased its sales by 31 per cent in 2013 and its total value of exports exceeds $30 billion; more than 54 per cent to the European Union.

Despite an economic growth of six per cent in the country, some students I met on the roads do not want to ruin their health for two dollar in any factory because "I want to go abroad," they say almost in a chorus.

Multi-storey buildings and shopping malls are mushrooming in towns and cities of Bangladesh. Most rivers are cesspits and railways are from the British times. The 400,000-some rickshaws jam the roads of Dhaka, even though the city administration has not issued new rickshaw licenses since 1980s. It normally takes two hours to cover 10 kilometres on the road in Dhaka.

Tea stalls of Bangladesh mirror the true economic boom in the country. Some years ago, it was common to take a cookie from the jar to have with tea, but, now, they come wrapped in plastic. Milk for tea is replaced with a sweetened canned milk.

And, in the still agrarian Bangladesh, milk prices have doubled in the last year.

"Sixty per cent of my country’s population is under 25. They are eager to make something out of their lives," says anNGO worker who has visited all 64 districts of Bangladesh. "We have to start to invest in our population and infrastructure. Why aren’t the foreign donors helping us with this?"

To show me how development is in progress, he takes me 30 kilometres northwest of Dhaka to Kushtina to visit two schools. Vast tobacco fields surround the school. Houses in the nearby villages are made of loam. And the dilapidated school building was built in the 1970s. The director of the school says, "To teach children to read and write is not enough anymore. We must prepare them for the IT-world."

At the next school there are four computers for 600 pupils. I visit grades seven to ten. Girls try to communicate with me in English, but quickly revert back to their native language with "oops!" and a giggle.

I am quite amazed at their energy and hunger for knowledge, even when the resources are so limited.

Later, I ask an older teacher, the only one who speaks reasonably good English, if he sees progress in Bangladesh. "Yes, of course. As a boy I had to feel hunger. Today, nearly no one goes hungry to bed in Bangladesh."

Reminiscing about the days gone by, he says as a young man he saw huge fish being caught in the Buriganga river, "but now, our rivers are contaminated. Maybe this is the price we have paid to not feel hungry anymore".

The ride on the night bus back to the Indian border some days later is as bumpy as the one that took me to Dhaka - the driver jerks the wheel violently and his helper warns him of hindrances on the road. At this point I am reminded of the World Bank estimation - that 20,000 people are killed in traffic accidents in Bangladesh every year as opposed to 3,400 in Germany, although Bangladesh has a hundred times less cars than Germany.

Is that another price the country is paying to move fast on the road to prosperity?

Bangladesh in the fast lane