The old fountain from London

The fountain in the heart of Bahawalpur is not an ordinary landmark; it’s a gift from the legendary Queen Victoria to Nawab Sadiq Khan Abbasi 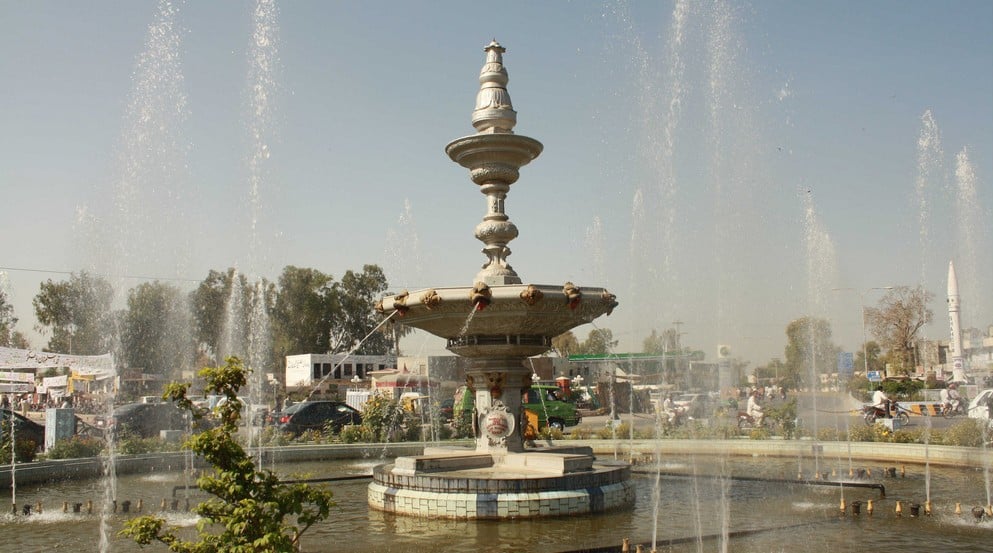 So the story goes that in 1880, Queen Victoria commissioned W.T. Allen and Company in London to construct two exquisite fountains -- one was to be installed near the Buckingham Palace while the other shipped across the oceans to Karachi, from where the delicate fountain was to be transported upcountry to the state of Bahawalpur. It was a gift from the legendary queen to Nawab Sadiq Khan Abbasi IV, the ruler of 17 gun salute state.

The fountain was installed in front of the Sadiqgarh Palace, the royal residence at Dera Nawab Sahib, a few kilometres outside Bahawalpur. It remained there for the next few decades as a symbol of respect for the crown and the nawab of Bahawalpur.

Queen Victoria’s gift was a masterpiece. It had multiple layers where water would fall from top to first to second and finally to last and biggest pool on the ground level.

This was a typical Victorian-era masterpiece with a jet water flow system which was at some point in time changed with modern water pumping system.

A plaque at the fountain’s base reads, "State of Bhawulpur, 1880, Nawab His Highness, Sadik Mahomud Khan" and built by "W.T. Allen and Co, Lambeth Hills, Upper Thames Street, London".

Back then, W.T. Allen and Company was England’s leading manufacturer of ornamental cast iron and metal products, and their products included the Victorian postboxes, ornate lamps at Trafalgar Square - and, of course, decorative fountains.

In 1903, Bahawal Khan Abbasi was installed as the nawab after a four-year regency period under Leopold John Herbert Grey, following the death of Nawab Sadiq Khan IV in 1899. Nawab Abbasi was a benevolent as well as an enterprising soul. He ordered reinstallation of the fountain in the centre of Bahawalpur city, and personally supervised the operation.

This was a typical Victorian-era masterpiece with a jet water flow system which was at some point in time changed with modern water pumping system.

The fountain was inaugrated by none other than Lord Curzon, the Viceroy of India, who was in Bahawalpur to supervise the nawab’s coronation in November of 1903.

For the next century or so, the fountain served the people of Bahawalpur. It was cleaned and run on all state and national occasions. It became one of the city’s main landmarks, popularly called the Fowara Chowk.

I tried to get some more information about the fountain, and turned to friend Dr Raheel Siddique, who is from Bahawalpur and his knowledge of history is far superior. He was doubtful about the fountain being a gift from Queen Victoria but encouraged me to do some more research. I approached various archives and libraries across Britain from Balmoral Castle and Kew Gardens to Royal Archives besides my all time favourite India Office records at British Library.

I even had to write a formal letter of request to Buckingham Palace, as they would not accept emails.

And as expected, information started pouring in. My friend John ‘O’ Brien from India Office Library wrote back to say, "The UK National Archives does have patents registered by W. T. Allen & Company for 1879 and 1880, two of which are for fountains, although this may well be a different fountain to that which was gifted to the Nawab of Bahawalpur. The references are BT 43/47/350840 and BT 43/47/350841".

He also suggested that the gift may be a token of appreciation from the British government for the nawab’s support during the Anglo-Afghan War.

Spiers went on to suggest, "the specific design of the fountain is almost identical to another public fountain in Liverpool, England called the ‘Steble Fountain’. This was cast by W. T. Allen & Co. from a design by Michel Joseph Napoleon Lienard and unveiled in 1879, so it would seem to be a precursor to the Bahawalpur one".

In 2013 some of our Muslim brothers decided to rename the Fowara Chowk to mark the start of a religious movement several decades ago from the same chowk. But, the people for Bahawalpur protested, as they had decades of association with the fountain. The case ended up in a court which decided that the chowk be renamed and the various gargoyles and shapes on the fountain be effaced. The district government, supported by the people of Bahawalpur, is holding ground as of now. However, it remains shrouded in banners of all kinds.

May 2015 and the fountain is still standing majestically. The District Government should fight the case for protection of fountain  in higher courts before it is too late. An option can be while the chowk be renamed, the direction to efface the fountain may be contested. Otherwise the fountain should be carefully shifted to either Noor Mehal or Darbar Mehal as custodians of these buildings may be able to protect this heritage masterpiece. If nothing works, the 135 years old relic can be returned to the givers of the gift and installed in the British High Commission along the statue of Queen Victoria which used to grace The Mall in Rawalpindi for decades. The damaged statue was also shifted to the embassy from a junk yard in Rawalpindi some years back. Perhaps heritage is not our priority.

The old fountain from London