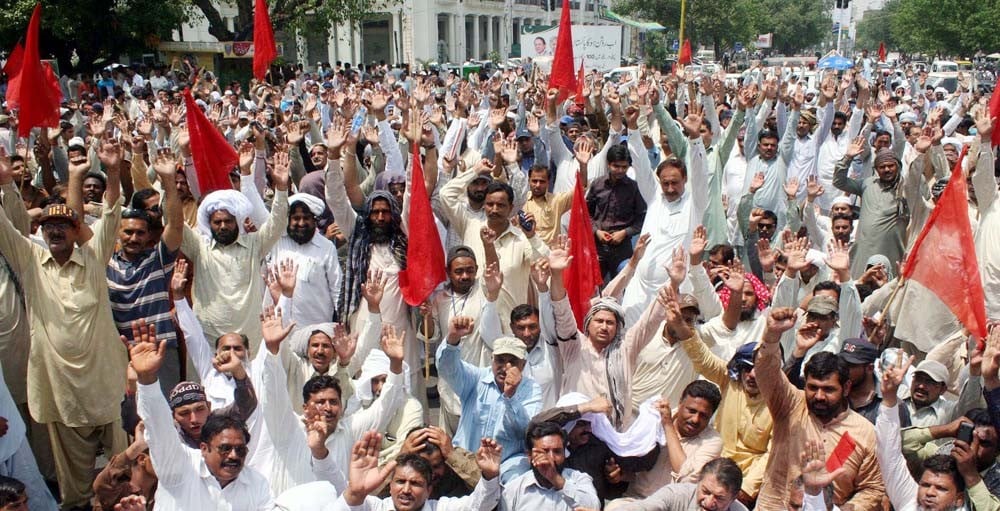 Last week a large number of workers gathered at the Chairing Cross on The Mall, Lahore, under the banner of Wapda Hydroelectric Workers’ Union. They had come there to protest against the proposed privatisation of power distribution companies namely Lesco, Fesco, Iesco and Gepco. The non-violent protestors spent the whole day there chanting slogans against the proposed privatisation plan.

As they were disbursing after the sit-in, they came to know that 18 of their union leaders had been booked in an FIR under Sections 188, 290 and 291 of the Pakistan Penal Code (PPC). They were declared guilty of defying an order promulgated by a public servant and causing public nuisance by blocking the road.

So far no arrests have been made but the union leaders are not taking things easy. They know the FIR is like a sword hanging over their heads and can be used anytime to victimise them. However, despite this looming threat, the union has announced strikes in different cities and started with Lesco in Lahore where the staff stayed away from work for four days.

"We will continue our struggle as we know our survival lies in it. If we get intimidated by coercive measures of the state we do not deserve to represent the workers’ community," says Osama Tariq, joint additional general secretary of the union, while talking to TNS. He believes there is no justification in privatising entities that are running in profit and vows to go to any extent to oppose this move. The union has announced strike in Faisalabad tomorrow, May 18 and it is quite likely that there is a crackdown against its leaders, he adds.

While the process is in the consultation phase and the government is working on a privatisation scheme for these entities, one wonders what can be the role of a union which has not even been consulted. Does that mean the trade unions have lost their influence and the ones which try to resist are victimised?

A look into the history shows that Pakistan is one of those countries where labour organisations have reduced over the last couple of decades. Total workforce at the moment in Pakistan is around 60 million and according to estimates only around one per cent of the total workforce is organised in trade unions. In private sector, most of the trade unions are organised at factory or unit level while in public sector most are organised at national level or institutional level.

Normal practice is that employers register two unions so that the third union registration becomes very difficult. According to the law for registering a third union in any establishment, the union needs to prove that it has membership of over 25 per cent of the total workers.

After the partition of sub-continent, the only strong trade union that came into Pakistan’s share was of Railways. Pakistan did not have many heavy industries at that time where trade union could have flourished. The country saw a very strong trade union movement in late 60s and early 70s. That was the time when trade unions and left-wing political parties were flourishing in many countries in the world. This global situation helped trade unions in Pakistan politically and they started organising in both public and private sector.

Khalid Mahmood, Director Labour Education Foundation (LEF) -- a non-profit organisation working with trade unions -- states that decay of trade unions started during the last years of Zulfikar Ali Bhutto. By that time divisions in trade unions had started and soon different factions were fighting for control. And under Zia’s dictatorship, he says, trade union was crushed just like other democratic institutions.

Khursheed Ahmed, Secretary General of Wapda Hydroelectric Union, who has also been booked in the above-mentioned FIR, condemns the government for keeping workers out and taking unilateral decisions. He tells TNS that they had to come out on roads when they were denied the opportunity to sit in consultations and give their input. Ahmed says registration of criminal case is the first step and there can be many other coercive measures to stop them from demanding. How can the government absolve itself of its responsibility to provide basic necessities of life to the people? he questions.

The LEF director tells TNS that there are some examples of trade union resistance against the government policies and employers but no effective solidarity was shown from other trade unions in these cases. For example, he says, during the privatisation of PTCL and KESC or in case of repression of power loom workers in Faisalabad.

Nadra union, however, is a success story and one reason for this is that it comprises a large number of young activists. The union launched a three to four years’ continuous struggle before going for a week-long nationwide strike for their main demand of permanent jobs which was fulfilled. This shows that organising young blood in trade unions is very important and it brings new energy and healthy traditions to trade unions, says Mahmood.

On victimisation of trade unions, Farooq Tariq, Secretary General Awami Workers Party (AWP), says while dealing with labour rights, bosses have always relied on the institutions of the state, including Labour Department, police and the army. "The most common method of victimisation of union activists is job termination. There is no tradition of job contracts. All is done by word of mouth. You get a job and you lose it, all by one sentence of the bosses, especially in the private sector."

Tariq says it seems police have been given special instructions to crush labour leaders opposing privatisation. "Everybody knows that privatisation on behest of IMF is the most repressive action of the PML-N government against the working class of Pakistan. It is part of their neo-liberal agenda." He shares the example of Sri Lanka where the government’s plan to privatise electricity distribution failed miserably and hopes the Pakistani government learns a lesson from it.

Tariq tells TNS police have registered at least 12 cases against workers under anti-terrorism laws. Long term jail sentences were awarded to trade union activists in Faisalabad just for assembling and demanding a raise in workers’ wages, he concludes.

Mahmood points out that another important factor is registering of fake unions by employers themselves. In private industry, this practice is very common. Normal practice is that employers register two unions so that the third union registration becomes very difficult. According to the law for registering a third union in any establishment, the union needs to prove that it has membership of over 25 per cent of the total workers. This is an impossible task for an independent union to achieve in a repressive environment.

While registering a union, he says, the Labour Department has to ask the employers about union members whether they are workers in that particular establishment. When employers come to know that their workers are registering a union, they often adopt repressive tools and in most of the cases the workers are sacked immediately. This makes very difficult for unions to be registered and trade unionism to flourish, he concludes.