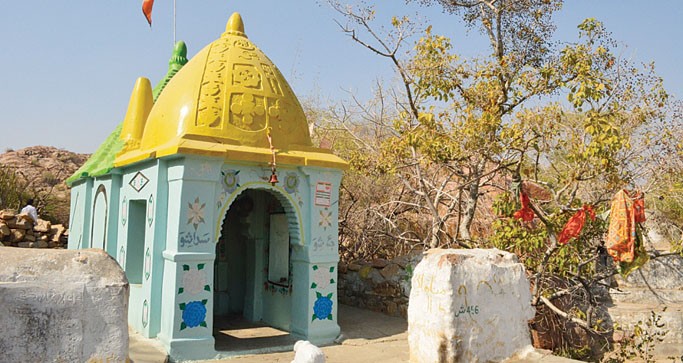 Ashok Kumar and his brother Munish were carrying their elderly father Kirta Ram in a hammock through the bumpy dry bed of seasonal stream, locally known as Sardharo, that runs parallel to the Karoonjhar hills. Their destination was Sardharo Temple, the centuries-old sacred Hindu temple on the hilltop, to fulfill the last wish of their elderly father to participate in the three-day annual fair.

This festival is said to be the most important religious gathering for Pakistani Hindus.

The temple is located in the Karoonjhar hills in the Thar desert, along the Indian border in Sindh. It is some 150 kilometres south of the Tharparkar district’s headquarter town of Mithi or around 460 kilometres to the east of the country’s mega city of Karachi.

Every year in spring thousands of Hindu pilgrims from all over Sindh travel to the temple to perform their religious rites, where they dance, dine and sing religious hymns.

"Hindus cremate their loved ones after death. And the ashes may be immersed in River Indus or River Ganges or here in the waters flowing from the rocks of Karoonjhar hills. So imagine the importance of this temple," says 45-year-old Mohan Lal who came to visit the temple from a remote town of Sindh.

Sindh is home to the largest number of Hindus living in Pakistan.

At Sardharo temple, the most sacred religious place for Hindus of Pakistan, facilities are sparse. Although some years back, a road was constructed to connect the temple and the nearby town of Nagarparkar,  around two kilometres road is still to be built.

"The Hindu pilgrims including children, women and elderly people have to walk through wild growth and bumpy river bed to reach the temple," says Ashok Kumar who is accompanying his father. There is no resting point on the way and no provision of water. People who walk to the temple risk snakebites as well.

Half of Tharparkar’s population is Hindu. Thar is the only place in Pakistan where around a dozen centuries-old Jain temples are located -- and all are neglected. Jains are no more seen in the country.

Thar has been suffering from severe drought for the last two and a half years and a large number of children under five have died due to starvation. According to locals, majority of these drought victims were Hindus.

After the slow response by the Pakistan People’s Party (PPP) led Sindh government, the religious extremists have started relief operations in Thar which is rich in minerals and where the country’s largest coal reservoirs of 2.7 billion tonnes are located.

"We have to fetch water from far flung areas as the only well near the temple is almost dry due to lack of rains," says Saghram Das, a worker at the temple.

Water has a central place in most Hindu rituals. But since the pond at Sardharo temple has almost dried, Hindus are unable to carry out their rituals during religious gatherings.

Many centuries ago when Thar Desert was a sea, a Hindu deity Rishi Parasara selected this peaceful place among the mountains for his long worship that was spread over hundreds of years for the sake of eternity. But as the myth goes, finally he lost his invocation as he had sex with his own daughter and thus the sea dried up. The Sardharo river which was named after the Hindu sadhus (holy men), who bathed in the river, was thought to be a permanent river. But with the passage of time the river dried up. The Hindus believe that it went dry because of the sins of the humans.

"Thousands of families come here for the annual religious gathering where there is no proper arrangement of light, water and accommodation. We have repeatedly requested the government authorities but our requests are yet to be heard," says an elderly caretaker of the temple.

However, the government authorities’ response was quite strange. "I am not aware of these issues. We have not received any complaints, otherwise we will obviously do something," says Dr Mahesh Kumar Malani, a PPP MPA who is himself a Hindu and belongs to Thar.