It’s not the be-all and end-all

We lack a match-winning bowler 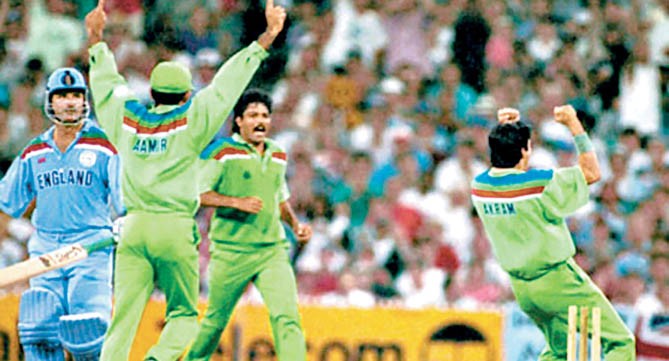 The build up to Pakistan’s World Cup campaign has been rather clumsy and the recent injury to Mohammad Hafeez tells us that all is not well in the camp, at least in terms of knowing what our playing eleven will be. Yes, many of us are excited about the 15th February clash with the arch-rivals and have already gone on to state, failing to control our emotions, "World Cup jeetein ya na jeetein, India se na haarein".

By no stretch of imagination will this match decide the fate of either team in the World Cup. We shall worry about our own team and its chances in the World Cup and at the outset I intend to dismiss any comparisons being made with the present team to the World Cup winning side in 1992. For starters, one may consider that cricket has considerably changed, the advent of T20 cricket has changed the pace of the game, and targets of above 300 are now considered chaseable.

Additionally, the team of ‘92 had genuine and proven match winners accompanied by a bunch of youngsters under the wings of Miandad and Imran Khan. That was a different class of cricketers with a completely different mindset and approach to the game. It would not be fair to compare the current team with the team of ‘92 and impose unnecessary pressure on them.

The current setup has a captain who in spite of being labeled ‘tuk tuk’ is no less than Imran in terms of success. Although defensive, his methods have proven to be fruitful for an otherwise crumbling team. In 2013, Pakistan won seven series under Misbah which in itself is quite an accomplishment and speaks volumes about the responsible nature and commitment of Misbah.

Our main batsman Younis Khan has been failing miserably. I would like to remind everyone that although Younis made a swashbuckling comeback in the Test series against Australia and followed it up with an impressive Test series against the Kiwis, his achievements in the shorter version of the game remain questionable.

Nonetheless, he is one of our most experienced campaigners and his presence in the team is essential if we are to do something big at the World Cup.

The two warm-up games showed there is hope. One must take into account that the kind of player Younis is, it takes a bit of time for him to adjust to the varied bounce in countries like Australia and New Zealand.

The fact that he is mostly a front foot player and needs time to adjust, he makes the swing also look ominous although the ball may be doing what it normally does on hard Australian wickets.

I feel as the tournament goes on, Younis will overcome this shortcoming by adjusting his game which he is capable of as he generally adapts well to situations thrown at him.

Pakistan’s opening woes continue. We have not been able to find a successful opening pair since Aamir Sohail and Saeed Anwar set the bench mark in the mid ‘90s. Hafeez has opened for Pakistan since his debut, but has only succeeded in establishing himself as a flat-track bully, who fails even if the ball swings very little.

Thus, his injury has come as a blessing in disguise for a team that has not been helped by Hafeez’s technical shortcomings. Many will argue that he has been Pakistan’s most successful run getter in the previous years but one must also consider that those runs have been scored on Pakistan’s makeshift home ground, the UAE, which has nothing more to serve than placid batting tracks.

In my opinion, Hafeez -- given that he cannot bowl -- would have spoiled the balance of the team. His frequent failures as opener don’t allow the Pakistan team to find a pair of genuine openers to once and for all fill the void. The fact that a solid middle order in the form Younis, Misbah and Umar Akmal is for now good enough to tackle any early mishaps which Pakistan is accustomed to.

I have always believed that if the top five batsmen cannot perform, there is no point in playing a sixth batsman who will never be able to single-handedly provide stability. In any event, Afridi takes the cake for the perfect number six batsman as he bats before Sarfraz.

Although it is usually the other way around, right now in the current setup what we lack is a match-winning bowler.

Afridi and Irfan are the team’s strike bowlers with Wahab, Sohail Khan and the new leggie providing support.

It will not be fair to compare Yasir with Mushtaq Ahmed, as they are different bowlers. It would be fair to conclude that Pakistan have always won major tournaments when they have been on the losing end from the beginning -- the 1992 World Cup and the 2009 World T20. So let’s not lose all hope if all doesn’t go well against India.

It’s not the be-all and end-all