A basic circle of life

In Shanghai’s Rockbund Art Museum, a unique installation of clowns who are not clowning around 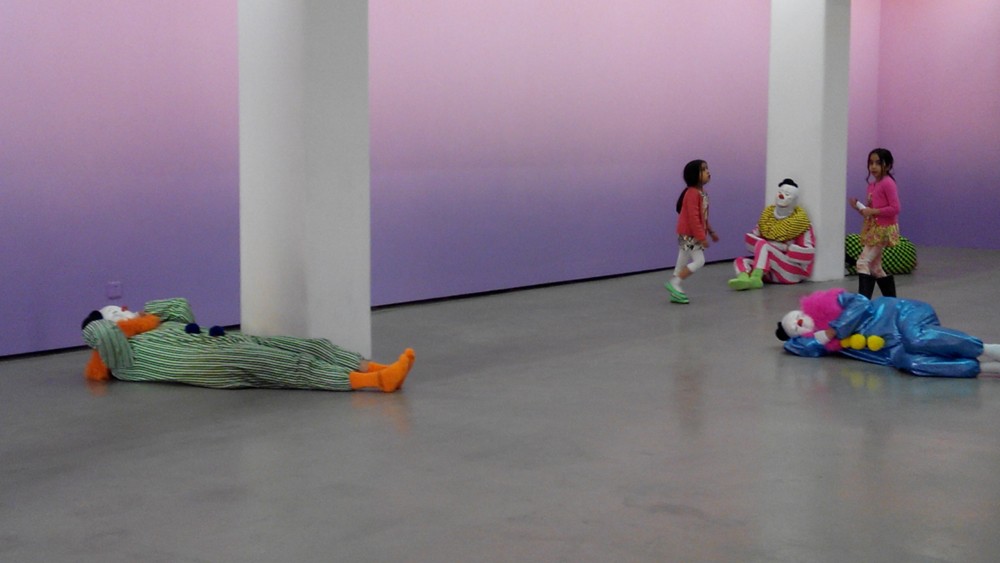 While walking up the stairs of the first floor of Shanghai’s Rockbund Art Museum (RAM), I and my two young granddaughters come upon a clown wearing a white mask, white gloves, and a bright frilly costume, lying still on the floor of the corridor on the first floor of the RAM, with a coloured glow all around. Not sure if it is a dummy or a real person, we stand next to him (or is it a female?) watching expectantly for ‘it’ to show a sign. The next moment the children exclaim that the clown is breathing and alive!

We then turn our backs towards him and enter the large hall where at least eight more clowns in different and spectacularly outlandish combinations of colours are either asleep on the bare floor or sitting still, relaxing against the columns of the gallery. There is absolute tranquillity and dreaminess all around, and as we climb more floors, we discover more clowns in repose, on each of the five floors -- 40 in all, either lying down, sitting, or sometimes fast asleep, defying the obligation to perform.

This is a unique installation of non-smiling, passive, lethargic and melancholic clowns who are not clowning around. They seem to be in isolation -- quite the opposite of what they are expected to be. Even the eyes on each face mask are fixed, preventing them from communicating any expression whatsoever.

This is the work of a mixed media artist, the Swiss-born Ugo Rondinone, who has been living in New York since 1997, and who explores various themes of fantasy and desire, exhibiting his works since 1985.

The artist has transformed the regular white walls of the RAM for his solo show, using concentric circles of blurred colours and plastic filters placed over the museum’s windows, therefore, the light coming in, as well as the floor to ceiling sprayed-on "horizon paintings" makes the visitor feel the warmth of the psychedelic rainbow colours.

RAM has no permanent collection, so it’s not really a museum in the traditional sense but it hosts impressive contemporary shows, of which I have seen a couple on my previous visits to the city.

The exhibition is layered in groups; beginning with a rainbow sign, the coloured filters, the horizon paintings, which define the space, the mandalas, and the sleeping clowns, much like a colourful symphony. Rondinone has made all the clown costumes himself too.

The show is titled, ‘Breathe, Walk, Die’. It opened in September 2014 and will continue until January, 2015. Larys Frogier, curator, critic and art historian, who is also the director of the RAM, has curated it.

‘Breathe, Walk, Die’, each of the three words has a present tense title, from sleep to wake to rise. The exhibition is simply about existence instead of being busy, as the clowns don’t entertain.

The artist has said in an interview that "you don’t have to understand an artwork. You have just to feel it. In my work I use very basic raw symbols, something that everybody can relate to, from a child to an old person, from the East to the West," adding that it (Breathe, Walk, Die) is "just a very basic circle of life."

In some ways, the un-performing clowns are not only mysterious but also a bit worrisome, especially for children. However, in this stunning show, the entire ensemble of works, the verticality of the architecture of the building, the actors who pose as the passive clowns and the visitors, get fully involved.

Childish yet fantastic and surreal, the "non-action" of the performers has many layers and philosophical interpretations. For example, this strong visual and emotional experience seems to point out a raw reality that we are no longer capable of seeing the apparent symbiosis of misery and spectacle; the evidence of other’s pain. We watch it or pass by, without showing any compassion or stopping to ask any sympathetic questions of these living, breathing, but terribly sad-looking individuals!

A basic circle of life