There are noticeable opportunities for students to work on campus in the city. The idea is to create help in terms of finances and also afford a taste of practical life 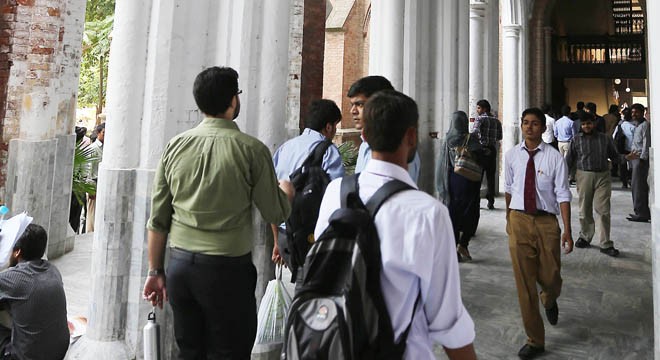 The phrase ‘student job’ has seen an increasing use over the years, especially by the top-ranking universities around the city. But the issue of whether there is sufficient provision or if it is a cause worth pushing for remains unresolved.

The prevalence of both on- and off-campus student jobs, along with the factors that prevent the students from working and studying simultaneously, need to be considered. Also, why there is an increasing need for them.

At LUMS, for instance, apart from becoming a teacher’s assistant (TA) with a per-semester pay, students in later years of their degrees charge a certain fee for writing final papers for other pupils. But as for taking part in social welfare programmes or becoming a debates/dramatics coach, they are not paid; they only receive certificates for their efforts which obviously helps them to build their CV.

On the other hand, projects such as the National Outreach Program (NOP) bring people from the underdeveloped areas of Pakistan, coach them for LUMS-specific tests (LCAT and SSE) and give a stipend to those who get admission at the institution.

Aside from the students becoming TAs (which either pays them an amount equal to one course or simply reduces the fee by that amount, according to how the students will), graduates of LSE can also opt for being teachers’ associates that pays them significantly better.

Also, programmes such as the AIESEC (a French acronym for Association internationale des étudiants en sciences économiques et commerciales) send selective pupils abroad to study a course of their choice, and finance a major part of their trip as well.

With an earning by means of small businesses or paid work, putting their efforts into social welfare programmes or interning at a company, the drive to be in the same league as others surges.

However, at PIFD, Kinnaird and LMDC, such monetary incentives are absent. While PIFD offers on-campus jobs as teachers or coordinators without pay, LMDC only sponsors students for unpaid internships that include observing doctors’ work (a case that is rare since the professionals are usually uncomfortable with people watching them work); and the BSD students are allowed to practically work on patients in the third year of their degree.

At Kinnaird, teachers offer selective students certain part-time jobs or internships but such cases are rare and there is usually no incentive involved. They also have the opportunity to organise events on campus but such efforts are only voluntary.

Although the prospects of students working on-campus seem bright on paper, in reality, they make up only a fraction of the student population since such work often asks them to fulfill a certain academic requirement.

Most individuals are unable to get paid opportunities resulting in several students at different universities freelancing or running small businesses. Examples include a senior student at LSE having his own café called The Hunger Games right next to the institution, another couple of senior students having their own clothing-line named ‘De Novo’, and students at LUMS freelance-writing for magazines or online at websites such as.

At FAST, as one individual observed, a number of students have "side businesses" (mostly IT-oriented) through which they earn handsomely. Notably, perhaps, there is awareness amongst the administration of these institutions regarding students having off-campus work: they allow their pupils to advertise/promote their ventures around the campus.

The fact remains that students both want and need jobs. They desire to utilise their time and energy on such preoccupations merely to have something productive to do on their hands. As the world continues to move forward at a rapid speed and every one is trying to get ahead by making the most of their time and resources, one cannot help but feel they are lagging behind. With an earning by means of small businesses or paid work, putting their efforts into social welfare programmes or interning at a company, the drive to be in the same league as others surges.

Equally importantly, the ‘evolved’ social scenario of today’s generation gives root to a persistent need of daily finances. Teenagers, especially, require at least a small amount of cash every other day in order to keep their social life active and functioning: the number of outings (lunches, dinners, birthday parties) along with the need to satisfy personal wants (including accessories such as clothes, make-up and gadgets) is on the rise, all of which require money -- students’ incentive to not only intern but also receive a regular pay is today perhaps higher than it ever was.

Nevertheless, despite an apparent need and modest availability of student jobs, why there is no popular trend for the cause has several reasons.

Firstly, considering the work-load that students have from their universities gives them very little extra time to dive into even part-time work. Their timings do not allow them to flex their schedule either. The existence of evening classes is mostly for people acquiring MPhil or PhD degrees.

Secondly, tasks such as waiting tables, managing accounts and delivering food to peoples’ houses are usually seen as socially embarrassing regardless of how much they pay; no individual studying at a prestigious university would opt for such a job.

Specifically for the girl lot, the prospects of putting supplementary hours into a job along with studies seem less probable due to the disapproving attitude towards females who spend too much time outdoors.

These factors lead to the student-population not accepting jobs (as many would not be aware) at chains including McDonald’s, KFC and Pizza Hut that offer anyone capable of working efficiently both full-time and part-time jobs. In fact, McDonald’s once offered a slot for a late-night shift for book-keeping, paying up to Rs40,000. Even call centres seek people who are in the midst of their academic years and pay them sufficiently.

The entire debate about the dynamics of student jobs boils down to what will the availability of jobs for students do for them. We need to realise that the first job experience that individuals get is either after their Bachelor’s or Master’s degree. And so, essentially, student jobs intend to achieve certain aims at an earlier stage in life: instill a sense of responsibility within individuals, aid them monetarily (whether it is to earn extra for lacking day-to-day finances or due to poor domestic financial conditions) which therefore also create a sense of managing finances, give them a peek into the practical world and, as mentioned earlier, channel their extra time and energy on something productive.

Specifically with reference to on-campus jobs, not only can students get extra credit for the work they do but they are also better able to relate with their teachers, thereby encouraging a smoother running of all departments and improving student-teacher relations.

For women, as one student from Kinnaird stated, since job opportunities in all fields are "already restricted," on-campus opportunities are extremely helpful in boosting careers and motivating them to pursue higher degrees. This makes them realise their worth and puts their ambitions to the test.

Truly, there is a notable availability of opportunities around the city -- although demand for more would endure keeping in mind the enormity of the student population -- the problem does not lie within the lack of student jobs but the slow-paced cultural and societal-norm change that needs to be catalysed in order to promote the scope for working students.