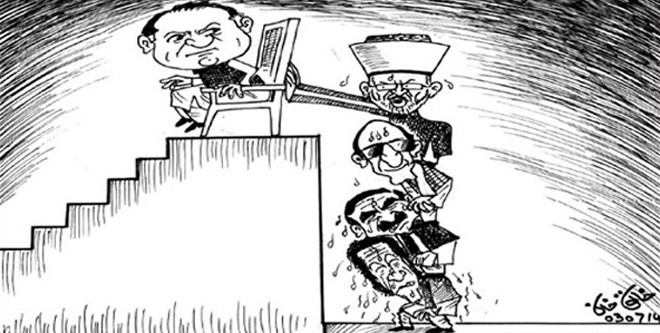 Dr Tahirul Qadri abhors the existing democratic system. Qadri earlier issued a call for revolution, but now appears vague about what he really wants. However, in a television show, Ahmed Raza Khan Kasuri revealed that a 6-member committee was liaising between Qadri and General (retd) Pervez Musharraf.

Kasuri claimed that he was one of the strategists who will assist Qadri in bringing about the revolution. He said that Qadri will be the "Rahbar" (leader) of the revolution and will oversee the functioning of the revolutionary government put in place after the ouster of the incumbent government and the wrapping up of the current political system. One wonders if Qadri is just a maverick or a cog in a wider power play! However, his return to Pakistan at this particular time lends fuel to some conspiracy theories.

This explains why those who were with Musharraf swiftly jumped on Qadri’s bandwagon. The list included: Chaudhry brothers of Gujrat, lone ranger Sheikh Rashid Ahmed, Ahmed Raza Khan Kasuri and the likes. Poet and author Harris Khalique has termed this change "a transition from enlightened moderation to counter-enlightenment." He asks: "Why weren’t these revolutionary changes brought about when Pervaiz Elahi was the chief minister and Shujaat Hussain the real power broker under Musharraf? What pro-poor economic policies did Musharraf pursue during his nine years?"

The All-Parties Conference (APC), recently hosted by Dr Qadri, conveniently skipped his earlier aggressively-peddled demand pertaining to Prime Minister Nawaz Sharif’s removal for "sponsoring" June 17 Lahore killings. Instead, the APC’s 5-point joint communiqué confined the call to Punjab Chief Minister Shahbaz Sharif’s resignation apart from dismissal of some provincial ministers and senior police/administrative officers "involved" in the disaster. The APC declaration said that if Shahbaz Sahrif did not quit then President Mamnoon Hussain should sack him. However, the Constitution does not provide for such a step; while the president has no powers to dismiss a chief minister.

The Qadri-convened APC also wanted formation of a 3-member Supreme Court commission to inquire into the killings. However, under the law, the apex court can’t do this on its own although it can take suo moto notice of the incident. Only the federal government can request the court to constitute an inquiry commission, which submits its non-binding report to it.

The country has a vast reservoir of political orphans who are always ready to back any pretender. There are also political parties who are desperately trying to use the opportunity to raise their own stakes.

This speaks volumes about the knowledge of the APC participants. In addition to the PML-Q, Sheikh Rashid’s Awami Muslim League, Pervez Musharraf’s All-Pkistan Muslim League attended this moot, while the PTI, the JI and the MQM showed up at it through their representatives only to express solidarity with the PAT over the Model Town killings and nothing more. While, PPP, ANP, JUI-S and JUI-F had announced not to attend this APC.

The country has a vast reservoir of political orphans, mostly associates of past undemocratic regimes, who are always ready to back any pretender. There are also political parties who are desperately trying to use the opportunity to raise their own stakes. And the Qadri agenda is perfect for those who profess themselves politicians but can only gain power when they have powerful patrons. However, one needs to remind these elements that the growth and success of democracy hinges on the continuity of this system uninterruptedly, without its derailment by some impatient strongman. Only villains of democracy can support a change through unconstitutional means and serve under the powerful establishment.

Since Qadri’s support is largely a personality cult and sect-based, therefore, he does not have the kind of mass support that could present any serious challenge to the present system. A master in media-manipulation, Qadri has created for himself some nuisance value largely because of publicity and propaganda that he has been able to buy with the large financial resources that he seems to command.

Recently, to get favourable coverage for Qadri’s arrival in Pakistan to launch his self-proclaimed "green revolution," Qadri’s PAT paid for the two-way travel from London to Islamabad via Dubai of 12-13 Pakistani journalists and booked them all on the Emirates flight that Qadri was travelling on. These journalists were carefully vetted and issued air tickets and travel expenses, costing an estimated £1,200 per head, in a clandestine manner. The air tickets were booked in London through a body of Pakistani journalists, who had promised "positive" and "praiseworthy" coverage to Qadri and had entered into agreements with the PAT’s UK leaders that they will not report anything that goes "against" the PAT.

In a despatch from London in the The News (July 27), Murtaza Ali Shah wrote: "It is unclear whether TUQ (Tahirul Qadri) was aware of what some of his advisors in the party did in an attempt to buy media favours. However, the media savvy PAT chief did emotively stress after leaving the stranded plane at Lahore airport on June 23that electronic and print media people were his "Harawal Dasta" -- the frontline soldiers or backbone of his revolutionary plans."

According to Murtaza Shah, Minhaj-ul-Quran International’s senior UK representative Dawood Hussain Mash’hadi used at least three media persons as front men to run the operation of picking-up the journalists, using a body of Pakistani journalists as the cover to issue the tickets and to gain pledges. A PAT source in London told Shah, on condition of anonymity, that the funds for tickets to journalists were provided by a Norwegian Pakistani businessman who was once linked with the PML-N.

That explains why the media team that accompanied TUQ did not report anything on how the passengers protested while they were kept in hostage-like situation when their exit was blocked by the PAT men, ignoring their pleas to leave the plane. However, at least two private TV stations did show footage of passengers expressing their anger at the airport lounge. The angry passengers were heard shouting "shame, shame, shame…"

The recent events, especially ransacking of Islamabad’s Koral Police Station, have shown that PAT is not as non-violent an organisation as it claims to be. The PAT workers arrested by the Islamabad police were reportedly carrying rocks in their laptop bags.

Both Altaf Hussain and Tahirul Qadri enjoy absolute control over their workers. Qadri launched his first assault on Islamabad on January 14, 2013, ostensibly to demolish the nascent democratic dispensation as it held no chance for persons like him to ever get elected into power. However, despite a 5-day sit in, Qadri failed in his attempt and ended in seeking a face-saving exit.

He launched his second attack on June 23, this year. However, Pakistani media started publicising Qadri’s planned assault days before the actual date of his move; while on June 23 all TV channels made special arrangements for the coverage of Qadri’s arrival and then continued covering subsequent developments. Instead of depriving Qadri of the media oxygen that sustained him, the government contrived to turn him and his party into defiant heroes. This shows the inefficiency of the media managers of the incumbent government.

But, it is hardly the make-up of a revolutionary leader to travel first class and then call for the overthrow of a ‘representative order.’ In fact, Qadri is a punishment inflicted upon the political rulers for keeping Musharraf in the country.