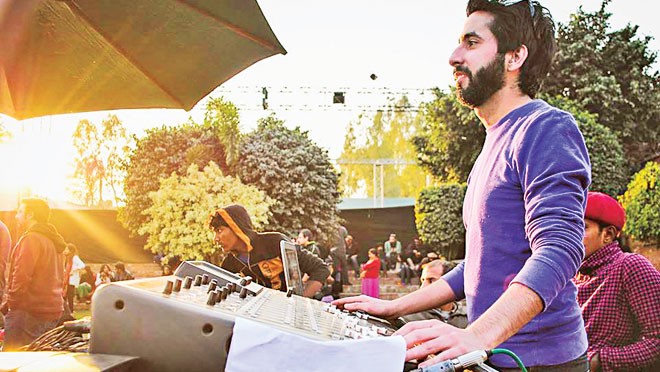 Writers, such as myself, tend to indulge in narcissism, so the readers must suffer along.

In the context of music, it is nearly impossible to name every artist, because the indie/alternative scene is growing and it is a great time to be a curious fan.

Contrary to popular opinion, Indian music has moved beyond Bollywood. There is a market for Atif Aslam’s music, but there’s also a market for Mekaal Hasan Band, Zeb and Haniya as well as emerging electronic and indie musicians. This brings us to present-day musical happenings.

Rushk is back, with a new and improved lineup, and new music. After releasing ‘Tujhay Patta’ as their first single as a collective, this unit has announced its second single called ‘Mera Naam’. The music video, produced and cut by Rola, is the band’s first performance-based video and is currently in post-production. Lead singer Tara Mahmood is not a one-hit wonder and ‘Mera Naam’ is, in a word, captivating.

In an email conversation, Tara Mahmood confessed that the shoot was “absolutely nerve-wrecking” and “exciting”. Describing the mood, Tara wrote, “Band members had their best game face on, positive vibes and lots of patience. It really felt like we were making something happen. Let’s hope it is well-received.”

Rushk’s keeping up with the times, and every single is accompanied with gorgeous artwork, designed by Safwat Saleem. The artwork of singles ‘Tujhay Patta’ and ‘Mera Naam’ showcases his remarkable talent.

Mekaal Hasan Band is aiming to release its album by the end of summer. Mekaal Hasan has roped in Karachi-based artist Samya Arif – a singular force behind some of the most stunning artwork from Karachi’s indie music scene, hint: Forever South (FXS) – for the digital artwork of this new album.

Zoe Viccaji had her first show in Mumbai. During a quick Facebook conversation (read: mild stalking on my part), Zoe revealed that it was a small, intimate performance and it went well. Zoe Viccaji’s debut album is being released by Universal India. It will be released in Pakistan and India by July-August.

In other news, Jamal Rahman of True Brew Records is another music producer (the real kind) promising some musical goods. In an email conversation, Jamal revealed that he’s currently working on the sound design and soundtrack of Manto, an upcoming film on the Urdu literary giant.

“We’re working full time to get the score and sound design finished for the Manto movie. The music videos are meant as promotional material for the score, for which Zeb, Ali, Javed Bashir and Meesha have lent their vocals. These probably aren’t going to be out too soon since the film is still in post-production," explained Jamal.

Jamal is, for now, completely focused on the Manto soundtrack: "True Brew Records’ own projects are on hold until the sound for the film gets done, which I’m hoping will by mid-June, but we do have some interesting things lined up for the summer."

Those "interesting things" demand attention because this is the experimental indie-alternative side that makes music worth exploring.

"Red Blood Cat’s debut EP should be out this summer (album’s being mixed and mastered these days), videos from Storm in a Teacup and our Live at True Brew series should finally be seeing light of day, work has begun on Arieb Azhar’s new material of which two tracks are near completion, and we’ll be debuting some of our own tracks."

That is a lot of music. Is Manto going to be the record of the year? Place your bets.

In emerging acts, Red Blood Cat is right up there, top slot.

Stalk them on Twitter and you will find a connection to Poor Rich Boy(s), who by the way, are playing in the United States. Their performance at the Kennedy Center is so, so good, you may as well download it and keep it as a collector’s edition.

Basically, exercise some patience, support local bands by going to their DIY concerts, and you will, in all probability, be rewarded with good, quality music.

Note from the author: Keep watching this space for more news from the indie and alternative scene. Until then, goodnight and good luck.

Maheen Sabeeh is a former staff member. She tweets @maheensbh