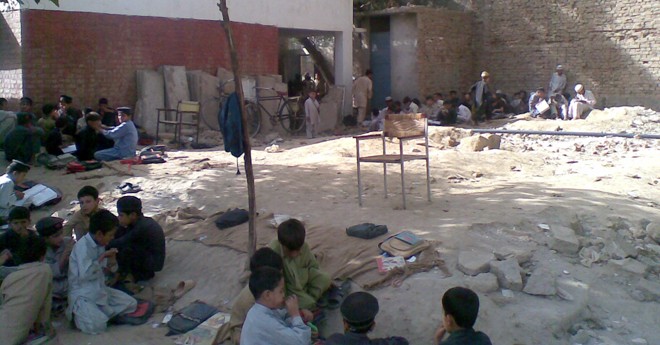 The Khyber-Pakhtunkhwa government has launched an Independent Monitoring Unit (IMU) to improve attendance and performance of teachers and education administrators in the province. The IMU has been established under a three-year project funded by the UK’s Department for International Development. Rs500 million have been allocated for the initiative this year and more funds will be set aside for it in the next budget(s). The project will be extended if found useful after a third-party verification. Rs100 million have also been earmarked for establishing a third-party monitoring mechanism.

Muhammad Atif Khan, Provincial Minister for Elementary and Secondary Education (E&SE) Department, says 475 IMU monitors -- 303 men and 172 women -- have been appointed on merit for boys and girls schools respectively. They receive a fixed pay of Rs30,000 a month. Male monitors have been given motorcycles with Rs10,000 fuel allowance.

Each KP district has been divided in groups, each consisting of up to 60 schools and every monitor is responsible for visiting all the schools in his group. He/she has to visit a school at least once a month.

On the terms of references (ToRs) and standard operating procedure (SoP) of monitors, the minister says they are basically real-time data collectors and transmitters. "They have been trained for the purpose. They will collect, physically verify and send immediately data on the attendance of teachers, enrolment/dropout rate of students, needs and deficiencies of teachers and other school paraphernalia etc."

The monitors will also collect data on the inspection of officers to schools, the distribution of free textbooks, stipends to the female students and the parents-teachers’ council (PTC) and other school funds. He says monitors have been given smart-phones with a proper format for feeding data and a general packet radio system (GPRS) to collect and transmit real-time data of/from the concerned schools to the IMU head office in Peshawar.

Asked what measures have been taken to guard against the misuse of powers by monitors, Khan says, "The monitors have been trained to be polite to principals/teachers, not to indulge in reasoning and avoid meddling in the teaching learning process. Their performance will also be monitored and action will be taken if any genuine complaints come to surface against them. The IMU is independent of the department’s control. They have to submit data immediately from the school they visit. This has been done to save the system from data/record-tampering."

Lack of basic facilities at schools is a big problem. Over 20 per cent of the functional public schools in KP still have no boundary walls, 30 per cent no water supply, 42 per cent no electricity and 16 per cent no toilets facilities.

The KP Chief Minister, Pervez Khattak, recently issued directives of handing over the monitoring of all hospitals and basic health units to the IMU. But the system has been put in place in the education department only. The IMU has been empowered to monitor only schools in the public sector while education offices and private schools are still out of its ambit.

It is hoped the IMU will help pinpoint "ghost schools and proxy teachers" (the IMU, as reported, has detected 12 proxy teachers, four women among them, in government schools in Buner district recently), improve teachers’ attendance and make it easy/possible to take action against the corrupt and negligent elements in the department.

Most of the principals and head-masters of the E&SE Department support the initiative. They say teachers’ attendance and punctuality have improved significantly ever-since the launch of the IMU.

Mumtazuddin, a principal of a government higher secondary school, is all praise for the IMU. He says the IMU is a sort of an external counter-check upon the internal supervision system of the department. External or a third-party check, he says, is done everywhere in the world. "Officers fail to visit schools even in years. With teachers and internal monitors (administrative officers) mostly shirking responsibilities, the IMU is the need of the hour," he says.

"Intra-district shuffling of monitors is being carried out every month to prevent the problems/dangers of familiarity/rapprochement between teachers and monitors. These dangers could be further minimised by inter-district shifting of monitors," according to another principal.

Some teachers support the move: "One of the biggest problems is the flawed monitoring system. Exceptions apart, our departmental monitoring system is too politicised, powerless and under-funded. One hopes the IMU will be kept safe from political interference, corruption, and data-delaying/tampering for whatever reasons. Much will depend also on whether its recommendations will be executed," a teacher says.

But some term it ‘an unwarranted and inapt’ move that would ultimately bring little/no change. They say schools and teachers are monitored by head masters, and inspected by cluster heads, district education officers, directors, local bodies members, national and provincial assemblies’ members and chairman and members of the PTCs.

"There was no need to establish the IMU. Rather, the government should have strengthened/empowered the internal monitoring system. Schools should be left to the district education officers. Principals and officers should be empowered and political intervention in appointments and postings should be eliminated. Good administrators could do wonders," says a teacher.

"Principals and administrators would also definitely give good results if facilities like smart-phones with GPRS connection and powers are provided to them and they are also made to report their inspection report immediately. Biometric attendance system at schools can also improve teachers’ punctuality. But teachers’ performance also needs to be improved. Principals should be explicitly authorised to hire new teachers from PTC or other school funds," he argues.

Another teacher complains that earlier principals/headmasters and the district officers used to report on deficiencies and requirements of teachers, chairs, desks, books and other basic facilities regularly but these were scarcely fulfilled. Now monitors do the same, but will the government act upon their reports/recommendations? Khan responds the government will ensure speedy action on their reports and recommendations concerning administrative and financial matters and will allocate resources.

Khan says: "Rather it is a quest for excellence. Why would one have gone for this if the earlier internal monitoring system had been successful during the last 65 years? Our history proves and no one can contest that it has failed to deliver and that a change was needed."

Another teacher, wishing anonymity, says: "The monitors visit a school once or twice a month. What if a teacher, who is otherwise punctual and dutiful, is on-leave or late on the monitor’s arrival date(s). Won’t that cause a negative and wrong perception about him in the IMU system?" He adds: "Educational monitoring is too technical a job to be left to inexperienced monitors. This is bound to fail."

It means a monitor will check around 250-280 teachers and 58-60 schools. The monitor-employee ratio will be 1:350 if education offices also come under their oversight.

Besides weak monitoring mechanism, crowded classrooms, indifference of teachers and administrators and political interference, lack of basic facilities at schools is a big problem. Over 20 per cent of the functional public schools in KP still have no boundary walls, 30 per cent no water supply, 42 per cent no electricity and 16 per cent no toilets facilities.