Going from bad to worse 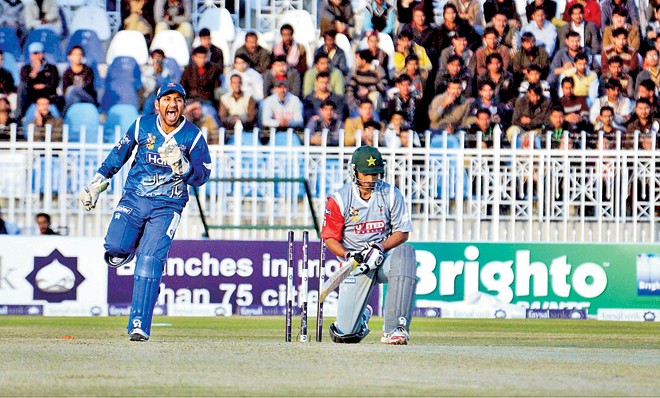 So Pakistan continued its tradition of having more T20 tournaments than anywhere else with the Faysal Bank T20 Cup this week. On paper it was supposed to be the worst of the lot, and it turned out to be so.

Yet through all the negatives there was a confirmation of the lessons learnt by a decade of domestic T20 tournaments holding true once again.

Firstly, the idea of having 17 teams in the competition was wrong to start with and it has turned out to be so. A dilution of quality is never the cure for any ailment, particularly in a system like Pakistan’s where it already is the most frequent of complaints. The first day of the tournament was washed out and all the time was thus spent on discussing how idiotic the decision to dilute the talent was. The first-class system is already a mess -- something that people within the PCB admit to -- where there are several hundred players playing "first-class cricket" but all of different standards. A run in the Quaid-e-Azam Trophy shouldn’t count as even half a run in the President’s Trophy but both are counted as equal.

In this case some runs really are more equal than others.

The increase to 17 teams is actually a good idea, even when ignoring the political advantages of it.

Pakistan cricket has struggled to truly maximise its talent pool and by having teams in northern Sindh and eastern Balochistan the PCB can create an avenue for untapped regions. But, that increase in teams should have come with a division of the competitions. Having an 8-team top tier and 9-team lower tier with annual or biannual relegation and promotion should have been the idea on the table. An increase to 17-team single tier only reduces the quality of cricket -- something that both the involved players and the fans would not want. Such a structure would also provide tangible goals and benefits for all the teams involved: if you aren’t good enough to win then you should at least aim to stay in the top tier, and everyone in the second tier would aim for a position at the best table. Right now teams like Quetta Bears, most obviously, have had a decade of existence where all they have to show for their presence is the occasional victory that means nothing in the greater scheme of things. How exactly are you supposed to develop a fan base or interest if you have nothing but the city’s name going for you?

The second lesson is perhaps more important. Make no mistake about it; Lahore has hosted this event far too often in the recent past. Of course there are mitigating factors to it -- in the past 16 months, twice the tournament has been shifted to Lahore -- once from Karachi and once from Pindi -- due to the security situation in those two cities at the time. But even then those tournaments could have been shifted to Fasialabad or Multan, for instance, where the appreciation for them would have been far more. Instead what we saw was empty seats and little attention until the final two days of competition. If we are going to have two competitions a year it makes sense to have one on rotation between Lahore and Karachi, and for the other to be rotated between the smaller centers. You could even add Rawalpindi/Islamabad to the Lahore and Karachi rotation so that even the fans in the big cities have to wait three years for their event, and thus increase the prestige of the tournament in those places.

If the fans know that the event is a rarity then those first few days will have big crowds too -- unlike what has been the case in both Karachi and Lahore over the past couple of years.

Over the past fifteen years when even Test cricket was taking place in Pakistan, the turnouts in the bigger cities compared to the smaller centres was quite clear. And right now this event does mean a lot in a country where international cricket is like a long forgotten dream now; at the last event I met several people from all across Punjab who had come to Lahore to specifically watch the final. By rotating tournaments around the country the PCB would also be serving a bigger segment of its fans base than if it continues to have it at the Gaddafi over and over again. No longer will a college student in Peshawar need to come to Lahore to watch his favourite players play -- instead the tournaments in Peshawar or Pindi would serve as his go-to events.

And the final lesson, of course, was related to the first lesson. Pakistan cricket is now bigger and more diverse than it has been through most of its history. Even with the money and the facilities concentrated the fact is that Lahore and Karachi are no longer the be-all and end-all of Pakistan cricket. No Karachi team has yet won a T20 competition; the Lahore Eagles have failed to make a single final. This time round, we were one match away from having only one of the four Lahore and Karachi team in the quarter finals. So, it seems obvious that its time that these two cities have single teams, like everywhere else. Quite simply they don’t deserve to have two teams, and perhaps a concentration of talent might be good for both the fans and the players. We might actually see a Karachi side win something for once and make the talking heads proud.

It is such a shame that a one sport country can’t even truly appreciate its one sport, but with international cricket no longer here, the PCB needs to do more than is necessary. In matters of crisis, trundling along and calling it resilience really isn’t a long term strategy.

Going from bad to worse