A home far away from home 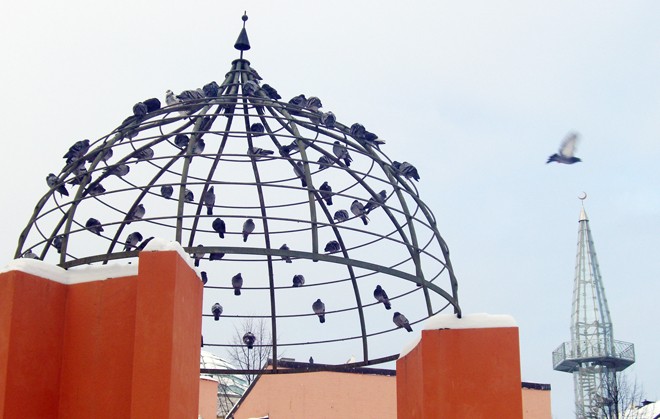 Grønland is an area in the inner city Oslo, just east of the city centre. It is probably Norway’s most multicultural area and a hub of Oslo’s immigrant population. Most Pakistanis who came to Norway, in early 1970s, settled here because it was cheap to rent accommodation without facilities such as shower and flush toilets.

Some citizens feared Grønland was turning into a ghetto and began pejoratively calling it "Little Pakistan".

The government decided to modernise the east side of Oslo in 1978. Consequently, in the 1980s, all of the old buildings were either renovated or replaced with new ones. The idea was to provide everyone access to modern toilets -- over all a better standard of living.

However, the renewal activities coincided with a major boom in the housing market resulting in major financial problems for many residents. Ironically, the area became so expensive that many were not able to pay the increased cost and were forced to leave.

After modernisation Grønland became a cool and trendy place to hang out. Perhaps that’s why some compare it with "Jackson Heights" in New York and "Southall" in London.

The contribution of immigrants and Pakistanis to make this area lively, colourful and multicultural is indisputable. In the mid 1970s the first Pakistani grocery shop called Zahoor Store opened. Now here is a variety of shops -- one can get spicy Chapel kebab at Tandoori Curry Corner, channey in typical Lahori style at Lahoree Dera, jalebi at Madina Sweets, barfi at Yaadgar Sweets and probably the city´s best grilled lamb chops at Kebabish Original, one of the fastest growing British restaurant chains in the world.

The area’s most famous desi eatery is Punjab Tandoori, started by Harinder Singh in 1990, offering traditional desi food at cheap prices. Such trendy cafes Café con Bar and Datteratil Hagen are also here. The latter is anchored in a historic building from the 1800s.

If your tummy is full and you want to feed your brain, go to Muhammad Anwar Soofi´s to browse through Urdu books and almost any Pakistani newspaper. Soofi, a known character, is active in Norwegian-Pakistani associations. In fact there is a Norwegian book about his life called Bookseller at Grønland.

The Islamic Cultural Center and Jamea Masjid of Central Jamaat-e Ahl-e Sunnat, with a capacity for 2500 people, is also loacted here. Close to it is Noway´s first mosque with the traditional minaret, the Mosque of World Islamic Mission.

Norway’s first Muslim funeral bureau Al-Khidmat, founded in 2002, has its office here. Previously, many Pakistanis were sent to their home country by plane for burial, but the number of dead buried in Norway is increasing.

The cosy and relatively small shopping mall Grønland Basar is reflective of the area’s multicultural lifestyle. The shopping mall consists of both an exciting new construction and the charming Grade II-listed building, owned by the 90-year-old Norwegian business tycoon, Olav Thon.

The only street in Norway named after Rubina Rana, who died of cancer at the age of 47 in 2003, is in this area as well. Norwegian-Pakistani politician. She was married to well-known Urdu poet Jamshed Masroor.

Grønland has also made its mark on pop culture. The storyline for TV2’s action series Fox Grønland takes place in Grønland. And numerous authors such as Tone Homes, Mala Naveen and TorgrimEggen have used this setting to build their stories.

Grønland presents a lively culture in an otherwise quiet city. Björn Larsson, a Swedish film student living in Norway since 2003, thinks Grønland is the best Oslo district. ‘You always see different people, experience different cultures and a good atmosphere here,’ he says. He often ends up here in search of vegetarian food at a decent price or to buy fresh fruit and vegetables, or simply to go for a walk. He doesn´t think that the area is a ghetto, but believes there are a few social challenges for politicians to resolve.

Waqas Hussain, born and raised in Norway, works as a counsellor for victims of violence. He lives at Rubina Rana’s gate and loves this area because of its vibrant culture and central location. "Everything is within walking distance. I never feel unsafe on the streets. I don’t understand why Grønland is called a ghetto," he says.

Haqiq Dutt, arrived from Kashmir in 1986, and is now settled outside of Oslo where he runs a transport company. He prefers to shop and hang out with friends here. He finds Grønland extremely multicultural, welcoming and cosy, hence unique. He likes the fact that one can find anything one needs here.

He believes that the ghetto image is exaggerated by those who don’t have friends with minority backgrounds and don’t live or visit the area.

However, the area around the metro station in Grønland is a little rundown, where drug activity is common and remains unchecked by the police. Also, most of the schools in this area are dominated by children of immigrants with poor Norwegian language skills.

Undoubtedly, the area once called ‘Little Pakistan’ as an insult has turned into one of the city’s hotspots and is getting more attractive.

A home far away from home