In search of an elusive creature 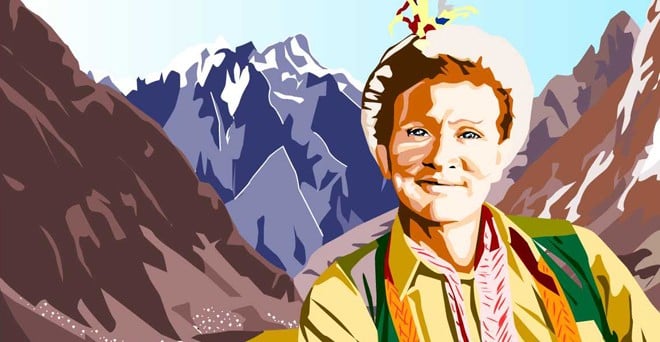 A few years ago, I received a mail from a friend with interest in cryptozoology, asking me to accompany him to the Northern areas in search of Barmanu, a mythical creature since I had recently written about another one. Despite many promises, I could not bring myself to go.

In December 2013, I got a chance to visit Bhamborate valley along with Shoaib Jadoon, the dynamic Deputy Commissioner of Chitral, with a view to meet the Kalash people and look into their problems, finding a solution to improve the flow of tourists in the region.

The people of Kafiristan excited the curiosity of a young cavalry officer Captain Robertson during the Second Afghan War (1879-80). He met them again at Chitral in 1888 when he visited this mountainous region with Colonel Algernon Durand. He wrote in his memoirs, The Making of a Frontier "a fine representative set of savages who had come to escort him [Robertson] into Kafirstan."

Determined to unravel the mystery of this strange race, Captain Robertson (later Sir Geroge Scott Robertson) visited the Kalash valleys in 1889, not as an emissary of the Raj but as a doctor in order to tone down the hideous jealousies amongst the Kafirs which were raised on seeing English presents laid down in Mehter’s court in Chitral. Robertson recorded his observations in his book The Kafirs of the Hindukush regarding all aspects of the Kafir’s life, history, origin, culture, customs, tribal feuds, and religious ceremonies at a time when the amalgamation of these people with the dominant Muslim neighbours was minimal.

However his book did pick up a controversy regarding the origin of this race from Alexander’s lost legion to Xerxes banishing Greek slaves to Bactria, the remote eastern end of the Persian Empire, after the sacking of Athens around 490 BC.

More than a century after Robertson’s first visit to Kalash, I found the "murderous savages" of Kafiristan extremely poor, docile yet friendly and tolerant towards tourists on whose influx depends much of their local economy.

That day in Bhamborate valley, I visited among other places the multipurpose Kalash Museum set up with aid from the Greek government in 2004, a wonderful job in preserving a fast-fading culture. A part of the museum building is also used as a school for the Kalash children and is run by the local community.

I was then guided by Shoaib Jadoon to the burial ground of the Kafirs, the Shenitan according to Robertson "where the tribal dead repose in huge coffin-boxes placed in the hillside -- near but not too close for such places are impure for the higher ecclesiastics of the Kaffir faith."

Weather-worn coffins of the dead were haphazardly placed, many of them broken due to vandalism while others were falling to pieces from age. Khalid, the Wakil Sahab from Chitral, led us to an unusual grave. The tombstone tells us that the occupant, whose mortal remains lay in Bhamborate, was a zoologist by profession and a Spanish Kafir rather than a Kalash.

It was interesting to find out what led this extraordinary man to the remote corner of the world and ultimately to his death in the land of Kafirs.

Ape, man or what?

The Barmanou (or Barmanu) is a bipedal humanoid primate cryptid reported to be living in the mountainous region of North Western Pakistan. Sightings have been reported by shepherds living in the mountains. The word Barmanou, which is used for the Pakistani equivalent of American Bigfoot or Tibetan Yeti, is also used in several regional Pakistani languages, including Khowar (in Chitral), Shina (in GB) and Kashmiri.

The proposed range of Barmanou is in the Chitral and Karakoram ranges, between the Pamirs and Himalaya. Thus, this puts its range between two cryptids -- Almas of Central Asia and Yeti of Himalayas.

Barmanou is supposed to possess both human and ape-like characteristics, including the tendency to abduct women and attempting to mate with them. In the last few decades, though no such incidences of abduction and rape of local women by this creature have been reported. Some witnesses have reportedly seen this creature wearing animal skins on its back and head.

Barmanou appears in the folklore of the northern regions of Pakistan and nearly all the stories tend to describe it as an ape or a wild man. Sightings of Barmanou have been reported from the Alai valley in Kohistan district as well. Some local witnesses and nomadic Gujjar shepherds taking herds to remote pastures in high ranges in this area consider the encounters with this wild ape man as a routine matter.

During my frequent ramblings in Kohistan and neighbouring Chilas districts in connection with Diamer Bhasha Dam project, I could not record a credible sighting of this creature by the locals.

The mystery of this wild man deepens when one considers the fact that none of the witnesses or investigating zoologists has ever discovered its dwelling and only have vague references of caves or an underground abode. It is equally intriguing that nobody has been able to photograph the elusive being.

Jordi Fedrico Magraner, born in Catalan, Spain in June 1967, was among the leading cryptozoologist of the world. Cryptozoology is a specialised field of zoology dealing with the study of and search for animals and especially legendary animals (as Yeti) in order to evaluate the possibility of their existence on scientific grounds.

Magraner came to Chitral in 1992 in search of Barmanu, the Pakistani equivalent of the abominable snowman. He, along with his team, combed the wild heights of Hindukush searching for scientific evidence regarding the presence of this legendary creature. From the valleys of Kafiristan sometimes Magraner would wander for weeks in Nuristan, the neighbouring province in Afghanistan.

In May 1994, during his trek to the Shishi Kuh valley in the Chitral, Jordi Magraner, Dr. Anne Mallasseand and another associate, all Europeans, reportedly heard two series of unusual guttural sounds that could have been made only by a primitive primate voicebox. It was late in the evening and, in fading light, it was not possible to follow the creature making the calls. But the team tracked down witnesses who claimed to have seen the foul smelling animal that made the sounds.

I tried to gather more information about Jordi Magraner, an amazing man with extraordinary interests from the local population. Everyone remembered him with fond memories. He took up a local dwelling on rent and lived like a native, wolfing down local cuisine.

Not bothered by the harshness of weather, he would wander for weeks, all alone, in the wilderness chasing the elusive Barmanou. His constant companions were his seven pet dogs and two horses. Locals described that one of his dogs was as large as a mule, possibly a Great Dane.

I was told that Magraner would frequently drift through the porous border illegally into Afghanistan in the 1990s, where he befriended Ahmad Shah Masood, the Mujahideen commander then known as the "Lion of Panjshir". He was also known to have helped a few ‘Kafirs’ that got into trouble in Afghanistan through him. But Ahmad Shah Masood died in a suicide attack and subsequently the neighbouring provinces were taken over by the Taliban.

After 9/11, the area descended into chaos and it was then that Magraner ran out of his luck. Tempted to make one last attempt to get hold of the elusive Barmanou, he wandered deep inside Nuristan and was held hostage by an armed militant group for at least three months. Nobody reported this incident to the authorities simply because Jordi Magraner was on the other side of the international border and that too illegally.

It is said that he grew a beard and pretended to have converted to Islam. The plan worked and he was released with honour -- but not for long.

Back in his favourite valley of Kafiristan, he started openly criticising those who held him hostage and publicly denounced his newly-adopted religion. I was told he became a Kafir in late 1990s and took part in all their rituals.

His open defiance probably could have contributed to his death, though details about his last days are murky.

Jordi Magraner had two servants, one a local Kafir boy and the other an Afghan lad. On August 2, 2002 -- a month before he was planning to finally leave Chitral for France, since this is where he chose to settle down -- he was enticed away from Bhamborate, as the local rumour goes, by his Afghan servant to a village near the Afghan border.

The next morning Jordi Fedrico Magraner and his Kafir servant were found murdered in their hut with the Afghan missing. No trace of the Afghan servant was ever found and so the motive of this gruesome murder remains shrouded in mystery.

Whatever the motives, it was a sad loss to the world of cryptozoology. Shtukdari, the dominant tribe of the kafirs of Bhamborate valley, claimed the body of Jordi Magraner as one of its own. A three days costly funeral festival was arranged for their beloved Magraner who lies buried in their graveyard "as one of theirs".

In September 2002, Magraner’s brothers Andrie and Audge and his sister Esperaza arrived in Chitral to take his remains to Spain for a proper Christian burial. But the move was resented and resisted by the Kalash people who had claimed that Jordi Magraner willed it to be buried here and their gods were not to be disturbed.

And, so, he left behind an unmatched legacy by being the first westerner to be buried in a Kafir graveyard.

In search of an elusive creature