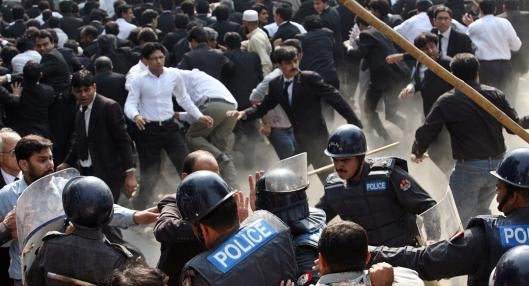 Some years ago, on March 16, 2009 to be precise, when Iftikhar Muhammad Chaudhry (along with other deposed judges) was restored to his constitutional position, riding on the wave of a euphoric legal community and the media, most of us were convinced that the constitutional revolution of our time had finally arrived. The letter and spirit of our constitution would now reign supreme. No one -- regardless of who their ‘pater’ is -- would be above the law. Democratic institutions would be strengthened.

As the sun finally sets on the tenure of Iftikhar Chaudhry in the honourable Supreme Court, it is safe to say that the lofty promises of the Lawyer’s Movement have remained unfulfilled. In fact, the very individuals who formed the core of Iftikhar Chauhdhry’s support base are now disoriented with the justice and jurisprudence meted out by the apex Court.

Was this journey to disillusionment all too inevitable, in pursuit of idealistic goals? Or has the conduct and jurisprudence of the Supreme Court contributed to this decay? Is hope in the spirit of constitutionalism tarnished irreparably? Or can the apex Court, under a new leadership, take deliberate steps to stem the rot?

To go back to March 9, 2007, an individual’s refusal to resign became the symbol of judiciary (as an institution) standing up to the military might of the general. The resulting battle-cry of ‘independence of judiciary’, almost overnight, replaced the policy of deference. As Bar Associations and opposition political parties rallied behind this cause, the nation was introduced to the promise of the ‘rule of law’ as the alternative to the ‘rule of men’.

Restored on the promise of idealism, and forgiven for all its past mistakes, the Court decided to test the boundaries of its newfound authority, and the talismanic power ‘independence of judiciary’. Court proceedings became sermons on morality and governance. To question the court, or even to argue a point of law that displeased the bench, became an affront to the independence of judiciary.

What exactly was meant by this ‘independence’ remained undefined. Quoting phrases from the Objective Resolution (Article 2A of the Constitution), from Article 175(3) of the Constitution (Separation of Judiciary from the Executive) and examples from Islamic history, the Court was able to use the sword of judicial independence to counter all questions concerning appointment of judges, judicial accountability, financial oversight of judicial accounts, constitution of benches, allocation of cases, appointment of court officers, and even the personal conduct of the family members of the honourable judges.

As the 18th Amendment was passed, a unanimous parliament, in its wisdom, decided to amend the constitutional process of appointing judges to the superior courts. Previously, under the dica of Al-Jehad Trust case, the authority to appoint a judge, while done by the president, was the exclusive power of Chief Justice of Pakistan (read: pater familias). Through insertion of Article 175A of the Constitution, the parliament created a judicial commission (that initiates a nominee) and a parliamentary committee (that confirms the nominee) for appointment as a judge.

Considering it a direct attack on the independence of judiciary, the Court threatened to strike down the 18th Amendment, even while the constitution (which ‘creates’ the Supreme Court) allows no power to the court to strike down a provision of the constitution itself. At the end, to avoid dissent from a few judges, the Court settled with directing the parliament to "reconsider" the amendment, since it offended the independence of judiciary.

Our jurisprudence had still not recovered from this, when the Public Accounts Committee took on the audacious (irreverential?) task of asking the honourable Court to disclose its expenditures and accounts. The request of PAC asked for a disclosure of sacrosanct issues, including how many residential plots had been allotted to serving and retired judges in their personal capacity.  Once again, the Court swung its sword of judicial independence to deny the disclosure of all such information, effectively arguing that the personal wealth of (even retired) judges is a matter that offends the independence of judiciary.

When the registrar of the Court was asked to appear before the PAC, this drive down from one building on the Constitution Avenue, to the next, was seen as a ‘brazen’ attack on the independence of judiciary, and resisted with vehemence and fervour.

Still recovering from the throes of this dangerous assault, the independence of judiciary once again came under attack when a real estate tycoon, through some television anchors, alleged that Pater Familias’ son had extorted money from him. Taking notice of the matter, the honourable Court passed a final judgment, based on an interim report (by the Suddle Commission), painstakingly observing that the allegations against Arsalan Iftikhar were nothing more than attempts to tarnish the independence of judiciary, and to unravel the ‘gains’ of the Lawyer’s Movement.

In so noting, the Court reprimanded the media for bringing such news into the open (without due investigation), in stark contrast to the earlier praises that the same Court had showered upon the media for unearthing financial scandals of politicians and their children. Free and open reporting, it seems, was only acceptable till such time that it did not infringe on the elastic notion of judicial independence.

This ‘independence’ doctrine, elusive in nature, needed legitimacy to survive.  Since such tangible legitimacy could not be found in the provisions of law, the Court tapped into the lingering sentiments of the Lawyer’s Movement within our legal fraternity. As a result, judgments that could not be defended in law, were instead defended through slogans of ‘Chief terey Janisar’ in quasi-political Bar Association events, frequently visited and presided over by the Chief Justice himself.

Over time, however, thinking members within each Bar -- who owe fidelity to the spirit of law, and not to any individual or institution -- found voice, once again.  Recovering from its hangover, the legal fraternity started to assess the gains and losses of the Lawyer’s Movement, questioning the method and legality of court’s decisions and conduct. It became clear that, under the garb of judicial independence (which, jurisprudentially, is to be used as a shield, and not a sword), the Court had frequently ignored provisions of the constitution (in cases relating to ECP), mandate of black-letter law (in issues concerning NAB) and even the basic principles of consistency and structure (in the exercise of suo motu powers).

In the aftermath, the past few months have been a humbling experience for the honourable Chief Justice, who has been denied farewell events by all major Bar Associations.

The challenge for the new leadership of the honourable Supreme Court will be to harness whatever capital it is left with, and set sail for a new course. A destination where judicial independence, while important and sacred, is not used as an instrument of asserting individual supremacy. It will be important to define ‘judicial independence’ in a way that opens the door of judicial mystique and expenditure to review and questioning by citizenry, who are the final custodians of power under our constitutional paradigm.  Such a court will not only be more respected but, owing to a renewed moral authority, will also in the process become more independent.